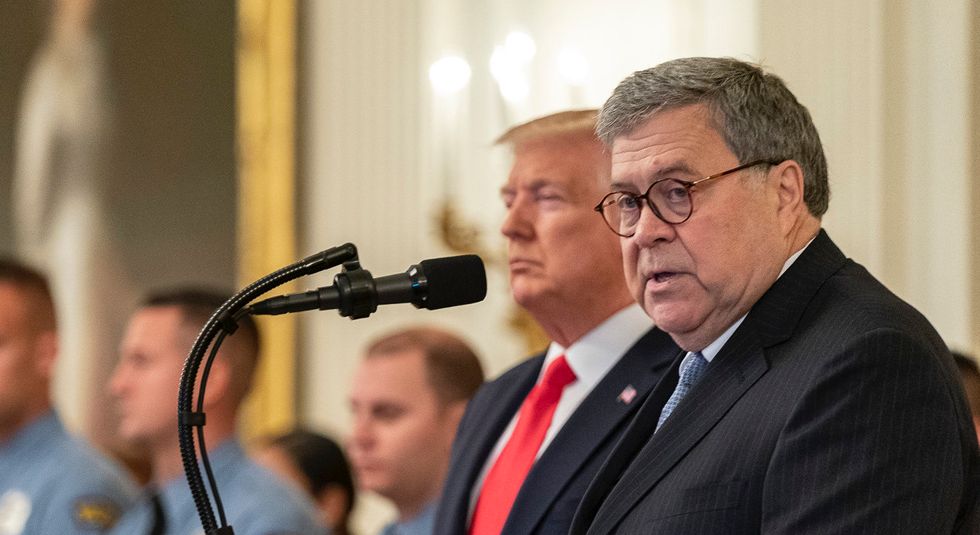 With Donald Trump doing everything he can to disrupt mail-in voting before the November 3rd election day, conservative Matt Lewis suggested the country could be faced with a "nightmare scenario" where the media calls the election for the sitting president before all the ballots are tallied, setting the stage for the president to refuse to step aside.

In his column for the Daily Beast, Lewis noted that the president's attacks on mail-in votes could backfire by discouraging older voters who might support him from participating and that Biden will likely be the recipient of the majority of those votes.

And that could be the problem that sets in motion a power struggle based upon the speed each state employs to count them -- and if Attorney General Bill Barr steps in and lends the president a hand.

As Lewis notes, "Although we can expect that an influx of tens of millions of Biden ballots will start piling up long before Election Day, states have different laws regarding when the mail-in ballots can be counted. And some states—including Michigan, Pennsylvania, and Wisconsin—don’t allow tabulations to begin until election day, which is to say you can’t keep a running count. "

Admitting counting could be "tedious, complicated, and time-consuming," Lewis said it is all but certain that the president will seize upon anything showing him leading to proclaim victory.

"If you’re watching the news on election night—the way we’ve always done it—the first votes to be counted will very likely be Trump votes," he explained. "Now here’s where things go from messy to scary. As previously noted, we have all been trained to watch the news on election night—and to expect someone to be declared the victor. Even if we manage to overcome this age-old reflex, broadcasters will be compelled to show the only results they have—the Election Day results. This could give the false impression that Trump has shocked the world again. It’s absurd to think they won’t do this."

As Lewis sees it, Trump would then appear f before the nation and "unilaterally declare victory" setting off an unprecedented battle with Lewis extrapolating, "This may sound pathetic and obvious and lame and defensive on his part, but this is Donald Trump we’re talking about. And maybe 40 percent of the country will believe him. After all, they’re watching the results! And Trump has been warning about voter fraud for months!"

Added to that, the conservative columnist said there will likely be reports of some voter fraud throughout the country which will add credence to Trump's claim of major voting fraud that he will undoubtedly use in his defense.

"It’s easy to imagine Trump’s attorney general casting aspersions on any ballots that aren’t counted on Election Day and issuing a report declaring Trump the victor. If that happens, I’m 100 percent confident the brave Republicans in the U.S. Senate will stand up to Trump. ('Uh, we’re gonna have to wait and see,' said sycophantic Senator X, 'but it does look like Democrats are trying to overturn the results of a fair election.)," he wrote, before warning, "Our union is tenuous as it is. The last thing we need is for another crisis over legitimacy."