Kamala Harris's career is built on a troubling Faustian bargain 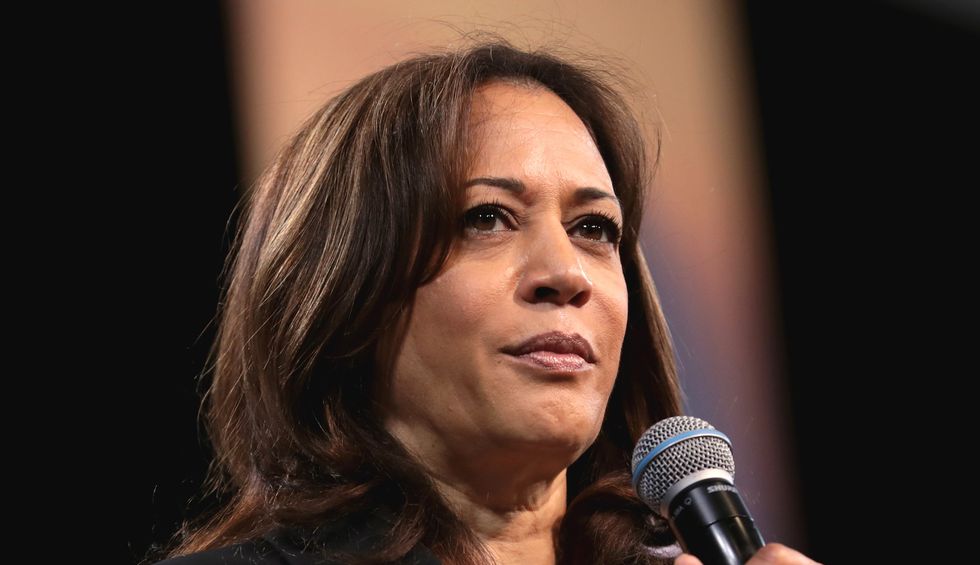 U.S. Senator Kamala Harris speaking with attendees at the 2019 National Forum on Wages and Working People hosted by the Center for the American Progress Action Fund and the SEIU at the Enclave in Las Vegas, Nevada. Credit: Gage Skidmore
Rory Fleming
and
Filter
August 13, 2020

When Kamala Harris was still San Francisco’s district attorney in 2010, she delivered a talk at the Commonwealth Club where she brought up a common activist slogan—”Schools Not Jails”—and mocked it as naive pandering.

Now that the former prosecutor has been tapped as Vice President on Joe Biden’s 2020 ticket, people like Nse Ufot, the chief executive of the New Georgia Project, are claiming that Shirley Chisholm, the first Black woman elected to Congress, is “smiling today.”

Is she though? Chisholm, who died in 2005, was an educator before becoming a politician—not a prosecutor. It is true that being a prosecutor is a “safe” route for a woman vying for high political office, as a New York Times article about the VP pick mentioned, but Chisholm did not take that Faustian bargain, even though law school was cheap in her era.

The prosecutor-to-politician ladder is Faustian because sociocultural norms shift, sometimes drastically. Many of the crimes of yesterday are the permissible norms of today, like recreational marijuana use by adults. A prosecutor always risks looking back years later and realizing they ripped apart some people’s lives for no morally legitimate reason.

Harris herself gets this, as someone who prosecuted people for marijuana when the substance was still illegal in California, even if she has since sponsored the MORE Act as a US Senator. Perhaps more infamously, as the San Francisco DA from 2004 to 2011, Harris championed a truancy law that ended up jailing some parents for their kids skipping school—a practice that is now widely condemned. She later misleadingly presented this as an “unintended consequence” of the law.

Even actions of Harris’s praised as “progressive,” like taking sex trafficking seriously, were wielded like double-edged swords; she brought the hammer of the law down on consensual sex workers, whom she treated as collateral damage, and this problem was a defining one during her tenure as California’s Attorney General. Much more recently, in 2018, she cosponsored the SESTA Act in the Senate, part of the SESTA/FOSTA package that conflated sex trafficking with consensual sex work, and made sex workers’ lives far more dangerous.

If Biden wins in November, Harris would be the first Black, Indian-American and female Vice President in US history. That in itself is truly welcome. Yet the excitement widely generated by this overshadows a weakness of the politics of “firsts” that is illustrated by Harris’s record.

Because of the centrifugal force of American bigotry, a too-common way to shatter racist and sexist political ceilings is to initially elevate politicians from underrepresented demographics who prop up the status quo.

In many local contexts, an elected Democrat of color whose policies match the oldest, whitest and most conservative faction of the party causes limited damage, and is at least preferable to the male, pale, stale version of the same thing. Yet the Kamala Harris VP pick—incredibly, in this moment, of a law enforcement figure—comes at what should be a turning point for the country. It sets her up to be a future presidential nominee, and perhaps the most influential politician we have, given the likelihood that she will outshine Biden on the national stage.

In many ways, Trump’s presidency represents the political last stand of white Christian fundamentalism. Younger Republicans are largely “fiscally conservative and socially agnostic.” While these younger GOP voters are still religious as a group, they are less so, and care less about imposing their personal religious beliefs on others through government.

As white people become a demographic minority in the United States, the GOP’s caustic rhetoric on race and immigration will have to be phased out for the party to survive. Unless the party somehow leans hard into its xenophobic streak, which is one possibility, unfettered capitalism that does the bare minimum to aid suffering, vulnerable people—what mainstream political analyst Jennifer Rubin calls “zombie libertarianism”—will be its future uniting thread.

In contrast, the Democrats could have been the human rights party, leaning ever closer to international norms such as universal healthcare. But Kamala Harris—who tacked unconvincingly to the left during her presidential campaign, offering inconsistent support for universal healthcare—is tepid and unimaginative even on issues where she is comparatively progressive, such as climate change.

Her battle plan as California AG was based on major lawsuits against polluters, but according to pro-fossil fuel consulting firm Rapidan Energy Group, she ducked a major suit against ExxonMobil for causing the crisis while misleading the public. (In contrast, New York Attorney General Laetitia James, another Black woman AG, followed through —and while her team lost the case, James noted the importance of Exxon having to answer the allegations publicly.)

With Kamala Harris’s lukewarm conversion to some left-ish positions, it is depressingly likely that the post-Obama Democratic establishment will offer anti-racist rhetoric without the bold policy agendas necessary to end vast structural inequalities.

While many Americans understandably celebrate Harris’s “firsts,” the context is that many other countries that are substantially less wealthy and less free by standard measures have already had their first female presidents. For a span of several years, Dilma Rousseff of Brazil, Michelle Bachelet of Chile, and Cristina Fernández de Kirchner of Argentina ran the majority of the South American continent, the result of legitimate democratic elections. Many women have led in Europe and Asia. There have also been democratically elected Black women heads of state, such as Ellen Johnson Sirleaf, who served as Liberia’s president from 2006 to 2018.

It is, perhaps, okay to stuff Harris’s past in a bag and let people be excited. Maybe she will surprise us by demonstrating a genuine change of heart. Maybe she will raise turnout in arguably the most important presidential election in history. Four more years of Trump would do untold damage to people of color and other vulnerable groups, stack the Supreme Court for a generation or more, and scorch US international legitimacy to a crisp. Nothing I have written is an invitation to not vote for the Biden-Harris ticket.

Neither should we feel afraid, however, to say out loud that Kamala Harris’s record is one of a morally expedient, short-sighted political operative whose policies have injured tremendous numbers of marginalized people.