How climate change could trigger large landslides and 'mega-tsunamis' 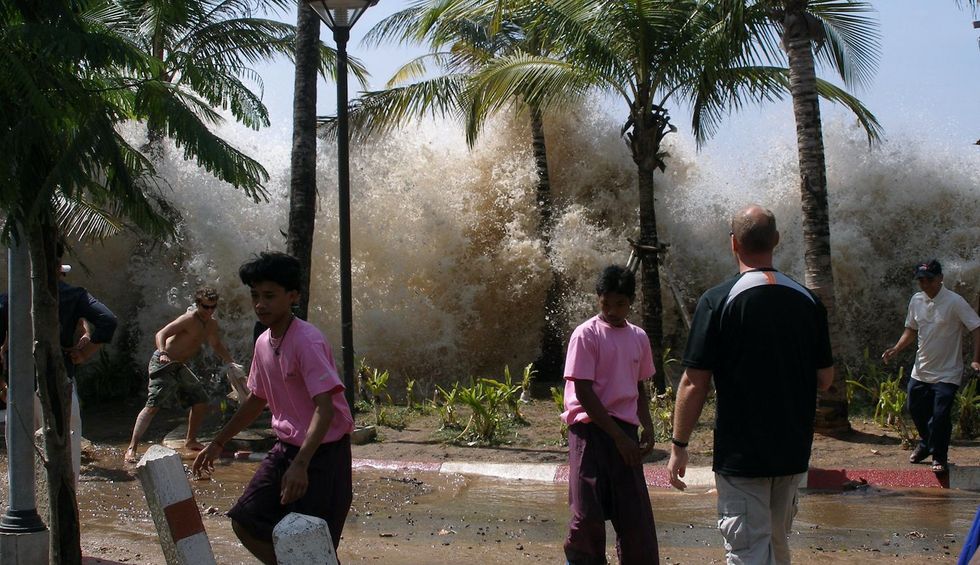 Just over 60 years ago, a giant wave washed over the narrow inlet of Lituya Bay, Alaska, knocking down the forest, sinking two fishing boats and claiming two lives.

A nearby earthquake had triggered a rockslide into the bay, suddenly displacing massive volumes of water. The large landslide tsunami reached a height of more than 160 metres and caused a run-up (the vertical height that a wave reaches up a slope) of 524 metres above sea level. For perspective, imagine run-up to about the height of the CN Tower in Toronto (553 metres) or One World Trade Center in New York City (541 metres).

Large landslides, like the one that hit Lituya Bay in 1958, are mixtures of rock, soil and water that can move very quickly. When a landslide hits a body of water, it can generate waves, especially in mountainous coastal areas, where steep slopes meet a fiord, lake or reservoir. Although mega-tsunamis are often sensationalized in the news, real and scientifically documented events motivate new research.

In late July, a 7.8 magnitude earthquake near Perryville, Alaska, triggered a tsunami warning for south Alaska, the Aleutian Islands and the Alaskan Peninsula. And scientists recently warned that a retreating glacier in a fiord in Prince William Sound, Alaska, had elevated the risk of a landslide and tsunami in a popular fishing and tourism area not far from the town of Whittier.

International research efforts are urgently underway to better understand these major natural hazards. This is critically important, since climate change could contribute to increasing the number and size of these events.

Triggered by either an earthquake or higher than normal rainfall, another massive landslide occurred in Alaska in 2015. This one was in Taan Fiord, 500 kilometres east of Anchorage. This event was so powerful, it released an enormous amount of energy and registered as a magnitude 4.9 earthquake, approximately equal to the explosive force of 340 tons of TNT.

The landslide impact into the water was so strong that it generated seismic signals that were detected at monitoring stations in the United States and around the world. The impact generated a wave with a run-up of 193 metres. Thankfully, the area is remote and no one was killed.

However, the 2017 landslide into Karrat Fiord, Greenland, was deadly. It generated a 90 metre high tsunami at the impact site. This wave propagated 30 kilometres to the community of Nuugaatsiaq, wiping it out and killing four people. Other major landslide wave events have recently occurred in Norway and British Columbia.

Tsunamis are also generated by other mechanisms including earthquakes, volcanic collapse and submarine landslides. Earthquakes can trigger massive submarine landslides, which have been shown to be major contributors to the maximum tsunami run-up. This occurred when earthquakes struck Japan in 2011 and New Zealand in 2016, resulting in run-up of 40 metres and seven metres in each case.

Large landslide tsunamis are difficult or impossible to measure in the field. They typically occur in mountainous regions with very steep slopes, and therefore are usually far from big cities. Geologists have documented many of the cases by mapping the run-up elevations or deposits of trees and rocks washed off slopes after these events, like in Taan Fiord.

But these natural hazards pose a major threat to society. What if a landslide into a reservoir creates a wave that overtops a dam? This happened in 1963 in Vajont, Italy, killing more than 2,000 people who lived downstream.

A better understanding of how landslides generate waves is crucial. Experimental studies are a way to gain insight into these waves. Laboratory tests have led to empirical equations to predict the size of landslide tsunamis.

Recent research with detailed measurements using high-speed digital cameras is helping to determine the controls of the landslide properties on the generation of waves. This has led to new research at Queen’s University that has improved the theoretical understanding of how landslides transfer momentum to water and generate waves.

The wave size depends on the thickness and speed of the slide at impact. The shape of these waves can now be predicted and along with the wave amplitude (the distance from rest to crest), and be used as input to computer models for wave propagation and full simulation of landslide wave generation. These models can help understand and predict the behaviour of waves at the laboratory scale and at the field scale in coastal environments.

Past and future events

Since 1900, there have been eight confirmed massive wave events where large landslides have generated waves greater than 30 metres high. Two of these led to over 100 deaths in Norway in the 1930s. Of these eight major events, four have occurred since 2000.

However, other events with smaller waves have devastated more populated coasts. For example, the collapse of the Anak Krakatau volcano in 2018 generated a tsunami on the coast of Indonesia that caused over 400 casualties and major infrastructure damage.

Will more of these events occur in the future? Climate change could influence the frequency and magnitude of these natural hazards.

A warming climate certainly changes northern and alpine environments in many ways. This can include permafrost thawing, retreating glaciers and iceberg calving, more frequent freeze-thaw cycles and increased rainfall or other hydraulic triggers. All of these can contribute to destabilizing rock slopes and increase the risk of a major landslide into water.

These natural hazards can’t be prevented, but damage to infrastructure and populations can be minimized. This can be achieved through scientific understanding of the physical processes, site-specific engineering risk analysis and coastal management of hazard-prone regions.