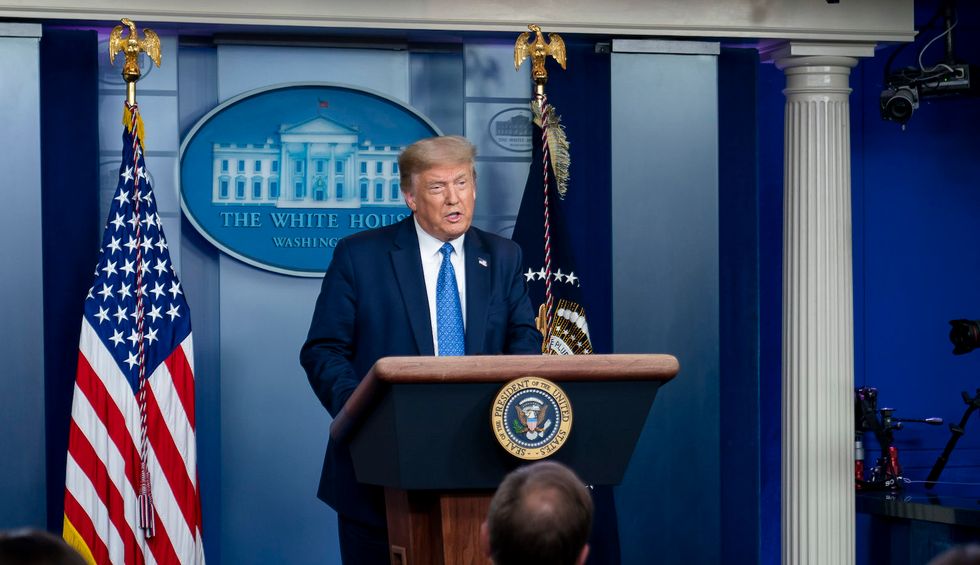 After a short interruption due to a shooting near the White House, President Donald Trump gave a supremely deceptive and misleading press conference on Monday afternoon.

Daniel Dale, CNN's leading fact-checker of the president, said it was notable for its dishonesty, even when judged by the incredibly low standard Trump has set.

"They’re all at least pretty bad, but that was one of the worst Trump press conferences in a while from a truth standpoint. Fast and furious lying," Dale said in a tweet.

1. Trump was called out on his lie about pre-existing conditions.

Over the weekend, the president claimed he would sign an executive order guaranteeing that health insurers would cover pre-existing conditions. The only problem with this claim is that it's already a part of Obamacare, Trump is trying to destroy Obamacare through a lawsuit, and the policy couldn't be accomplished by executive order.

Despite Biden's professed Catholicism — and the manifest emptiness of Trump's own claims to be religious — the president stood by his claim that the former vice president wants to "hurt God."

3. The president yet again dismissed the effects of COVID-19 on children, even though it can kill them, in rare cases, can cause severe illness, and can spread to others.

4. Trump lied and said he wouldn't have called for Obama's resignation if he had the same performance in the face of the coronavirus.

We have a very good idea of how Trump would have responded to Obama if he had been faced with COVID-19, because we saw how he reacted to Ebola. Despite the fact that only two Americans died during the entire Ebola outbreak on Obama's watch, Trump — and much of the right-wing media ecosystem — spent months fearmongering about the virus in the run-up to the 2014 midterms. Trump even tweeted the following:

If this doctor, who so recklessly flew into New York from West Africa,has Ebola,then Obama should apologize to the American people & resign!
— Donald J. Trump (@Donald J. Trump) 1414107539.0

But when pressed on this hypocrisy, Trump said he should be praised for his handling of the pandemic, even though more than 160,000 people have died, and his own failures are plain to see.

This wouldn't be that big a deal — anyone can make a factual slip-up while speaking off the cuff — except for the fact that the Trump campaign has jumped on similar slips by Biden to suggest he's suffering from mental decline.