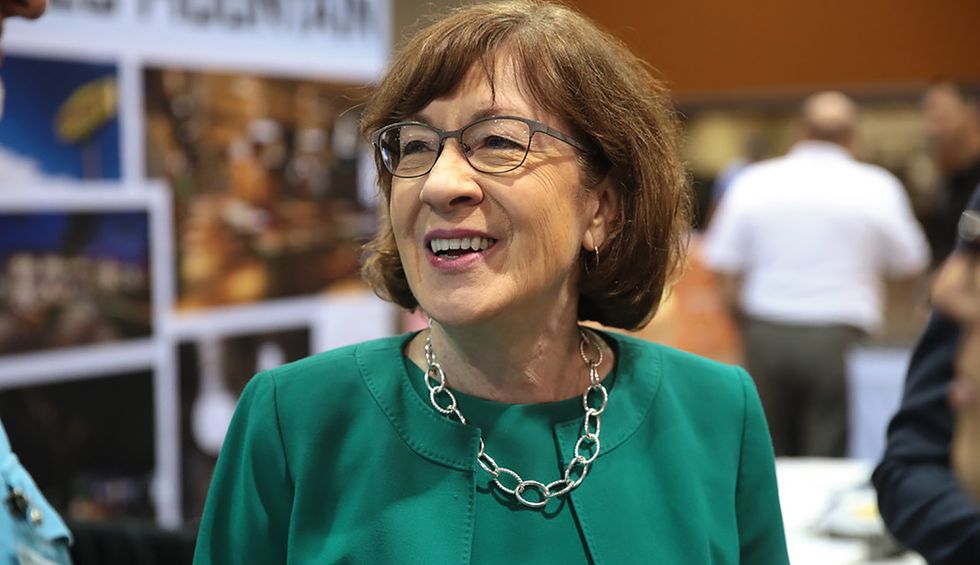 Sen. Susan Collins is concerned. While her colleague from Maine, the independent Sen. Angus King, calls Donald Trump's executive actions out for what they are—“unconstitutional executive orders [that] would accelerate the erosion of Congress’s fundamental powers and lead us further down the path to the undermining of the American experiment in self-governance,” leading the country toward an “elected monarchy“—Collins couldn't bring herself to condemn Trump's move, but does recognize it for what it is. Sort of.

“There are constitutional limits on what the President can do to help through executive orders,” she said, even though she didn't comment on whether Trump violated those limits. The Press Herald reports that they tried to find out, but Collins' "spokespeople said she was not available to answer questions about the constitutionality of the president’s actions." But she was perfectly willing to adopt the Republican line that it's all the Democrats' fault. “I hope the President’s actions will prompt Democratic leaders to negotiate seriously to reach a much-needed agreement to help struggling families, seniors, schools, businesses, municipalities & the USPS with this persistent pandemic,” her released statement said.

“Three times,“ she wrote, “Senate Democratic leaders blocked extending extra unemployment benefits to prevent their expiration during the negotiations.” Which is technically true, but utterly false in reality because when Democrats repeatedly attempted to bring up measures that would continue the $600/week universal income bump last week, Republicans blocked them. What Republicans were trying to pass was a $200/week boost, which not only would be totally inadequate, it would never pass the House. A House which, by the way—and which Collins seems to be conveniently ignoring this—passed a bill 11 weeks ago to continue the payments and do much, much more to try to save the country.

Collins' boss, Sen. Mitch McConnell, said at the time the House passed that bill (the HEROES Act) that there was "no urgency" to act. He then waited to act until all of the key CARES Act provisions protecting people financially were set to expire, and then wasted two more weeks negotiating with his own senators to come up with something that the House would never pass, setting up this massive collapse. In the meantime, Collins did absolutely nothing to push McConnell to act.

Something which Democratic challenger to Collins Sara Gideon pointed out. “For months, Susan Collins and Senate Republicans have refused to do what’s right for the American people during a pandemic. Donald Trump’s political theater does nothing to provide relief to states and municipalities, help schools, or expand testing—instead, it puts Medicare and Social Security at risk.” That is a very good point in Maine, which demographically speaking is the oldest state in the nation. Collins didn't say a word against Trump's effort to cut off payroll taxes, the revenue stream for Social Security and Medicare.

Last month, when it was clear that Congress wasn't going to approve Trump's obsession, i.e., the payroll tax cut, Collins was brave enough to oppose it. Now that Trump is trying to do it unilaterally, not a peep out of her about it. Collins' failure to stand up for Maine's seniors is something they're probably going to be hearing a lot about over the next few months.