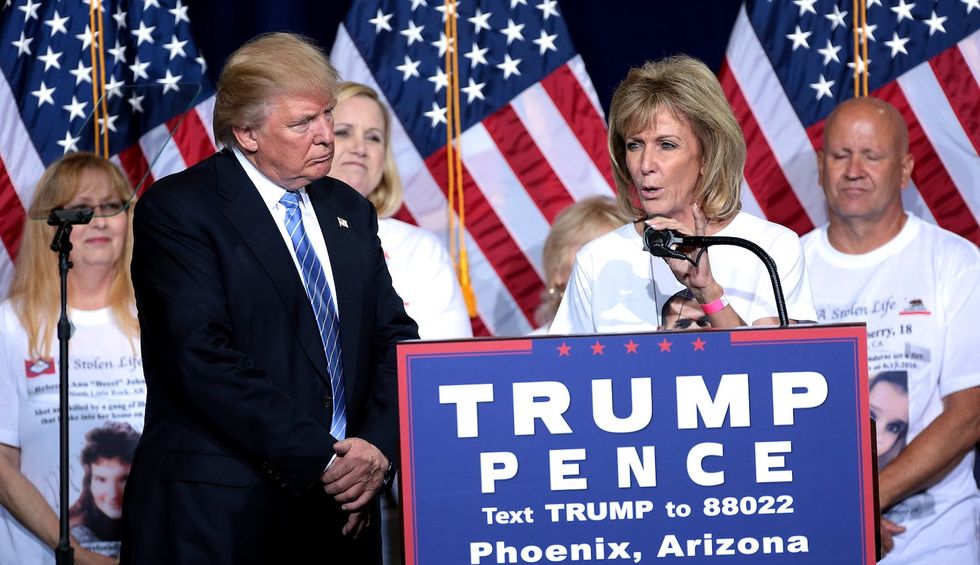 Mary Ann Mendoza, a so-called "Angel mom," was scheduled to speak Tuesday for the second night of the Republican National Convention. Hours before she was set to appear before the country, Mendoza sent out a tweet sharing a vile and pernicious anti-Semitic conspiracy theory. CNN reported that she will no longer appear at the event.

The Daily Beast was among the first outlets to report on the tweet. It was deleted after she posted it, but a screenshot was preserved below:

The thread it linked to remained, detailing a darkly conspiratorial history claiming that Jewish bankers formed a cabal and plotted against the rest of the world. It said, in part, that this plan sought to: "Use Economic Warfare. Rob The 'Goyim' Of Their Landed Properties And Industries With A Combination Of High Taxes And Unfair Competition. ... Make The Goyim Destroy Each Other So There Will Only Be The Proletariat Left In The World, With A Few Millionaires Devoted To Our Cause, And Sufficient Police And Soldiers To Protect Our Interest."

This is as clear and indisputable as anti-Semitism gets. The theory also included references to the modern QAnon conspiracy theory.

After the Daily Beast report, CNN reported that she had been pulled as a speaker:

The Daily Beast reported that Mendoza tweeted an apology after the outlet published its story:

Parker Malloy noted, however, that Mendoza has previously posted tweets that played into the same anti-Semitic conspiracy theories:

Mendoza, whose son was reportedly killed by a drunk driver who was not permitted to be in the United States, has appeared on stage with Trump before. Some anti-Semites have linked conspiracy theories about Jewish people to unauthorized immigration.

Mendoza is not the only person scheduled to speak at the RNC with disturbing beliefs far outside the mainstream. Abby Johnson, an anti-abortion activist set to appear, has previously said that it would be "smart" for police to racially profile her biracial son. She has also voiced support for limiting women's rights to vote.

Republicans have frequently attacked Democrats in recent years for supposed cases anti-Semitism. However, many in the GOP, including Trump, have made use of anti-Semitic tropes repeatedly, and the party frequently ignores or downplays anti-Semitism and other forms of bigotry in its own ranks.