Watch: Anti-masker rants about 'Nazis' after entire liquor store yells at her for not wearing a mask 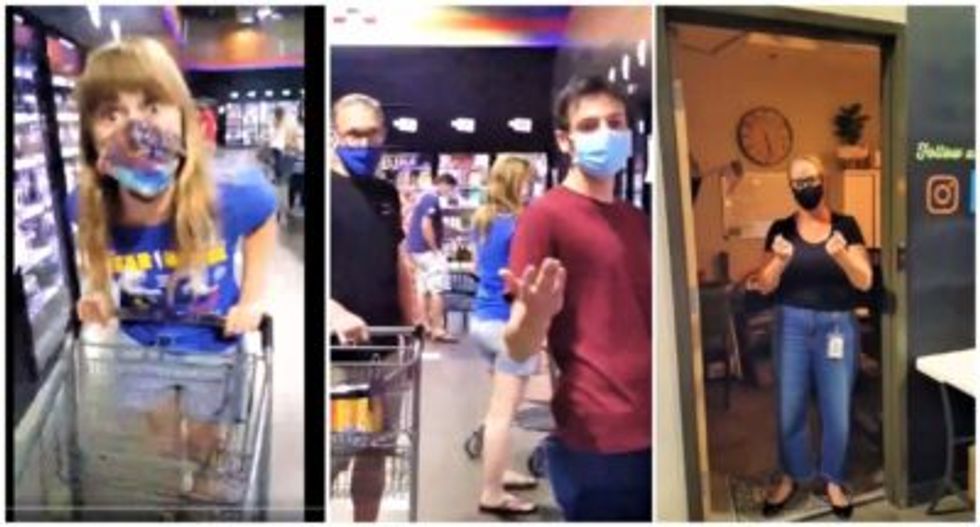 An entire liquor store full of customers and employees yelled at a woman who refused to wear a face mask while in the store -- and the woman wouldn't back down, while also refusing multiple requests to leave.

Independent Denver newspaper WestWord reports that the confrontation broke out earlier this week at Molly's Spirits, a popular liquor store in Lakeside, Colorado.

According to Westword, the video was filmed by a woman named Ruby Musso and was posted on her own Facebook page in an apparent attempt to get sympathy after multiple customers and workers shamed her for refusing to wear a mask.

The video starts off with an angry masked woman ramming her shopping cart into Musso's and telling her, "Please leave this f*cking store!"

Musso then tried to claim that the woman had "almost physically threatened me" by ramming her shopping cart, but other customers yelled back at her and told her to put on a mask.

"You're physically threatening everyone else by not wearing a mask!" one man shouted at her.

All the while, employees of Molly's Spirits politely tried to get Musso to leave -- but she refused and insisted on waiting until the police arrived.

When the employees kept pushing her to leave, she yelled out, "Look at these Nazis!"

While the woman tried to claim that it was supposedly illegal for stores to refuse her service for not wearing a mask, Westword notes that Colorado Gov. Jared Polis this week "issued a statewide order directing everyone in the state age ten and above to wear masks in public settings" and had "previously emphasized that businesses were in their rights to refuse service to those without face coverings."