Trump’s 'pathological unwillingness to admit error’ is a key reason why his campaign is ‘facing the abyss’: report 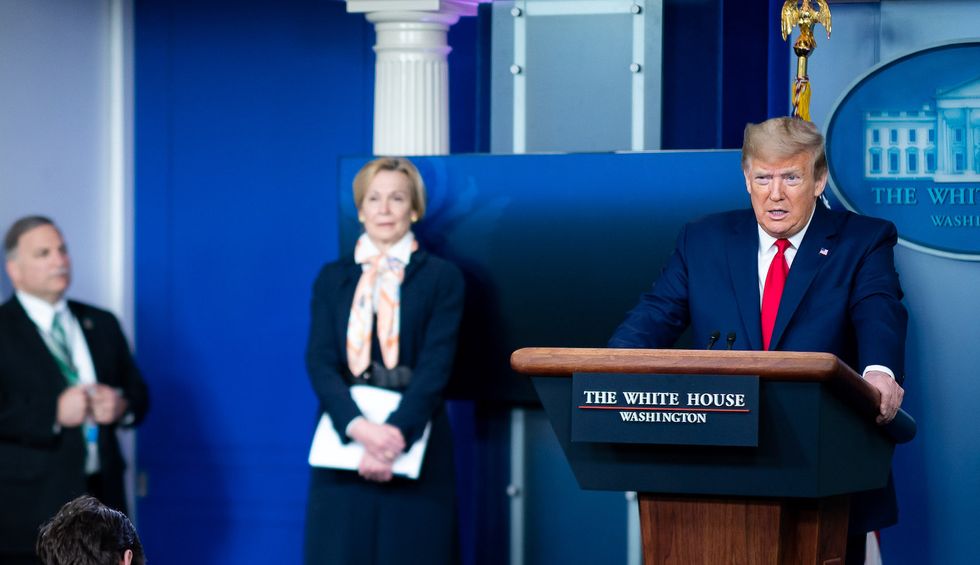 A long list of U.S. presidents have shown the ability to admit it when they made an obvious mistake, but not President Donald Trump — who has insisted on painting himself as infallible. And that inability to acknowledge mistakes, according to Washington Post reporters Ashley Parker and Philip Rucker, has done a lot to make Trump’s response to the coronavirus pandemic so flawed and problematic.

In an article published on July 27, Parker and Rucker stress that coronavirus — more than any other issue — is hurting Trump’s reelection campaign. The Post’s Glenn Kessler, on Twitter, cited Trump’s inability to admit to errors as the thing in the article that best explains why his campaign and the U.S. in general are “facing the abyss”:

Parker and Rucker report, “People close to Trump, many speaking anonymously to share candid discussions and impressions, say the president’s inability to wholly address the crisis is due to his almost pathological unwillingness to admit error; a positive feedback loop of overly rosy assessments and data from advisers and Fox News; and a penchant for magical thinking that prevented him from fully engaging with the pandemic.”

According to Parker and Rucker, Trump’s advisers and his political opponents agree on “one thing: the best way for him to regain his political footing is to wrest control of the coronavirus.”

“Both allies and opponents agree he has failed at the one task that could help him achieve all of his goals: confronting the pandemic with a clear strategy and consistent leadership,” Parker and Rucker explain. “Trump’s shortcomings have perplexed even some of his most loyal allies, who increasingly have wondered why the president has not at least pantomimed a sense of command over the crisis or conveyed compassion for the millions of Americans impacted by it.”

The Post reporters note that recently — with more than 146,000 U.S. residents having died from COVID-19 — the Trump Administration “has attempted to overhaul, or at least rejigger, its approach” and “has revived news briefings led by Trump himself and presented the president with projections showing how the virus is now decimating Republican states full of Trump voters. Officials have also set up a separate, smaller coronavirus working group led by Deborah Birx, the White House coronavirus response coordinator, along with Trump son-in-law and Senior Adviser Jared Kushner.”

However, they add, “the question is why Trump did not adjust sooner, realizing that the path to nearly all of his goals — from an economic recovery to an electoral victory in November — runs directly through a healthy nation in control of the virus.”

Ben Rhodes, who served as deputy national security adviser to President Barack Obama, told the Post that Trump’s campaign would be in much better shape if he had stayed on top of the coronavirus crisis.

“The irony is that if he’d just performed with minimal competence and just mouthed words about national unity, he actually could be in a pretty strong position right now — where the economy is reopening, where jobs are coming back,” Rhodes argued. “And he just could not do it.”

Republican Anthony Scaramucci, who briefly served as White House communications director in the Trump Administration in 2017 but is now an outspoken Trump critic, explained that humility has never been Trump’s approach — even when it would be to his benefit.