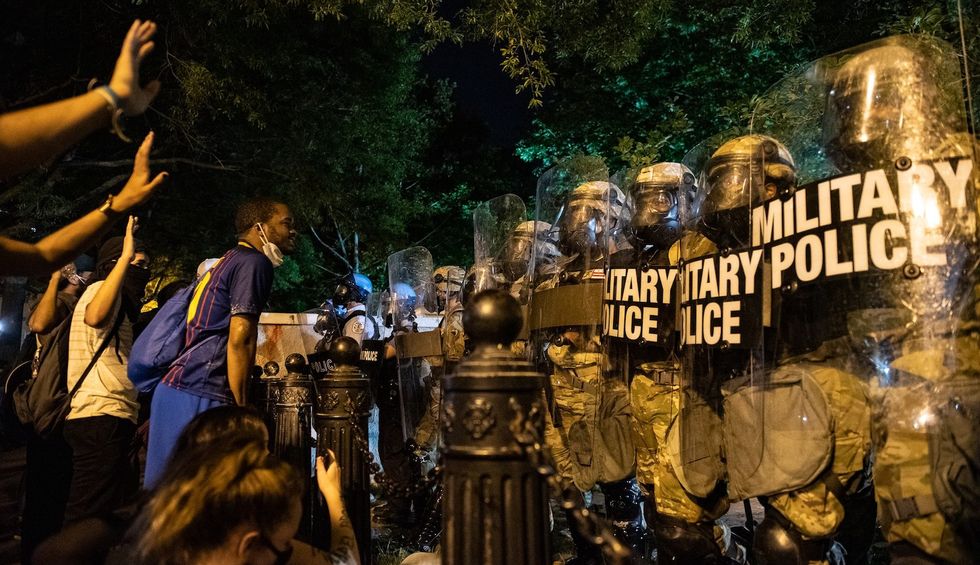 Amid mounting criticism over the deployment of unidentified federal agents to Portland, Oregon—where they have been driving around in unmarked vehicles and snatching people off the streets—civil liberties advocates are increasingly concerned that President Donald Trump will similarly send "secret police" to other Democrat-led cites across the country as part of a 2020 campaign strategy to sow chaos and further his law-and-order message.

"Part of Trump's reelection strategy is to scare the white suburbs, which polls show have soured on him, with 'urban' (read: minority) violence," University of Michigan history professor Juan Cole wrote Monday for his website Informed Comment.

"It now appears clear that part of that strategy is to send federal agents dressed like Iraq War troops to Democratic-run cities, on the pretext of protecting federal property, and then for them to attack and provoke Black Lives Matter and Defund the Police protesters, causing violence to escalate and using it... to scare the suburbs," Cole continued. "The exercise also has the advantage for Trump of entrenching a new form of secret police and of turning federal agents into instruments of his authoritarianism."

As Cole noted, White House Chief of Staff Mark Meadows told Fox News anchor Maria Bartiromo on Sunday that U.S. Attorney General William Barr and Acting Homeland Security Secretary Chad Wolf are "weighing in on" similar plans for other cities, "and you'll see something rolled out this week, as we start to go in and make sure that the communities—whether it's Chicago or Portland or Milwaukee or someplace across the heartland of the country—we need to make sure their communities are safe."

Wolf made clear in a Monday appearance on Fox News that the administration will deploy federal law enforcement with or without the cooperation of local officials, saying that "I don't need invitations by the state, state mayors, or state governors, to do our job. We're going to do that, whether they like us there or not."

In a Sunday afternoon tweet about Portland and "The Radical Left Democrats, who totally control" presumptive Democratic presidential nominee Joe Biden, Trump name-checked not only Chicago but also New York and Philadelphia:

Asked by Fox News host Chris Wallace on Sunday what he is going to do about shooting deaths in New York and Chicago, the president said: "I explain it very simply by saying that they're Democrat-run cities, they are liberally run. They are stupidly run. We have forced them in Seattle to end the CHOP because, you know, we were going in that following day. You probably have heard it. We were getting ready to go in. We were all set, and when they heard that we were going they set their police force."

The Chicago Tribune reported Monday that the U.S. Department of Homeland Security (DHS) "is crafting plans to deploy about 150 federal agents" to the city this week.

In response to the administration targeting her city, Chicago Sun-Times columnist Lynn Sweet wrote Monday that "if Trump sends a Portland-style action to Chicago, it would represent a dramatic escalation between Trump and Mayor Lori Lightfoot regarding how to deal with the city's ongoing battles against gun violence and demonstrations against racial injustice and police brutality."

Sweet also framed the potential "military-style response" to Black Lives Matter protests in Chicago sparked by Minnesota police killing of George Floyd as part of the president's effort to win in November, writing that "Chicago is one of several liberal, Democratic-run cities targeted by Trump in coordination with his reelection campaign to reinforce his message that he is for 'law and order' while framing rival Joe Biden as soft on crime and anti-police."

Portland Mayor @tedwheeler says Trump sending troops to local cities is a strategy to "use federal troops to bolste… https://t.co/2z8EN8qphY
— The Recount (@The Recount) 1595024484

Though both local and state officials in Oregon have warned that the federal presence in Portland is making the situation worse not better, the Washington Post's Greg Sargent and Paul Waldman argued last week that there "is reason to believe that this is exactly what the Trump administration wants." They wrote:

We know Trump wants these scenes to be playing out on people's televisions in faraway states, such as—to select a few at random—Wisconsin, Michigan, Pennsylvania, Arizona, and Florida.

And given that his homeland security chief is actively ignoring local officials' demands that he pull out federal law enforcement—in a manner that those officials say is inflaming the situation—it's reasonable to surmise that escalation is the whole point of these exercises in the first place.

Since video footage from Portland started circulating last week, the administration has faced condemnation from politicians at all levels, civil liberties advocates, and journalists. The crackdown also elicited separate lawsuits from the ACLU and Oregon Attorney General Ellen Rosenblum, who is suing DHS, the U.S. Marshals Service, the U.S. Customs and Border Protection, the Federal Protection Service, and their agents for violating "the civil rights of Oregonians."

The conduct of federal agents in Oregon's largest city and concerns that it will be replicated elsewhere in the country have provoked a promise from Sen. Jeff Merkley (D-Ore.) to soon introduce an amendment to military spending legislation that would block the Trump administration from deploying U.S. law enforcement to other cities as well as alarm about what happens if Trump gets four more years in the White House.

"Portland may be a dumbshow for dummies, but it also looks like a dress rehearsal," Esquire columnist Charles Pierce warned last week. "This is not an 'authoritarian impulse.' This is authoritarian government—straight, no chaser. And this administration has a powerful thirst for it. It will do anything if it thinks it can get away with it in order to benefit a president* who wants to bring the Republic down on his head."

Christopher David, a 53-year-old disabled Navy veteran whose encounter with federal police in Portland went viral over the weekend, told The Independent that Trump "is trying to see how far he can push it in Portland and create some kind of model for other cities so he can stir up enough chaos and discontent to try and win the election again. All of this is just doubling down on his strategy of division and chaos."

Noting David's comments, Common Dreams columnist Michael Winship wrote Monday that "even worse, it conceivably could be connected to a greater scheme designed to steal the November election. He pointed to "a terrific new piece" by Andy Kroll in Rolling Stone headlined, "The Plot Against America: The GOP's Plan to Suppress the Vote and Sabotage the Election."

"We need to wise up and prepare for the onslaught," Winship argued. "Trump just refused to tell Chris Wallace of Fox News whether or not he'll accept the election results. Donald Trump is a menace who if he sees he's losing bigtime—and he does—won't hesitate to repress the vote count so that he can declare a second term and because, in his words, 'I've been very unfairly treated.' Donald Trump puts the petty in petty tyrant but he's a tyrant, nonetheless. Be very afraid."