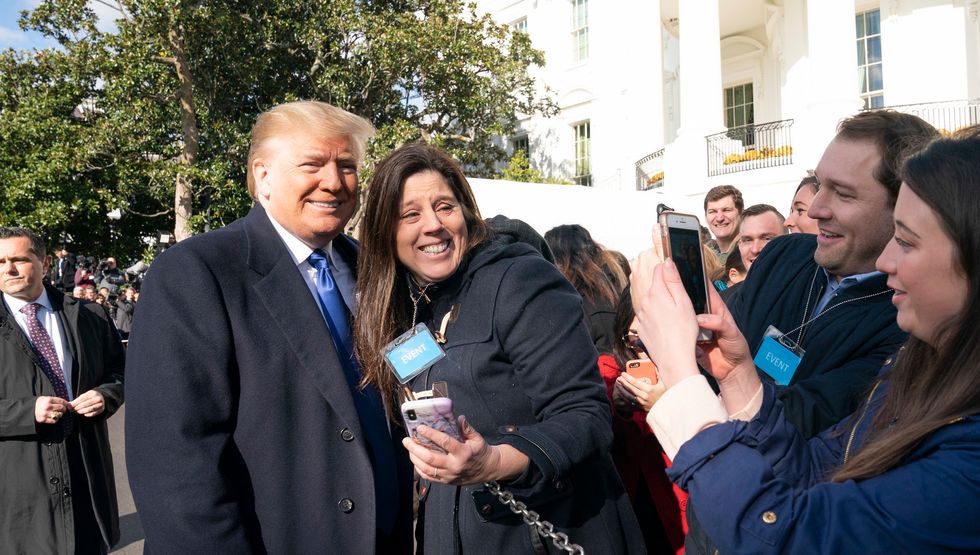 President Donald J. Trump shakes hands and poses for photos with guests gathered to watch his departure Friday, Nov. 8, 2019, on the South Lawn of the White House, prior to boarding Marine One to begin his trip to Atlanta, Ga. (Official White House Photo by Joyce N. Boghosian)
Cody Fenwick
July 23, 2020 Trump

Almost nothing President Donald Trump ever does is subtle. When he tries to appeal to specific voting demographics, he often lacks the finesse to communicate the essential idea that he doesn't just care about them for their votes — he actually shares their values.

That's why he can easily espouse bigoted ideas even when trying to court specific groups of voters, such as when he told African-Americans that they are "living in hell in the inner cities" or when he told Jewish voters that supporting Democrats demonstrates "either a total lack of knowledge or great disloyalty."

So it was little surprise that, when Trump tried on Thursday to reach out to suburban women voters, he botched it:

The Suburban Housewives of America must read this article. Biden will destroy your neighborhood and your American D… https://t.co/ufn2RFsvJU
— Donald J. Trump (@Donald J. Trump) 1595530000

Trump's use of the word "housewives" was notable because the article he linked to didn't actually use the word it all. It merely referred to "women" in the suburbs.

The fact that Trump seems to immediately think of housewives when he hears "suburban women" speaks to his simplistic and stereotypical understanding of the electorate. As Vox's Matt Yglesias pointed out, being a "housewife" — a woman who primarily cares for a family and doesn't work outside of the home — is not the experience of even the majority of mothers:

There is, of course, a reason Trump and his defenders are focused on this demographic. Extensive polling shows that Trump's support among women in the suburbs has cratered and created a massive vulnerability in the 2020 election for him. The Daily Beast recently reported:

President Donald Trump has been warned by his political advisers in recent weeks that his perilously low standing with suburban female voters could be worsening amid the lingering coronavirus crisis, imperiling his chances for re-election.

Five sources on the Trump campaign or in the administration told The Daily Beast that they fear the global pandemic and resulting U.S. economic downturn are potentially feeding frustration with the president among this demographic, which the campaign’s own polling sees as crucial in 2020. Two of the sources said the issue of suburban women has been raised in direct conversations with Trump in the past four weeks.

In the average of all the polls, Biden's ahead by more than 15 points with suburban voters. This is a historic margin, if it holds.
The fact that Biden is doing so well in the suburbs shouldn't be a surprise. The suburbs are a bellwether vote of sorts in our current political environment. That is, the suburban vote mirrors the national vote closer than the urban or rural vote.
Biden's lead in the suburbs is reflective of him doing significantly better than Hillary Clinton. Four years ago at this time, Trump was beating Clinton by a 45% to 35% margin in the ABC/Washington Post poll among suburban voters.
In other words, we're looking at nearly a 20-point improvement for Biden versus where Clinton was at this point in the 2016 campaign.

Winning this group back to Trump's side, though, will probably take a lot more than hamfisted tweets urging them to read articles based on outdated stereotypes. He'll need to show he can actually govern the country effectively and begin the work fighting the pandemic and recession that would actually improve the living standards for the majority of Americans.