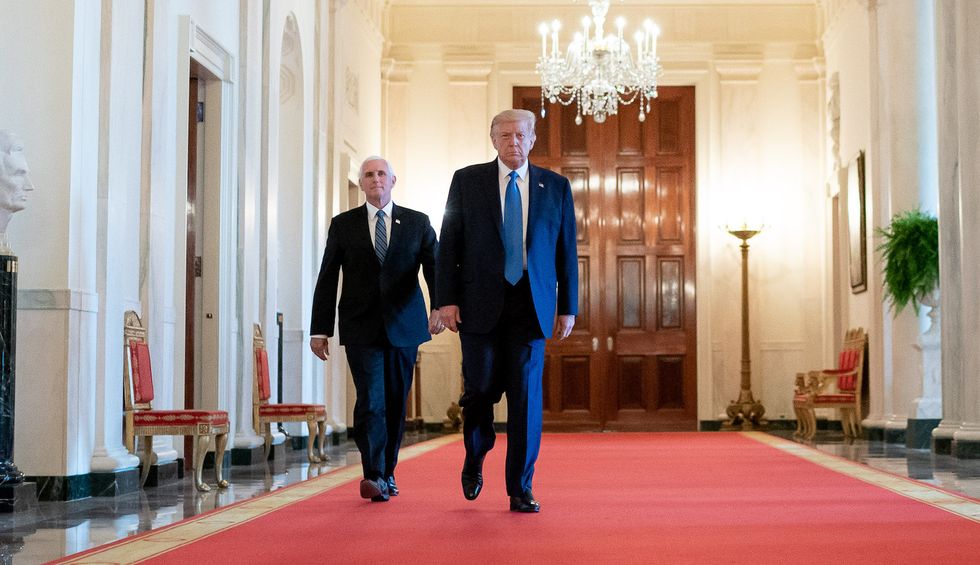 The presidency of Donald John Trump is collapsing. Unwilling or unable to confront the deadly realities of the COVID-19 pandemic, which has claimed more than 138,000 American lives, the president’s job-approval ratings have plummeted. The ravages of the virus, in turn, have triggered a deep economic slump, pushing unemployment rates to levels not seen since the Great Depression of the 1930s. There is a growing perception that our 45th commander in chief, never known for his intellectual acuity or moral rectitude, is unfit to lead the nation in this moment of extreme crisis.

Even the Supreme Court, with two of his own appointees on the bench, has seemingly turned against him. On the last day of its just-completed 2019-2020 term, the court released a pair of landmark decisions on presidential power, rejecting Trump’s desperate attempt to quash subpoenas issued by Congress and Manhattan District Attorney Cyrus Vance for his tax returns and personal financial records. Writing for a 7-2 majority in both cases, Chief Justice John Roberts rebuffed Trump’s claims of sweeping presidential immunity and reaffirmed the bedrock principle that no one—including the president—is above the law.

According to many polls, if the election were held today, Trump would lose in a classic landslide. If the pundits are correct, the entire Republican Party could be dragged down with him.

Trump’s abiding corruption and incompetence have prompted urgent calls for his resignation by newspaper editorial boards, columnists and activists like Ralph Nader. Even before his stunning setbacks in the Supreme Court, there was considerable and widespread speculation that rather than face humiliation in November, Trump will step down in the fashion of Richard Nixon, or announce à la Lyndon Johnson that he won’t seek reelection after all.

As the veteran commentator Robert Kuttner mused in a recent article in the American Prospect:

“If Trump senses a blowout defeat well beyond the usual Republican margin of theft, [he] may decide that it’s more dignified to retire undefeated. He can claim that the election was rigged, that he would have won, blah blah blah, and he can have the satisfaction of agitating his base as president-in-exile with no responsibility whatever for the consequences.”

Regrettably, I have to demur. Trump will never voluntarily stand aside. Trump will lie, cheat and steal to retain the presidency by any means necessary, and he’ll do so for one simple reason—once he is out of office, he could be prosecuted for a trove of federal and state felonies, and, if convicted, sent to prison.

If he loses the election, Trump could be targeted by a new Democratic attorney general determined to hold him accountable for a laundry list of possible federal offenses, including:

A particularly aggressive attorney general could also charge Trump with involuntary manslaughter for contributing to the staggering COVID-19 death toll. Former federal prosecutor Glenn Kirschner, now a legal analyst with NBC and MSNBC, made the case for involuntary manslaughter in an April interview with journalist Mehdi Hasan on the Intercept’s “Deconstructed” podcast.

“There are three things, what we call elements… that we have to prove in order to hold somebody accountable for involuntary manslaughter,” Kirschner explained. “One, that a person acted in a grossly negligent way or importantly for our purposes, failed to act and that failure was a product of gross negligence… Number two, their conduct was reasonably likely to involve serious bodily injury or death to another as a product of that grossly negligent act or failure to act. And three, that they thereby caused the death of another.” Kirschner argued that Trump’s record on COVID-19 satisfies all three elements for criminal liability.

At the state level, in the aftermath of his resounding loss in the Supreme Court, Trump faces a more immediate and practical threat of prosecution in New York, where District Attorney Vance has pledged to “follow the law and the facts, wherever they may lead.” Vance has resumed a grand jury probe to determine if the Daniels and McDougal payoffs, or any other aspect of Trump’s financial dealings, violated state fraud and tax laws. Federal District Court Judge Victor Marrero, who sits in Manhattan, has set an expedited briefing schedule to hear any remaining arguments from Trump’s attorneys to limit the scope of the financial-records subpoena that Vance originally issued to Trump’s accounting firm in August 2019.

Although it’s unlikely that Vance would seek an indictment before the election, if he did, Trump would not be shielded by the Justice Department’s longstanding policy against the prosecution of sitting presidents for federal crimes. The policy, which dates back to Nixon and Watergate, does not apply to the states. For purposes of charging criminal offenses, as the Supreme Court confirmed in 2019, the states and the federal government are considered separate sovereign entities.

After the election, if he loses at the polls, Trump would also lose his federal protections against prosecution once a new administration takes over in January 2021. In the interim, left with precious few options to avoid his day of legal reckoning, he could swallow his pride, abruptly change course and resign, hoping that Mike Pence, as his lame-duck successor, would rescue him with a preemptive pardon, much as Gerald Ford issued to Nixon.

But the federal pardon power does not extend to state prosecutions, and a dispensation of mercy from Pence would do nothing to relieve Trump of continuing jeopardy in New York.

Alternatively, Trump could choose to serve out the remainder of his term and pursue a strategy of delay to prolong any criminal investigations of his conduct until after the applicable statutes of limitations for his alleged crimes have expired. Under both federal and New York law, most felony prosecutions must commence within five years of the commission of an offense.

And then there is a final Trumpian option that no one should discount: In an ultimate act of destruction aimed at saving his own skin, Trump could simply refuse to leave the White House, claiming that the election results are fraudulent.

As Michael Cohen warned in his February 2019 testimony before Congress, “[G]iven my experience working for Mr. Trump, I fear that if he loses the election in 2020 that there will never be a peaceful transition of power.” Several mainstream observers have voiced similar concerns.

As ridiculous as it may seem to picture Trump clinging to the “Resolute Desk” in the Oval Office as federal marshals come to remove him, just remember how ridiculous his presidential campaign appeared when he descended the escalator at Trump Tower to announce his candidacy in June 2015.

In the Age of Trump, no depravities are beyond the realm of possibility. We need to be prepared for anything and everything.