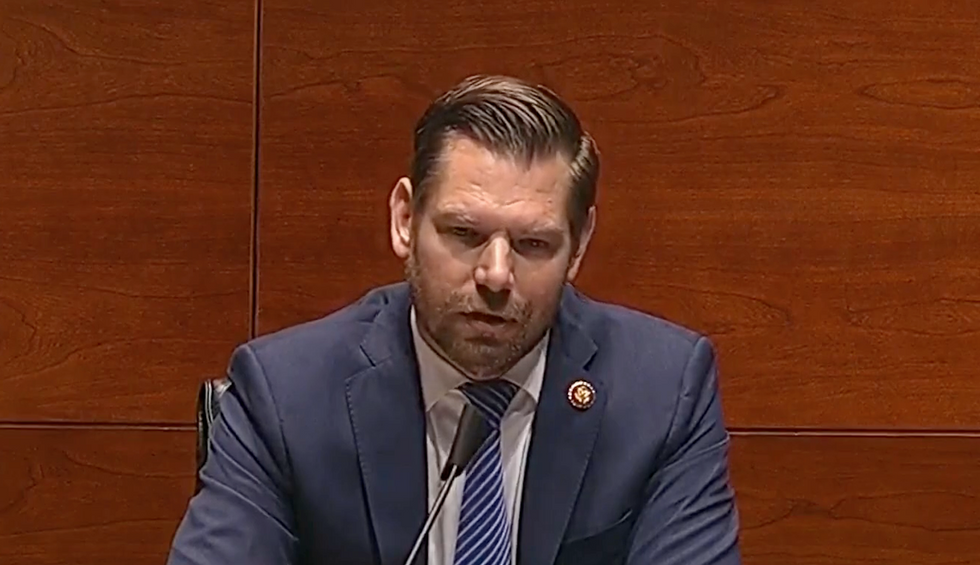 While much of Tuesday's House Judiciary Committee Hearing with Attorney General Bill Barr was wasted with imprecise and circuitous questions that let him filibuster and avoid accountability, Rep. Eric Swalwell (D-CA) managed to use his brief time to zero in on a key issue. He exposed Barr's excessive fealty and deference to President Donald Trump and effectively debunked the attorney general's claims to be an impartial defender of the rule of law.

Swalwell began by addressing an issue that had been discussed previously in the hearing without much clarity: Barr's interference in the sentencing recommendation of Roger Stone.

"Mr. Barr, have you ever intervened, other than to help the president's friend get a reduced prison sentence, in any other case where a prosecutor had filed a sentencing recommendation with the court?" he asked.

"Mr. Barr, Americans from both parties are concerned that, in Donald Trump's America, there's two systems of justice: one for Mr. Trump and his cronies, and another for the rest of us. But that can only happen if you enable it," Swalwell said, as Barr scoffed. "At your confirmation hearing, you were asked: Do you believe that a president could lawfully issue a pardon in exchange for the recipients' promise not to discriminate him? You said no, that would be a crime."

"And when you said that, that a president swapping a pardon to silence a witness would be a crime, you were promising the American people that if you saw that, you would do something about it. Is that right?" asked Swalwell.

"Now, Mr. Barr, are you investigating Donald Trump for commuting the prison sentence of his long time friend and political adviser Roger Stone?"

Barr's answer was quick: "No."

This, in itself, was a huge tell. When former FBI Director James Comey was asked by Congress if he was investigating Trump in 2017, he refused to answer — even though he wasn't. He did this for a good reason. It is unfair to confirm that any person is under investigation before charges are announced, except in extenuating circumstances. So officials shouldn't deny the existence of a particular investigation into an individual and should always refuse to answer, so that if there ever is such an investigation, the official can credibly keep it secret. But this isn't a concern for Barr in this case because Barr knows he'll never investigate the president — no matter what.

Swalwell didn't mention this fact, but he laid out a compelling case that not only should Trump be investigated for the Stone commutation, but that he is likely guilty.

"Mr. Stone was convicted on seven counts of lying in the Russia investigation. He bragged that he lied to 'save Trump's butt.' But why would he lie? Your prosecutors, Mr. Barr, told a jury that Stone lied because the truth looked bad for Donald Trump. And what truth is that?" said Swalwell. "Well, Donald Trump denied in written answers to the Russia investigators that he talked to Roger Stone during the time Roger Stone was in contact with agents of Russia influence operation. There's evidence that Trump and Stone did indeed talk during that time. You would agree that it's a federal crime to lie under oath — is that right?"

"It's a crime for you, it's crime for me, and it's certainly a crime for the president of the United States," said Swalwell. "Is that right?"

"So if Donald Trump lied to the Mueller investigators, which you agree would be a crime, then Roger Stone was in a position to expose Donald Trump's lies. Are you familiar with a Dec. 3, 2018 tweet where Donald Trump said Roger Stone had shown 'guts' by not testifying against him?" asked Swalwell.

Barr said he didn't know the quote and doesn't read the president's tweets, and Swalwell told him he would find a lot of "evidence" there. Unfortunately, this was a missed opportunity for Swalwell. He could have pointed out that the Mueller Report — which Barr supposedly read thoroughly enough to conclude Trump committed no crimes — pointed to exactly this tweet as evidence of the president's potential crimes:

On November 28, 2018, eight days after the President submitted his written answers to the Special Counsel, the President criticized “flipping” and said that Stone was “very brave” for not cooperating with prosecutors. Five days later, on December 3, 2018, the President applauded Stone for having the “guts” not to testify against him. These statements, as well as those complimenting Stone and Manafort while disparaging Michael Cohen once Cohen chose to cooperate, support the inference that the President intended to communicate a message that witnesses could be rewarded for refusing to provide testimony adverse to the President and disparaged if they chose to cooperate.

Swalwell went on to note that "on July 10 of this year, Stone told a reporter: 'I had 29 or 30 conversations with Trump during the campaign period. Trump knows I was under enormous pressure to turn on him. It would have eased my situation considerably. But I didn't. The prosecutors wanted me to play Judas. I refused.' Are you familiar with that Stone statement?"

"So how can you tell us, 'Why should I investigate the president of the United States?' When you're not even aware of the facts concerning the president using the pardon or commutation power to swap the silence of a witness?"

"Because we require a reliable predicate before we open a criminal investigation," Barr said.

Of course, there was a criminal investigation of this matter — the Mueller investigation, which had its own predicate. Now there's just more proof of Trump's corruption and potentially criminal abuse of power. Barr's never explained his reasoning for why he declined to conclude Trump committed a crime, and he made clear in his testimony on Tuesday that he's not even well-acquainted with some of the key evidence in question. The truth is, as I've argued, Barr is already committed to not investigating Trump, regardless of the evidence.