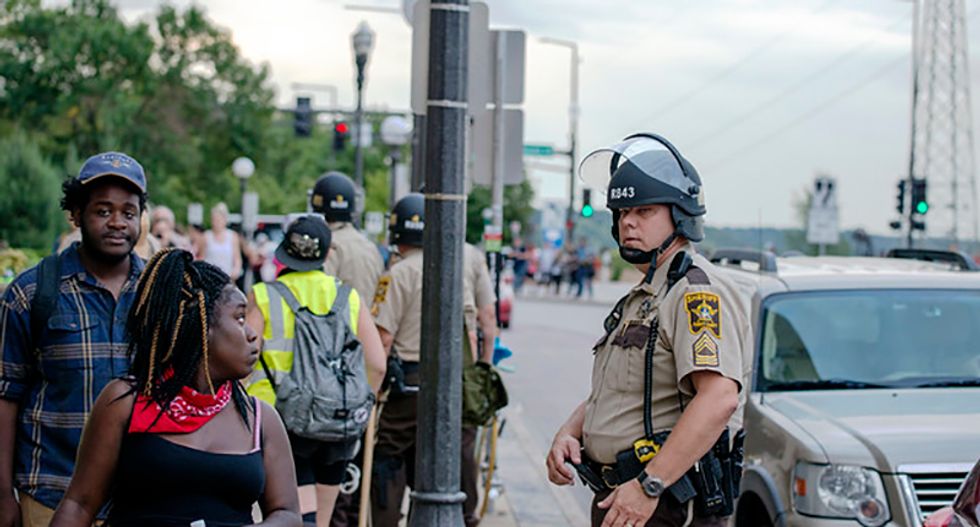 The images coming out of Portland, Oregon in recent days have been disturbing: federal law enforcement agents, wearing military fatigues and driving unmarked vehicles, have detained nonviolent George Floyd protesters — and Sen. Ron Wyden of Oregon has described the agents as President Donald “Trump’s secret police.” Much of the criticism of the agents has come from liberal and progressive website, but some conservative outlets are troubled as well, including The Bulwark. And in an article published in The Bulwark on July 20, Carrie Cordero — an intel/security specialist and former attorney for the U.S. Department of Justice — explains why having a “purely domestic security service” in the United States is a terrible idea.

“This past week, (Department of Homeland Security) personnel, including officers of the Customs and Border Patrol (CBP), were deployed by the acting secretary of Homeland Security to conduct domestic law enforcement activities in Portland,” Cordero notes. “But policing protest activity, in particular, requires a special sensitivity to and protection of constitutional rights. And the reports out of Portland indicate that DHS has provided an uncontrolled and over-militarized response. Moreover, these assignments of federal officers to control domestic unrest may be part of a broader slide toward a federal domestic security expansion that has neither been announced nor vetted either by the citizenry, the Congress, or the courts.”

Cordero, now a legal/security analyst for CNN and an adjunct law professor at Georgetown University in Washington, D.C., goes on to explain that in May, she offered a report “arguing that DHS requires immediate congressional attention to improve its internal oversight and accountability mechanisms…. The extent to which DHS is becoming almost a rogue arm of federal law enforcement should not surprise anyone who has followed the department for the last four years.”

A peaceful protester in Portland was shot in the head by one of Donald Trump’s secret police. Now Trump and Chad Wo… https://t.co/KZkDRgDOaW
— Ron Wyden (@Ron Wyden) 1594933111

Cordero’s concerns, she writes, include agents for the Drug Enforcement Agency “conducting physical surveillance without identifying themselves, using technical surveillance techniques over crowds of individuals without suspicion of wrongdoing, and otherwise collecting intelligence — covertly — on individuals purposefully exercising their First Amendment rights. And this sort of clandestine activity clearly crosses the line into domestic security activities.”

The former DOJ attorney adds, “Most law enforcement activities do not require covert activity. And when undercover activities are needed, they are performed according to strict rules and procedures and approvals. These approvals are given on a case-by-case basis. In the normal course of events, law enforcement activity is conducted openly: agents identify themselves when they conduct interviews, execute searches, or make arrests. Why should law enforcement need to use covert means to protect public safety in the context of public protests?”

Cordero concludes her article by stressing that federal law enforcement must operate out in the open and that there should be no place for secret police in the U.S.