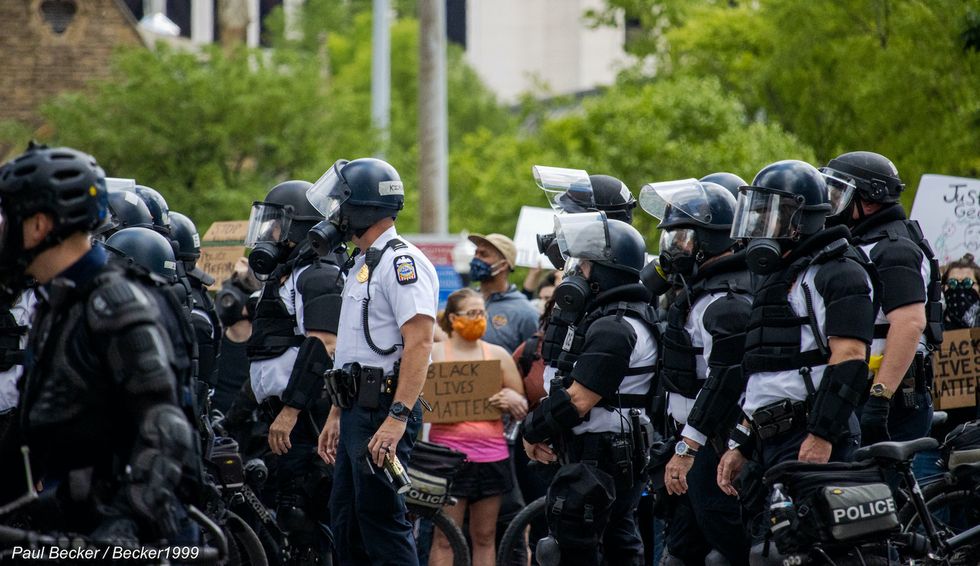 That finding was recently confirmed and expanded by Edward Lawson Jr. at the University of South Carolina.

This federal effort is called the “1033 Program.” It’s named after the section of the 1997 National Defense Authorization Act that allows the U.S. Defense Department to give police agencies around the country equipment, including weapons and ammunition, that the military no longer needs.

Much of the equipment is brand new and some is innocuous – like file cabinets and fax machines. But the program has also equipped local police with armored vehicles and helicopters, as well as weapons meant to be used against people, like bayonets, automatic rifles and grenade launchers used to deploy tear gas.

The seeds of this program came in 1988 as the Cold War was ending. The military was shrinking, while police were feeling overwhelmed fighting the drug war. A provision in the National Defense Authorization Act allowed military surplus to be distributed to state and federal agencies combating drugs. In 1997, the program was expanded to include all law enforcement agencies – including school districts. That additional eligibility led to a dramatic expansion in the program, and over the past 23 years police all across America received billions of dollars in military-grade hardware often designed specifically to fight in the battlefields of Afghanistan and Iraq.

And yet, all that equipment has done more harm than good. Militarization of police doesn’t reduce crime or improve officer safety – but it does make civilians less trusting of the police, with good reason.

In our study, my coauthors and I found that the police agencies who received the most military gear had, in the year after getting the equipment, a rate of civilian killings more than double that of police departments that had received the least amount of military equipment through the 1033 Program. While data limitations limited our analysis to four states, our findings were replicated with nationwide data.

On a wartime footing

Federal records of how much military gear has actually been given to local police are inconsistent, poorly maintained and sometimes missing altogether. But between 2006 and 2014, the available records reveal that more than US$1.4 billion worth of equipment was distributed. While the 1033 Program is the most significant source of military gear for police in general, it is not the only source of military equipment for police: There are other similar federal and state grant programs, and many big-city police departments have massive equipment budgets of their own with which they can purchase military-grade hardware.

The 1033 Program often requires receiving agencies to use the equipment within the first year after getting it, according to research done by the American Civil Liberties Union, even if a situation may not truly need it. That requirement exists alongside the proliferation of heavily armed SWAT teams and other military-style units in U.S. police departments, officers’ veneration of the revenge-killing comic-book character “The Punisher” and adoption of its logo, as well as militaristic training programs such as “killology.”

Together, research has shown, those influences lead police to emphasize the use of force to solve problems they encounter in the community. The equipment comes at no cost to the departments, but they have to pay to maintain it, which can be very expensive. To justify the costs, and help defray them, police often use the gear to serve search warrants targeting drug crimes. That can make the departments eligible for additional federal grants – and for a share of the value of any property and money seized during drug raids.

As a result, supposedly free weapons and vehicles can lead some police to use aggressive deployment strategies that make civilian casualties more likely. Other departments may already have a military-style mindset and are taking advantage of an opportunity to stockpile more equipment.

While police often claim that militarized gear is a necessity in order to prepare for “worst-case scenarios,” there is ample evidence that receiving agencies use military gear in inappropriate situations. While the killing of Black EMT Breonna Taylor in her home in March grabbed headlines, she is but one of many civilianskilled by policeunderquestionablecircumstancesduring no-knock raids, when police force entry into a building or home without announcing themselves.

For obvious reasons, such raids carry an unreasonably high probability of death in a country with more guns than people. These and other overaggressive deployments are the direct result of public policy that gives militarized gear to local police, with little training or oversight.

In our research, we don’t make any determination of whether specific killings by police were justified or not. In our view, too often the question of legal justification takes a very narrow look at the few seconds just prior to a lethal interaction. We believe that a wider perspective is useful: Local, state and federal rules and training influence the behavior of police agencies across the country. When policing strategies are overly aggressive, an increase in civilian casualties tends to follow. While the resulting killings are often called “justified,” they’re more often the avoidable result of policy decisions made well before the incident in question.