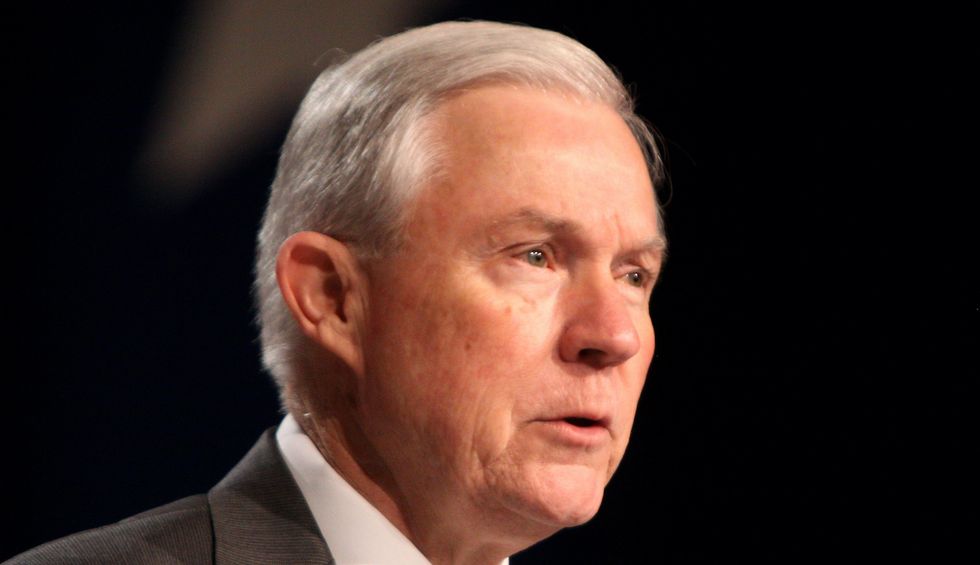 Former Attorney General Jeff Sessions lost his primary race to be the Republican candidate for U.S. Senate in Alabama on Tuesday night in a landslide, according to Decision Desk HQ. Early returns showed him losing the shot to win back his old seat by more than 20 points to opponent Tommy Tuberville, who will face off against Democratic Sen. Doug Jones in November.

It wasn't a surprising loss for Sessions, though it is a brutal one. He gave up his seat in the Senate to become President Donald Trump's attorney general, and he lost his big chance to return because his one-time benefactor turned against him. Trump enthusiastically endorsed Tuberville while viciously and repeatedly denouncing Sessions.

There's no reason to feel any sympathy for Sessions. He's an unrepentant racist who loved Trump's anti-immigrant bigotry so much that he was the first sitting senator to endorse him as a presidential candidate. He was one of the leading architects of the family separation policy that tore apart immigrant children from their parents, inflicted untold suffering, and created enduring trauma.

But his national humiliation should be a warning to the rest of us. Like it or not, Trump is in all likelihood to remain president until at least January of 2021. And his treatment of Sessions could presage his treatment of the country — especially if he loses re-election to former Vice President Joe Biden.

Sessions genuinely did love Trump. He loved Trump enough to endorse him early in the race when many still thought he was destined for defeat. Had Trump gone down in flames, Sessions would have been seen as an easy mark.

He took the risk, though, because Sessions really believed in Trump. He believed in the anti-immigrant message, the barely concealed racial animus. He wanted to help Trump enact that vision, to turn it into law.

Yet despite his commitment to Trump, he had his limits. When early in Trump's presidency, the Russia investigation began to come into view, Sessions did nothing to stop it. Worse than that, in Trump's eyes, he recused himself from the case as the ethics regulations dictated he must. He refused repeatedly to intervene in the investigation despite Trump's pleas. Trump never forgave him for this, seeing it is a fundamental betrayal, even though Sessions was only following the law and his conscience on this matter — one of few saving graces in an otherwise loathsome career. Trump eventually fired him in what can only be described as an act of obstruction of justice and retaliation.

Sessions was thoroughly humiliated, and he only humiliated himself further when he ran for his old Senate seat. Despite Trump's constant abuse, he pledged to serve the president's will in the Senate. The Republican voters, it seemed, didn't buy it. They took Trump's word on what was good for Trump over Sessions' protestations.

So for a second time, Trump has degraded and humiliated Sessions, a man who from all appearances genuinely loved him and wanted to serve his ends. And this time, it wasn't about wresting control of a vexing investigation; it certainly wasn't about policy differences. Sessions probably would have been a loyal ally in the Senate if he had the chance to be around for a second Trump term. Trump sabotaged Sessions because he felt Sessions was insufficiently loyal when he needed it. It was an act of vindictiveness and spite. It was also, intentionally or not, a warning to anyone else who isn't loyal.

Which brings us back to the November election. Currently, Trump is strongly favored to lose. He may pull off a stunning upset and scrape by with an electoral college victory once again, but right now, it's a longshot. Most likely, Biden will be the next American president.

So what happens if Trump loses? There's been a lot of discussion about how Trump might try to contest the result or throw the election into doubt. Those are real possibilities that we need to be deeply concerned with.

But those efforts may fail, or the loss may be decisive enough that Trump doesn't even try to deny it. What then? That's when we might realize just how bad it is having a president who revels in spite and retaliation. A man with the power of the presidency, and all that that entails, will hold his office for another two and a half months after losing. He'll feel betrayed by the American people, and he'll no longer have much incentive to keep us in his good graces. We should be thinking hard about how he could be constrained in that time and what he might try to do to exact his revenge.