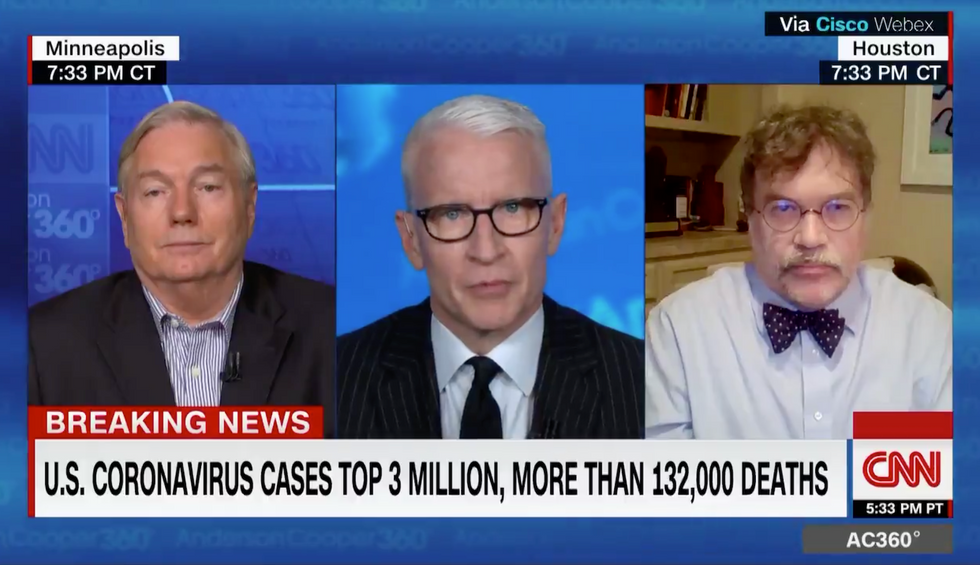 In the spring, Americans were hoping that COVID-19 infection rates would decrease during the summer months; instead, infection rates have been surging in many states — and health officials in Sun Belt states such as Florida, Arizona and Texas fear that their hospitals could become overwhelmed. Infectious disease expert Michael Osterholm, who serves as director of the Center for Infectious Disease Research and Policy at the University of Minnesota, discussed the gravity of the situation when CNN’s Anderson Cooper interviewed him on Wednesday night and predicted that infection rates in the U.S. will continue to increase.

Before bringing Osterholm on, CNN noted that on Tuesday alone, 1,000 new COVID-19 infections were reported in Houston. And the positivity rate for coronavirus tests hit 28% this week in Miami-Dade County — where the number of patients requiring ventilators increased by 100%, according to CNN.

When Cooper asked Osterholm what he expects to see in the weeks ahead, he responded, “The number is only going to continue to rise. Many of these cases are already in the pipeline. Just as we sat here a month ago and talked about 20,000 cases — and 40,000 seemed like it could never happen — then, suddenly, now, we’re talking 60,000. As we also talked about, 100,000 cases a day are not out of the question. This is just going to continue to spread.”

Cooper asked Osterholm how the infection rates might “start to go down” and if there is “something to pin some hope on.” And the infectious disease expert gave a blunt response, saying, “No one wants to use the word lockdown…. But the bottom line is: we’re going to really clamp back down again. The countries that have successfully contained this virus were able to get it down to a level of one two cases per 100,000 population — then, testing and contact tracing will work. In a situation like this, when the entire force is on fire, all the testing and contact tracing in the world is not going to shut it down. It’s going to take a lot of distancing issues. And we’re back to square zero, in a sense.”