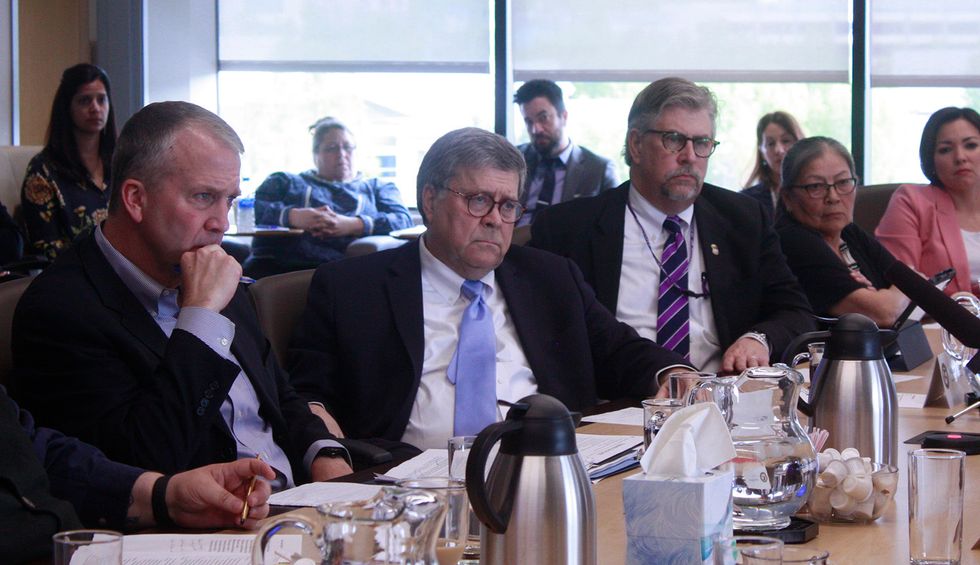 When Attorney General Bill Barr tried to force out Geoffrey Berman, who had been the U.S. attorney for the Southern District of New York, he created a mess he clearly didn't foresee. He claimed Berman had stepped down, but Berman quickly refuted that claim. Berman's opposition foiled Barr's attempt to replace him with an outsider to the office, and eventually, Berman left on the understanding that his deputy, Audrey Strauss, would take over.

The tumultuous and dramatic series of events left a question that has yet to be answered: Why did Barr want to replace Berman so badly? Given the SDNY's centrality to several cases that directly or indirectly implicate President Donald Trump, the hamfisted effort to oust Berman has raised suspicions of potential misconduct and improper influence.

Under this cloud, the House Judiciary Committee interviewed Berman in a closed session. A transcript of the interview was released Monday evening. Though it doesn't definitively answer the question of what Barr was trying to do, these seven details only raise more suspicions about the propriety of his actions:

1. Berman asked a series of unanswered and troubling questions about Barr's decision to fire him.

The Attorney General praised me privately and publicly. Why then did he insist on me resigning during Clayton's confirmation process? Why did the Attorney General say that I was stepping down when he knew I had neither resigned nor been fired?

Why did the Attorney General not tell me the actual reason he was asking me to resign instead of saying that it was to get Clayton into the position? And why did he announce the appointment of Craig Carpenito as acting U.S. attorney when Audrey Strauss was the logical and normal successor?

2. Berman says, had Barr gotten away with it, investigations would have been interfered with.

I believe the Attorney General was trying to entice me to resign so that an outsider could be put into the acting U.S. attorney position at the Southern District of New York, which would have resulted in the delay and disruption of ongoing

He repeated this point:

And let me just say that the appointment of Craig Carpenito or anyone from outside of the Southern District of New York as an acting U.S. attorney and bypassing Audrey Strauss, the universally respected deputy of the United States Attorney's Office, was something that would cause a disruption and delay in our investigations.

I'm not questioning Carpenito's honesty or integrity, but all of these events were irregular and unexplained and raised serious concerns for me. Firing me and then bypassing my deputy Audrey Strauss to place Carpenito in charge of the office would have caused significant disruption and delay in the investigations the office was handling.

3. Berman refused to exonerate Barr or speculate on his motives.

Q: You don't have any concerns -- you hadn't testified about any concerns you have about the Attorney General's integrity, correct?

Berman: I don't know what the Attorney General's motives were.

Q: Do you have any concerns about his integrity?

Berman: I don't know what the Attorney General's motives were.

Q: But you have not testified -- you have not provided any testimony here today that signals you have concerns about the Attorney General's honesty or integrity or fitness to serve, fitness to make decisions that he's empowered to make under the statutes, correct?

Berman: I do not know what the Attorney General's motives were.

4. Berman said he didn't want someone from outside taking over the office for the "near future."

This was one of Berman's most suggestive comments. It seems to indicate he believed certain sensitive investigatory steps were going to be taken shortly by SDNY.

My primary concern in that meeting was not so much the Clayton nomination and confirmation process. That was going to take a long time. My primary concern was not to have an acting U.S. attorney from outside the office placed in that position in the near future.

5. If Barr had gotten his way, it would have been the first change of its kind in 70 years, Berman said.

In addition, putting in Carpenito from the outside was completely unnecessary. The office's deputy, Audrey Strauss, has a sterling reputation and knows the investigations and cases and would be the logical and normal choice for acting U.S. attorney.

And, finally, putting someone like Craig Carpenito in as acting was unexplained. When I questioned the Attorney General why I was being asked to resign before Clayton was confirmed, he said to get Clayton in the job. He never mentioned Carpenito. The AG has never given a reason for passing over Audrey Strauss.

6. Berman said that Barr tried to threaten him to resign from his post.

The Attorney General said that if I did not resign from my position I would be fired. He added that getting fired from my job would not be good for my resume or future job prospects. I told him that, while I did not want to get fired, I would not resign.

7. Berman debunked one of the less-troubling explanations for his dismissal.

In this section, Berman had to talk in circles a bit to stay within the parameters that he had agreed to. But it is crucially important. Some reports have suggested that Berman might have been forced out because he declined to sign a Justice Department letter criticizing New York Mayor Bill de Blasio. This might have been a spurious and wrongful reason to fire Berman, but it wouldn't point to any possible greater misconduct. But Berman explained that this explanation doesn't make any sense, because Barr tried to offer him what amounted to a promotion before he was fired. And that promotion would have put him in charge of such letters:

Q: On June 19th, the very same day Barr announced to the public that you would be stepping down, the Justice Department issued a letter to New York City Mayor Bill de Blasio criticizing the city's enforcement of social distancing rules. It was signed by Eric Dreiband, the head of DOJ's Civil Rights Division. Did the topic of that letter, or stay at home orders generally, come up during your discussions with Barr on June 19th?

Q: Were you ever, by Barr or anyone else, asked to sign that letter?

Berman: I decline to answer that question, because it is outside of the parameters established for the interview.

Q Sir, I'm sure you're aware of the public reports that you were asked to sign that letter and refused the very day before Barr announced that you would be stepping down. Would you tell us if those reports were untrue?

Berman: Is the premise of your question that, hypothetically, my refusal to sign that letter might have played some role in the Attorney General's decision to have me fired?

Q: Not hypothetically. Do you know whether --

Berman: I'm asking you. Please answer my question, because I could only answer this in a hypothetical way.

Q: Sure, in a hypothetical way.

Berman: Then the whole premise of your question seems -- seems problematic, because had I -- had that letter played any role in the Attorney General's thinking, why would he have offered me to be chief of the Civil Division, which oversees all such letters?