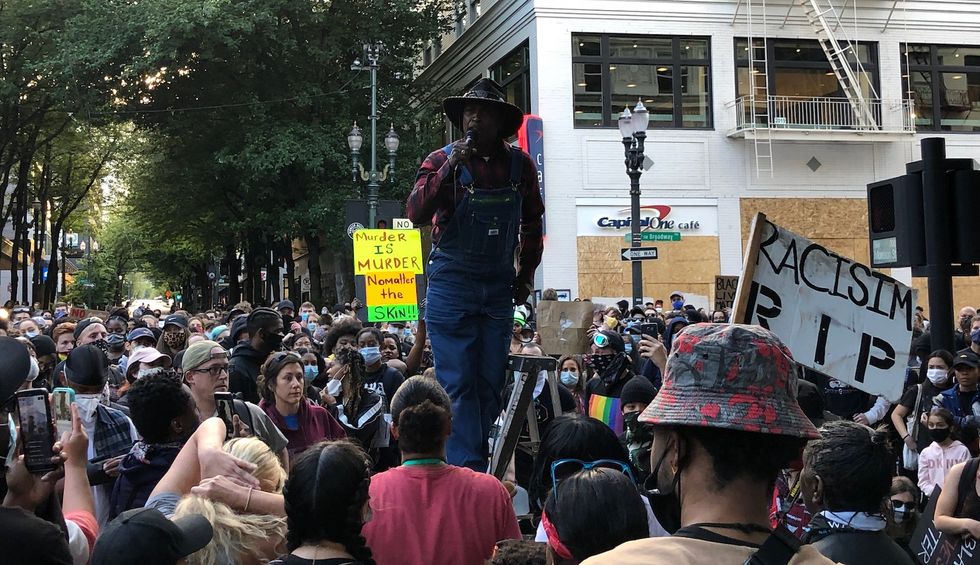 President Donald Trump gave Democrats yet another reason to oppose his reelection when he bragged about using federal law enforcement officers against George Floyd protesters in Portland, Oregon and threatened to do the same thing in Chicago and other major cities with Democratic mayors. But some Republicans have been speaking out as well, and liberal Washington Post columnist Greg Sargent discusses their objections in his column this week.

“Under fire for dispatching federal law enforcement into cities in defiance of local leaders, in part to create TV imagery that sends an authoritarian thrill up President Trump’s leg, top officials are offering several new defenses,” Sargent writes. “All are profoundly weak, which is why senior members of previous Republican administrations are now condemning what’s happening.”

One of those Republicans is Michael Chertoff, who served as secretary of the U.S. Department of Homeland Security under President George W. Bush. Chertoff, Sargent notes, has described Trump’s use of DHS officers as “very problematic” and “very unsettling.”

Chertoff told Sargent, “In my view, this is damaging to the (Homeland Security) Department. It undermines the credibility of the Department’s principal mission.”

Acting DHS Secretary Chad Wolf has vigorously defended Trump’s actions, arguing that DHS has a right to protect federal property such as the federal building in Portland. But Chertoff finds Wolf’s arguments unconvincing.

The former Bush-era DHS secretary told Sargent: “While it’s appropriate for DHS to protect federal property, that is not an excuse to range more widely in a city and to conduct police operations — particularly if local authorities have not requested federal assistance. That’s our constitutional system.”

Trump’s desire to send DHS officers to patrol U.S. cities whether governors and mayors want them there or not, according to Chertoff, is “very problematic legally as well as morally.”

“Essentially, he’s suggesting this is a political maneuver,” Chertoff told Sargent. “As someone who’s spent four years at the department, the idea that people would be suggesting that it’s going to be a tool of political activity is very unsettling.”

Another Bush-era Republican who is speaking out against Trump is Tom Ridge, who served two terms as governor of Pennsylvania before becoming DHS secretary under President Bush in the early 2000s. Interviewed by CNN’s Michael Smerconish, Ridge stressed that DHS was created after the 9/11 terrorist attacks to protect the U.S. against “global terrorism” and was “not established to be the president’s personal militia.”

“It would be a cold day in hell before I would consent to a unilateral, uninvited intervention into one of my cities,” Ridge told Smerconish.

Sargent wraps up his column by stressing that “acting’ is the keyword where Wolf is concerned. Unlike a permanent DHS secretary, Wolf has not been confirmed by the U.S. Senate.

“The lack of Senate confirmation is the key there,” Sargent explains. “As (writers) Nick Miroff and Matt Zapotosky point out, it’s no accident that unconfirmed officials like Wolf ‘appear almost daily on cable television to praise Trump’s resolve.’ That’s what Trump wants them to do. But the growing roar of criticism from the other direction may render this new push impossible to sustain.”