DHS employees worry that Portland will hurt agency's image. It's way too late for that 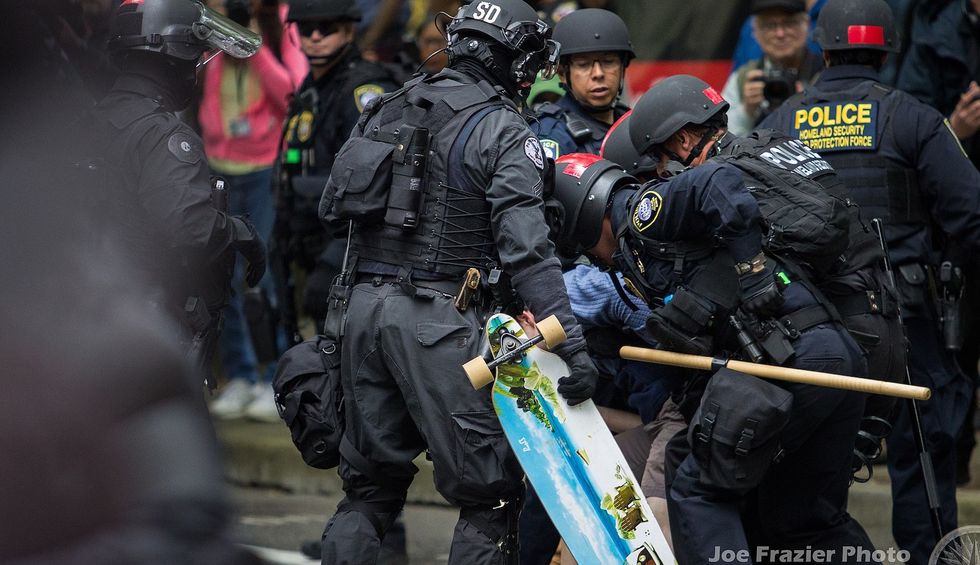 Nearly 20 anonymous Department of Homeland Security (DHS) employees tell BuzzFeed News that they’re really worried about how the use of state-sanctioned kidnappings and other violent force against protesters in Portland, Oregon, looks for them, with one saying unleashing Customs and Border Protection (CBP) agents and others on the city “absolutely hurts the reputation of the agency. Most people have no clue what we do, but now they will have this ham-fisted response in their mind as they think about CBP.”

Thanks for speaking up now, I guess. We also can’t help but notice the concerns come as agents are targeting people who aren’t migrants, because CBP has snatched mothers in front of their children before. CBP has tear-gassed other moms at the border. CBP has let migrant kids die on its watch. CBP has shot and killed an unarmed migrant, and then lied about it. If the agency is worried about reputation of all things, it should look in the mirror to see who’s to blame.

One “DHS employee said they’d never seen anything like what's happening in Portland in their many years at the agency,” BuzzFeed News reported. “’We have a lot of work ahead in terms of repairing the public’s trust,’ the employee said.” But to anyone in the public who has been steadily watching and keeping track of the department’s abuses throughout the years, there’s been no trust in the first place. Just look at other recent developments in the past several days.

Following an internal investigation of a racist and vile Facebook group where members mocked the death of a migrant boy on U.S. watch, only four of the nearly 140 agents investigated for their participation in the group were fired. Heads should have rolled like a bowling alley, but an internal document released by a House committee shows the agency actually shielded some agents from harsher punishment. Unless I missed it, there was no outcry from anonymous DHS employees on that.

There’s real fears that the state attacks in Portland could become deadly, but CBP has already been deadly. Not only did a recent Government Accountability Office (GAO) report confirm that CBP disregarded a CDC recommendation to give detained people flu shots following the deaths of children in CBP custody in late 2018, a pediatrician recently told Congress and those children’s parents that they could have been saved.

“Unfortunately, the border patrol agents at the forward operating base where Jakelin was apprehended did not conduct sufficient screening to identify her illness before the first bus left for the border patrol station,” Pediatrician Fiona Danaher wrote to the father of Jakelin Ameí Rosmery Caal Maquin. “They also did not have adequate training to recognize how sick she was, and they did not call ahead to request that an ambulance meet your bus en route to the border patrol station.” She was only seven.

Immigration and Customs Enforcement (ICE) is no different in its callousness and cruelty. As it threatens to rip more children and parents apart rather than just release them together from migrant family jails hit by COVID-19, private prison executives contracted with ICE to jail immigrants for the federal government claimed to Congress earlier this month that they had no knowledge of guards using violent force against people protesting their ongoing detention amid the pandemic.

“In reality, people at CoreCivic facilities have been pepper-sprayed on at least four occasions,” a Mother Jones report recently said. “At LaSalle, it’s happened on at least five occasions. And at GEO Group detention centers, the total is also at least five. Hundreds of immigrants and asylum seekers have been exposed to pepper spray during those uses of force.” But why should private executives be worried about lying to Congress when unconfirmed DHS Sec. Chad Wolf lied to Congress about his role in family separation and is still somehow in his job?

In second statement to BuzzFeed News about DHS presence in Portland, another anonymous employee commented that they “did not sign up nor was I trained to be a street cop,” adding that “[c]ivil societies have immigration laws that need to be enforced, but that does not mean we should be used as this delusional president’s personal attack dog just because we happen to be available.” But agents have shown themselves to disregard laws and the rights of people they detain when it’s convenient for them.

"Every yr, approximately 250 CBP employees are arrested, many on suspicion of serious felonies; dozens have been ja… https://t.co/j9PbalSqoc
— Gabe Ortíz (@Gabe Ortíz)1595431014.0

Agreed and if this sounds radical to you remember Britney Spears’ first three albums are all older than DHS 👇🏽 https://t.co/5DZo8GTkHd
— Gabe Ortíz (@Gabe Ortíz)1595389017.0

DHS has gotten away with these abuses for years, often in broad daylight. It’s long past time we say, enough. Defund ICE, defund CBP, hold agents and superiors accountable, and stop the abuses.