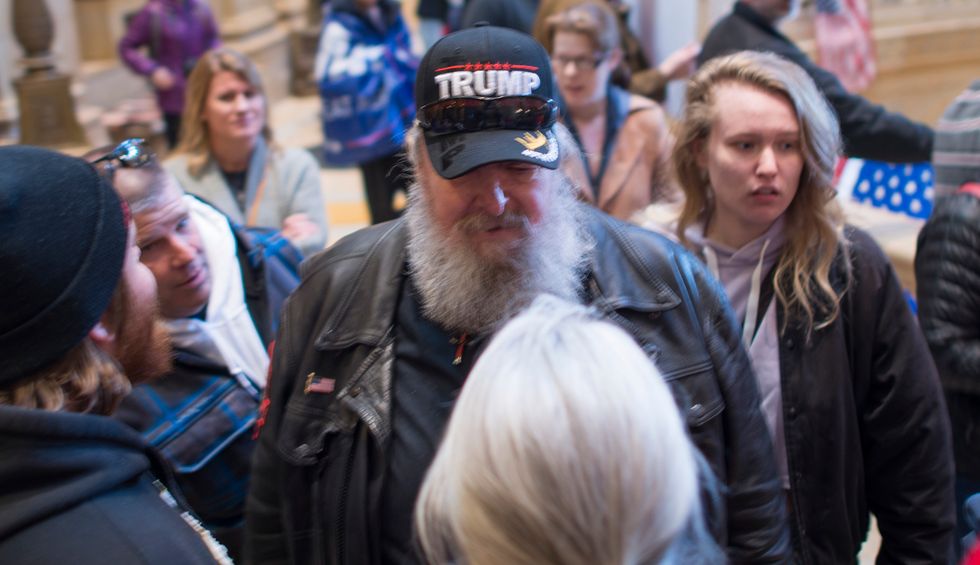 About 100 were counter-protesting against the "March 4 Trump" rally at the Minnesota capitol. About 700 people were there to show support for Republican President Donald Trump. 2017-03-04 This is licensed under the Creative Commons Attribution License. Attribution: Fibonacci Blue
Daniel Villarreal
and
The New Civil Rights Movement
July 04, 2020

In a performative gesture that does nothing to discourage police from killing Black people, the National Football League has decided to jump on the feel-good Black-ally bandwagon and play "Lift Ev'ry Voice and Sing" (aka. the Black National Anthem) at the start of every week one game when the season opens on September 10.

The song, which was written in 1900 and set to music in 1905, will reportedly play before the usual national anthem, "The Star-Spangled Banner", and will be presumably be all but forgotten by the NFL after one week.

Predictably, conservatives on social media are using the hashtag #BoycottNFL to express their displeasure:

The NFL needs fans more than we need the NFL. If they kneel during the anthem, or play anything other than the act… https://t.co/hr49N59YYC
— Brigitte Gabriel (@Brigitte Gabriel) 1593788523.0

There are an equal number of other Twitter users mocking such "fans" for turning their backs on the league at a moment's notice. But as Black writer Panama Jackson at The Root points out, the playing of "Lift Ev'ry Voice and Sing" could backfire if cameras capture scores of NFL fans turning their backs as the anthem plays. However, perhaps that would show the NFL just how widespread racism among its fandom really is, despite 70 percent of its player being Black.

Beyond the playing of the Black National Anthem, ESPN explains, the NFL has other plans to make symbolic gestures against anti-Black police violence, though none (except for the final one mentioned below) are sure things:

Having recently displayed increased awareness about the problems of systemic racism, the NFL, in collaboration with the NFL Players Association, is also considering listing the names of victims on uniforms through decals on helmets or patches on jerseys. The NFL also may produce educational programs about victims, among other plans.... [like] plans to increase its social justice footprint by pledging to donate $250 million over a 10-year period.

In other race-related NFL news, this week the NFL said it will finally conduct a "thorough study" on possibly renaming the Washington state football team whose name is an old-timey slur for Native Americans.

In early June, NFL Commissioner Roger Goodell said the NFL was wrong to ban players from protesting anti-black policing in America. However, his apology didn't name Colin Kaepernick, the former NFL player whose 2017 on-field kneeling protest compelled the NFL on May 23, 2018 to threaten fines against any players who didn't stand or stay hidden during the national anthem.

The national anthem, "The Star Spangled Banner," as Teen Vogue reminds us, was written by a slave-owning Washington lawyer, Francis Scott Key, who referred to African-Americans as “a distinct and inferior race of people."