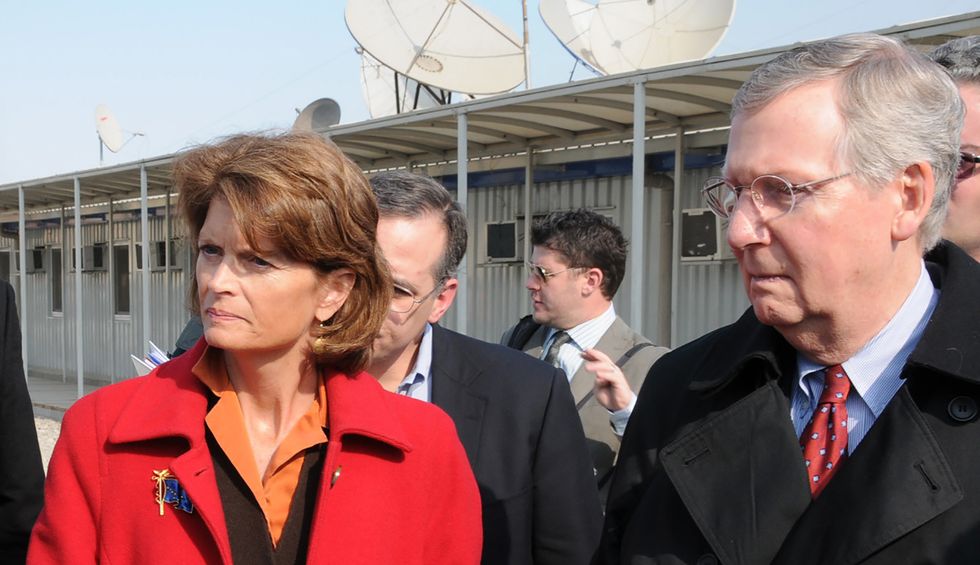 100109-N-9594C-004 – KABUL – Lt. Gen. William B. Caldwell IV, left, Commander NATO Training Mission – Afghanistan, talks with U.S. Senators Lisa Murkowski and Mitch McConnell during a tour of the Central Training Facility (CTC), Kabul, on January 9, 2010. Sens. Murkowski and McConnell were joined by Senators Roger F. Wicker and Mike Crapo and Rep. Michael Castle for a visit to CTC and other facilities in the area. The Congressional delegation received briefings from CTC, NATO Training Mission-Afghanistan (NTM-A), and International Security Assistance Force senior leadership and met with Afghan National Police officers while in the Kabul area. The mission of NTM-A is to train the Afghan National Security Forces and enhance the Government of the Islamic Republic of Afghanistan’s ability to achieve a stable and secure country (U.S. Navy photo by Chief Mass Communication Specialist F. Julian Carroll)
Joan McCarter
and
Daily Kos
July 21, 2020 The Right Wing

Senate Majority Leader Mitch McConnell has his priorities for the next coronavirus relief bill: forcing kids back to school and protecting businesses—and schools—from liability if they end up killing people by reopening prematurely. Those are his priorities. His cadre of vulnerable Republicans seeking reelection this year have more pressing worries, like the tens if not hundreds of thousands of their constituents who are still unemployed and are about to lose the lifeline of expanded unemployment insurance (UI) benefits.

"We have to—together—get through this by making sure that people are able to get back to work, that businesses are able to survive, that individuals know that they're going to be okay," endangered Republican Sen. Cory Gardner of Colorado told The Washington Post. Good luck with that when you've got Grim Reaper Mitch McConnell and Trump leading the way. The freak-out impetus for Gardner and others is Trump's move to keep coronavirus testing and tracing funds out of the next relief bill. The White House seems to have backed away from that, but the threat of whatever it is Trump's going to try to pull next—and the knowledge that voters are very scared and very angry—is putting these senators on edge.

Gardner told the Post that his constituents are demanding more federal aid and the continued unemployment benefit boost, which he also supports extending. He is, however, open to reducing that benefit, which is now $600/week. He also said that he's more than willing to listen to Democrats' demands for more state and local aid, which McConnell is refusing unless it's specifically tied to school reopening.

Sen. Susan Collins is also clamoring for more aid to her state, Maine, and for continued UI expansion. Trying to remount her "moderate" horse, Collins says that "now is not the time" to worry about how much Congress is spending to address the crisis or about that national debt. That's how worried she is about reelection—she's not even trying to play deficit peacock.

Meanwhile, their Democratic opponents are on offense. In one of Georgia's races, Democrat Jon Ossof hit hard. "David Perdue and Donald Trump have nothing to run on but widespread disease, mass unemployment, a record of being wrong and being wrong such that Americans lose their lives, millions have lost their jobs," he said. He's not wrong. "David Perdue will lose in November when his record is exposed." In Texas, MJ Hegar is finding a lot of room for hitting John Cornyn. "He said it was a mistake to expand unemployment insurance, and I'm not confident that he would support it again," Hegar said in an interview with the Post. "That's not a handout. That is our country, our capitalist economy responding to the economic crisis. So he should be thinking more about what is best for his constituents and not what Mitch McConnell tells him to say."

That's a message that's going to be working for Democrats all over the country. No one wants to be McConnell's rubber stamp any more.