'You don't belong': White man threatens black teen in front of her home in gated community 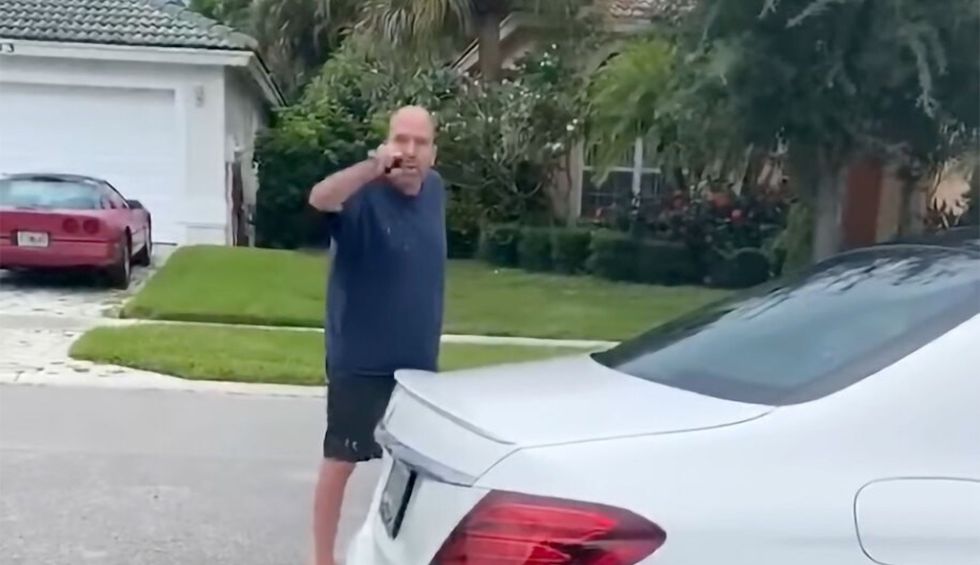 Tensions are high in the country. We are in the middle of a historic pandemic, our economy is going down the drain, our federal government is being dominated by a truly incompetent and cruel narcissist, and the racism and inequalities in our society have never been more transparent. But let’s be clear: the incidents of law enforcement, of “Karens,” and of white folks mistreating their Black neighbors are not new to this moment in time. We just have more personal recording equipment and easier ways of disseminating that information than we have ever had before.

According to the Palm Beach Post, Breonna Nelson-Hicks, 15, was riding around in a golf cart with other teenaged friends in her Wellington, Florida, neighborhood. In a police report, Nelson-Hicks said an unidentified middle-aged white man driving a Toyota sedan began following the group of teenagers. The man began very deliberately tail-gaiting the group and, according to Breonna, her group pulled over to the side in order to let the man pass. But it seems that man didn’t want to pass.

According to the report, when they stopped and the man in the car continued to just sit behind them, the boys in the group jumped out and ran while the three female teens began walking back toward Breonna’s home, where her grandfather was. Breonna is Black and her two friends are white, according to the Palm Beach Post. When the teens got close to the home the man reportedly began yelling at them, then stopped his car and got out to continue yelling at them. This is when one of the young women began recording the incident on her phone.

In the video, which you can watch below, the man menacingly tells the teens that they “don’t belong in this development,” to which the teens reply that they do, and that they live there. The man demands to know their name and where they live. “Why would I tell you any of this?” says one of the girls. The man threatens to have them arrested, and the girls say fine: “What did we even do wrong?” The man seems to walk toward a neighbor, who has come out of her driveway from across the street. He tells the neighbor that he “had to wait five minutes while they were strutting around the road.”

It is at this point in the video that the girls involved make that sound of exasperation one makes when someone is gaslighting you. They begin explaining that they were attempting to back up out of his way in order to let him pass, but he clearly wouldn’t allow that. Breonna then can be seen walking into the frame, telling the man that she could go get her grandfather now. The man is all bluster, saying “Get him right now.” The neighbor across the street tells the two girls still filming to just not argue with this guy: “It’s not worth it,” she says. Then the man tells them that they are driving illegally, and the girls ask why he was trying to hit 15-year-old girls with his car.

”Because you’re 15 years old? You could marry legally in Mississippi or Alabama.” I’m sorry. Wow. WTF??? The young woman recording replies, “This is not Mississippi or Alabama, it’s Florida.” It is at this point that Breonna’s grandfather, 62-year-old Tony Nelson, comes out of the home. The unidentified man lifts his hand to say “Sir,” and Nelson replies “Don’t stick your hand out. Did you threaten a child?” The man denies this, and the teens say they have it on video, and Nelson tells the teens to go inside and show him the video.

Nelson told the Post that Breonna was hysterical when she came through the door to tell him what was happening outside. Nelson says that after the teens stopped recording he continued to talk with the unidentified man. The man attempted to defend his actions and “spoke about apologizing to the teens,” but Nelson knew that the damage was already done.

He called the Palm Beach County Sheriff’s Office to file a report. Nelson says the deputies who then arrived were cordial and seemed sympathetic when watching the video. The man had left and was interviewed the following day but no charges were filed, as the Palm Beach County Sheriff’s office says that “Based on both accounts no crime was committed.”

Nelson says that Breonna grew up in that community. He says that he became angrier and angrier after the deputies left his home, thinking about how wretched a situation this was. He says he watched the video numerous times after and spoke out about this incident because he felt compelled to: “Shame on me if I just walk away because normally I have a comfortable life.”

Listen, if you aren’t a teen, teens can be super annoying. They are just developing their egos and they are frequently loud and self-absorbed. They play music you don’t get or don’t like, and they say things that an older version of them would be embarrassed to hear them say. We were all those kids once. But being an adult who tried to bully a bunch of kids that don’t seem to have been doing much of anything except driving about in a golf cart is strange, and when you add the implication that someone doesn’t belong somewhere solely because of their race or how they look, you are exposing yourself for not simply being an ornery old fool, but something angrier and more ugly and potentially dangerous.

There has been speculation and unsubstantiated reports that the unidentified Wellington resident is an employee of the U.S. Department of Homeland Security, and that he works in Citizenship and Immigration Services in West Palm Beach, Florida. As of this story, there has been no official sourcing or identification of the man in the video. Would it be surprising to find that a person employed by our current DHS was kind of a bullying racist who was also a crappy person? No. But the United States has a lot of positions being filled with that personality type right now, and always has.