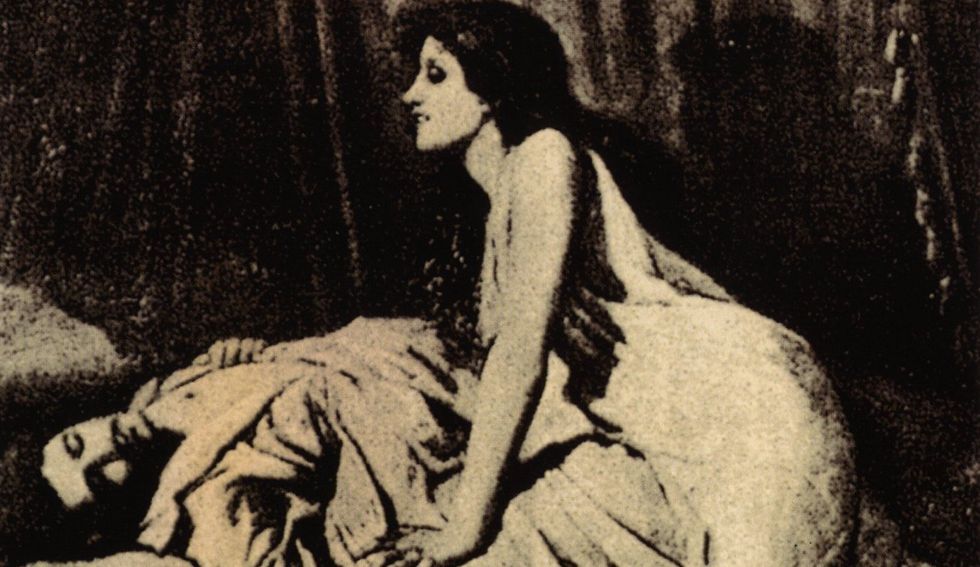 The concept of a vampire predates Bram Stoker’s tales of Count Dracula — probably by several centuries. But did vampires ever really exist?

In 1819, 80 years before the publication of Dracula, John Polidori, an Anglo-Italian physician, published a novel called The Vampire. Stoker’s novel, however, became the benchmark for our descriptions of vampires. But how and where did this concept develop? It appears that the folklore surrounding the vampire phenomenon originated in that Balkan area where Stoker located his tale of Count Dracula.

Stoker never travelled to Transylvania or any other part of Eastern Europe. (The lands held by the fictional count would be in modern-day Romania and Hungary.)

The writer was born and brought up in Dublin. He was a friend to Oscar Wilde and William Gladstone. He was both a Liberal and a home-ruler — in favour of home rule for Ireland. He turned to theatre, and became business manager of the Lyceum Theatre in London. It was his friendship with Armin Vambery, a Hungarian writer, that led to his fascination with vampire folklore. He consulted Vambery in the writing of Dracula, whose main character was loosely fashioned on Vlad the Impaler, a bloodthirsty prince born in Transylvania in 1431.

Medical source of the myth

But where did the myth of vampires come from? Like many myths, it is based partly in fact. A blood disorder called porphyria, which has has been with us for millennia, became prevalent among the nobility and royalty of Eastern Europe. Porphyria is an inherited blood disorder that causes the body to produce less heme — a critical component of hemoglobin, the protein in red blood cells that carries oxygen from the lungs to the body tissues. It seems likely that this disorder is the origin of the vampire myth. In fact, porphyria is sometimes referred to as the “vampyre disease.”

Consider the symptoms of patients with porphyria:

Fangs: In addition to facial disfigurement, repeated attacks of the disease causes the gums to recede, exposing the teeth, which then look like fangs.

Blood drinking: Because the urine of persons with porphyria is dark red, folklore surmised that they were drinking blood. In fact, some physicians had recommended that these patients drink blood to compensate for the defect in their red blood cells — but this recommendation was for animal blood. It is more likely that these patients, who only went out after dark, were judged to be looking for blood, and their fangs led to folk tales about vampires.

Reflections not seen in mirrors: In the mythology, a vampire is not able to look in a mirror, or cannot see its reflection. The facial disfigurement caused by porphyria becomes worse with time. Poor oxygenation leads to destruction of facial tissues, and collapse of the facial structure. Patients understandably avoided mirrors.

Fear of the crucifix: During the Spanish Inquisition (1478-1834), 600 “vampires” were reportedly burned at the stake. Some of these accused vampires were innocent sufferers of porphyria. Porphyria patients had good reason to fear the Christian faith and Christian symbols.

Acute attacks of the disease are associated with considerable pain, and both mental and physical disturbance. This condition has been ascribed to the English King George III, although subsequent analysis has shed some doubt on porphyria as the cause of his “madness.”

Nowadays, with our scientific knowledge of porphyria, instead of fearing these folks, we can love and care for them. Porphyria remains incurable, and treatment is mainly supportive: pain control, fluids and avoidance of drugs and chemicals that provoke acute attacks. Some success has been achieved with stem cell transplants.

Could Stoker have known of the existence of porphyria, and/or its link to vampire folklore? It was only in 1911, eight years before Stoker’s book appeared, that the diseases of porphyria (there are several types) were classified by H. Gunther. However, physician, researcher and author George Harley had described a patient with porphyria a few years earlier.

Through his gothic novel, Stoker surely wins the prize for the best example of myth entangled with medicine!

This story is an edited excerpt from the book Of Plagues and Vampires: Believable Myths and Unbelievable Facts from Medical Practice by Michael Hefferon.