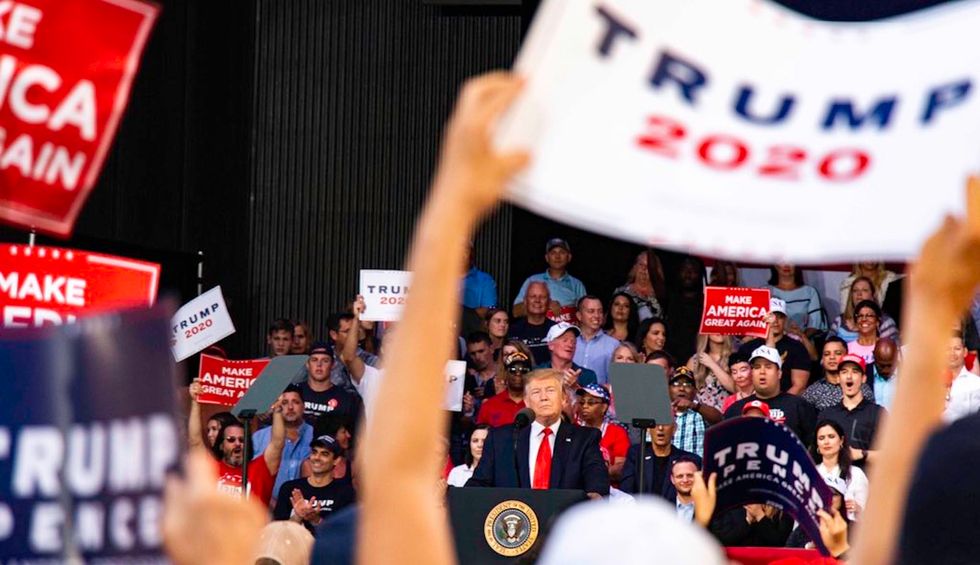 Donald J. Trump holding a rally in Panama City Beach, Florida, on May 8, 2019 // Office of the President of the United States/Donald J. Trump
Tom Boggioni
and
Raw Story
June 21, 2020

In a column for the Daily Beast, conservative — and former Republican — Matt Lewis said Donald Trump’s disastrous Tulsa campaign rally before a half-empty arena exposed what will likely dog him through the run-up to November’s election.

He has become boring and his fans are tuning him out.

With Twitter in full mockery mode over the poor turnout as evidenced by thousands of unoccupied seats after presidential promises of not only a packed house, but overflow crowds that also did not show up, Lewis wrote that Trump’s campaign is in trouble.

“It started with an underwhelming crowd, which only matters because of how he’s hyped and exaggerated expectations for them,” Lewis wrote, adding, “… even the crowd who did show up seemed to be more subdued than normal. Sure, they applauded. Sure, they cheered. But it seemed like they were going through the motions. There’s a difference between a crowd that is enthralled and one that is polite.”

Observing reactions to Trump’s speech, where fans of the president were filmed yawning as the president rambled on for over 90 minutes, Lewis claimed that the president didn’t give them “much to cheer about.”

“Once upon a time, his style was shocking and horrifying and (daresay) sometimes even fun. Today, it’s just tiring,” the columnist explained. “Like addicts who progressively need a bigger fix, Trump has desensitized us with four years of crazy tweets, stream-of-consciousness speeches, and rallies that are indistinguishable from a therapy session. He has flooded the zone with horribleness so that it’s harder to reach outrage now. One of his more offensive lines was about telling his people to slow down COVID-19 testing (so the numbers look better). The White House said, absurdly, that that was a joke. By Monday, my guess is, this line will be mostly forgotten.”

According to the columnist, one problem the president is facing is he can’t seem to fire up his base with attacks of probable opponent Joe Biden as seen by the fact that the former vice president is leading him in most polls — leaving the president swinging at air — with Lewis writing, “Unable to cast his opponent as a villain (which would be both politically advantageous and entertaining), Trump’s only option is to suggest that Biden ‘is a helpless puppet of the radical left’ and a ‘trojan horse for socialism.'”

Which gets back to the fact that the president’s speech seems to have flopped before the few who showed up.

“The speech was long. Very long. Some people started walking out at about the 90-minute mark, as he was introducing the various politicians in the house. My sense was that he kept thinking that maybe if he kept going, something would catch on—that he would capture the crowd. But he never really did,” he wrote, before adding, ” This second time around, Trump is finding that it’s always hard to try and strike lightning twice.”

“More than 120,000 Americans are dead on his watch, and Donald Trump endangered the lives of thousands of people by deciding to hold this Tulsa, Oklahoma, rally on Saturday night, where the virus was an afterthought in his speech,” he continued before concluding, “The very least he could have done was not be so boring.”