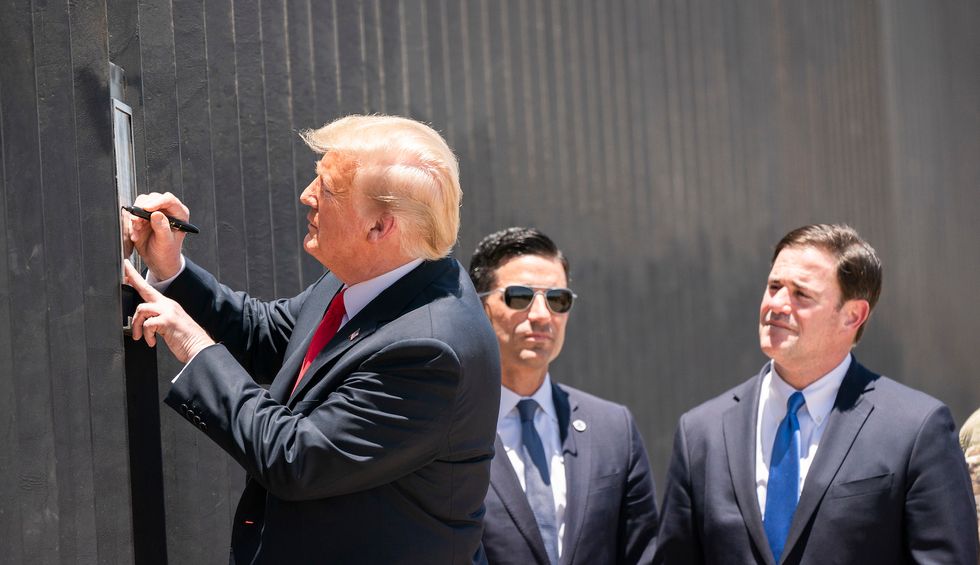 When President Donald Trump first began talking about ending “chain migration” in 2017, media outlets pointed out that his own parents-in-law had likely obtained lawful permanent residency through their daughter Melania—a naturalized U.S. citizen. At the same time that Trump was ranting on Twitter, “CHAIN MIGRATION must end now! Some people come in, and they bring their whole family with them, who can be truly evil. NOT ACCEPTABLE!” his wife’s parents were in the process of becoming U.S. citizens after five years as so-called “green card” holders.

When the coronavirus pandemic was declared, Trump saw his chance to attack immigration policies that reunite families, and in April 2020 he announced a 60-day ban on green cards that impacted people like his parents-in-law were when they lived in their home country of Slovenia. At the time he announced the ban, I was in the process of applying for my own elderly parents to obtain lawful permanent residency in the United States, just as Melania Trump must have done only a few years ago.

Under existing immigration law, U.S. citizens have been able to sponsor their spouses, children, siblings, and parents, to obtain green cards, or permanent residency. Since his presidency began, Trump has wanted to limit that sponsorship to only spouses and children under 21. To that end, he backed the RAISE Act, which would effectively have done through legislation what his unilateral ban accomplished through executive order under cover of the COVID-19 crisis.

When the 60-day ban was up in June 2020, Trump extended it to the end of the year and added a number of other visas to the list, including H-1B visas for foreign workers, to match the outlines of the failed RAISE Act. The White House claims that the ban will keep 525,000 foreign workers out of the country and make those jobs available to U.S. workers at a time of mass unemployment. One immigrant advocacy group pointed out that Trump’s ban is designed to favor immigrants from Western Europe.

The ban is the brainchild of Trump adviser Stephen Miller, who entered the White House with Trump and is considered to be the “driving force” behind Trump’s racist anti-immigrant agenda. Miller began his job with a wish list of the types of immigration and immigrants he wanted to ban, both undocumented and legal. He is considered the “architect” of the Trump administration’s most cruel policy—separating parents from their young children after they crossed the U.S.-Mexico border. Since 2017, he has been the brains behind Trump’s “Muslim ban,” the restrictions of refugee quotas, the cancelation of the Deferred Action for Childhood Arrivals (DACA) program, and more. Today, under cover of the COVID-19 pandemic, Trump has been busy deporting young immigrant children in violation of the United States’s own anti-trafficking laws.

Miller’s uncle David Glosser wrote about the hypocrisy of his nephew’s agenda, saying that had the United States adopted Miller’s anti-immigrant wish list when his ancestors were escaping the Nazis, the family would have perished. America’s immigration policies have long served white elites like the first lady, but the rest of us have often been deprived of accessing those same policies.

For all of Trump’s talk about prioritizing American workers, he has already carved out exceptions for “any alien seeking to enter the United States to provide temporary labor or services essential to the United States food supply chain.” In other words, there are some jobs that Americans are too good for and that only low-wage immigrant labor will do. The Washington Post pointed out, “So far this year, the Trump administration is approving H-2A visas at a rate 15 percent faster than last year, and it took steps to make it easier for farmers to hire temporary farmworkers even after the pandemic began.”

The U.S. Chamber of Commerce has decried Trump’s new ban, saying, “Putting up a ‘not welcome’ sign for engineers, executives, IT experts, doctors, nurses and other workers won’t help our country, it will hold us back.” Indeed, at a time when health care workers especially are in short supply, and more than 15 percent of all doctors and nurses nationwide are immigrants, it is unclear how a ban on H-1B visas that limit such workers into the country until December will help Americans. Jobless Americans are hardly going to rush to medical and nursing schools, incur huge debts, fast-track their degrees at an unheard-of rate, and emerge as fully-fledged professionals in time to handle the expected surge of new COVID-19 cases.

It is also unclear how preventing U.S. citizens like me from bringing my retired elderly parents will help American workers. My parents plan to bring their entire life savings with them to spend on private health insurance and other basic needs until the end of their lives, thereby creating jobs and stimulating the U.S. economy. More importantly, they will be able to spend the golden years of their lives with their daughter and family, instead of alone and isolated. But to Trump, my parents do not deserve the same treatment as his in-laws did.

As the immigrant advocacy group Value Our Families declared recently, “Immigration is not just about the economy. Our system is designed to unify family members and is a legal right for many Americans.” Trump has trampled over that right and the rights of so many people over and over since he took office. His trampling of rights is precisely why millions of Americans—comprising a minority, albeit a significant one—voted for him in 2016 and plan to vote for him a second time. Trump did not come into office in spite of demonizing immigrants—he was elected because he repeatedly dehumanized non-Americans, particularly brown-skinned ones. He brought with him Steven Bannon, a man who said he was a fan of The Camp of the Saints, a horrendously racist tome written by the late French author Jean Raspail, that depicted ugly caricatures of Indian immigrant hordes destroying the European way of life.

Trump’s presidency is a clear symbol of the last gasp of white supremacy angrily asserting its power over a country that, in spite of centuries of institutional policies designed to privilege whites, is becoming browner every year. As someone who spent the last 30 years of my life navigating the intricacies and obstacles of the U.S. legal immigration system, I am one of the relatively privileged ones, especially when compared to the traumatized undocumented children who have been separated from their desperate parents, or the refugees fleeing violence whose legal right to seek asylum has been decimated. And yet today, even I remain separated from my parents.

Even the U.S. Supreme Court, which far too often tilts rightward, slapped back against the president’s egregious attacks on DACA registrants. In a 5-4 decision on June 18, justices voted to keep the Obama-era program intact, offering some measure of relief to the 650,000 young immigrants who have been able to defer deportation and legally work in the United States. Justice Sonia Sotomayor correctly pointed out that Trump’s decision to cancel DACA was marked by “impermissible discriminatory animus.”

Trump has expressed such “discriminatory animus” to non-white Americans since the beginning of his candidacy and presidential tenure. Through his anti-immigrant policies, he is keeping families like mine separated. He has made no secret that his goal is to preserve white domination in America, and it is for that reason he has enjoyed the fervent, irrational, cult-like following of millions of Americans terrified at the prospect of equality with non-whites.