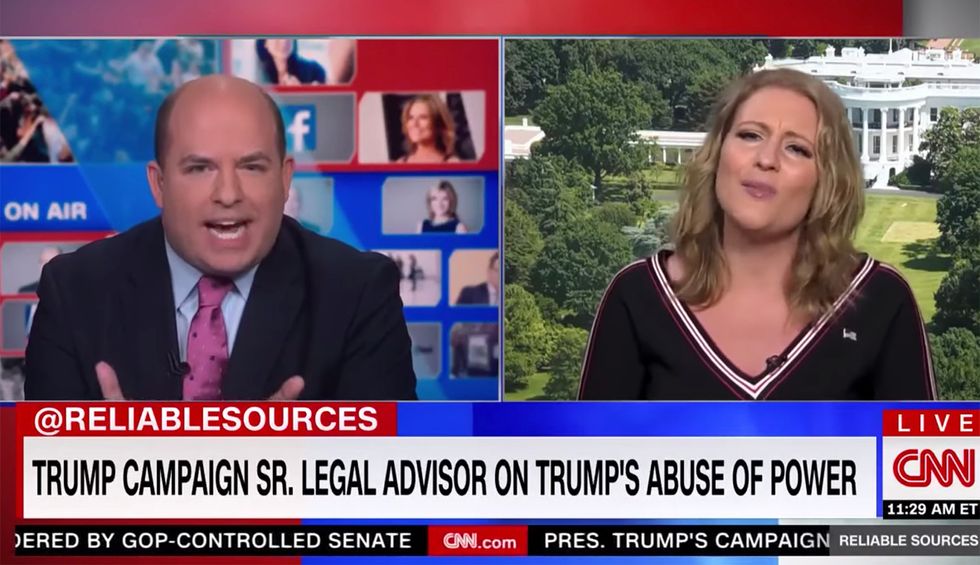 Jenna Ellis, an attorney for President Donald Trump’s campaign, on Sunday defended a lawsuit threat against CNN which seeks to suppress a poll showing the president losing to presumptive Democratic nominee Joe Biden.

“No pollster in the world would stand behind this as a legitimate poll, according to industry standards,” Ellis told CNN’s Brian Stelter. “So why would CNN? Why?”

“What industry standards?” Stelter asked. “This poll is in line with other network polls. Pretty much every poll shows Trump losing to Biden.”

Stelter explained that the network used a “normal polling procedure.”

“The only reason CNN published this, it’s junk science,” Ellis opined. “You know that. And you know that if you’re poll showed the inverse and showed Joe Biden 14 points behind, you wouldn’t have published this poll.”

“Let me finish!” she exclaimed. “Are you just going to interrupt me this whole time? Or can we actually have a reasonable dialog. This is why everyone calls you fake news. Because you finally bring me on to actually talk about things and then, yet, you just interrupt me and won’t let me make my point.”

“Your comment about polls and industry standards was totally false,” Stelter explained. “And it’s important to interrupt when you share fake information.”

“You call yourself a journalist,” Ellis said. “And it’s your job to report the facts and then let the people decide. Your ratings are so bad and so in the tank because America knows that CNN publishes activist agenda against President Trump.”

“CNN is one of the highest rated channels on cable,” Stelter noted. “If you think the ratings are so low — it’s untrue but it shouldn’t matter — why would you bother coming on?”

“I think it’s important for your viewers — the few that there are — that they get the facts and the truth,” the Trump attorney opined.

“Why is it President Trump cares about ratings at a time like this?” Stelter wondered.

“That’s not true,” Stelter chimed in.

Watch the entire interview below from CNN.