'This is big': Top GOP pollster is stunned by the sudden shift in public opinion on Black Lives Matter 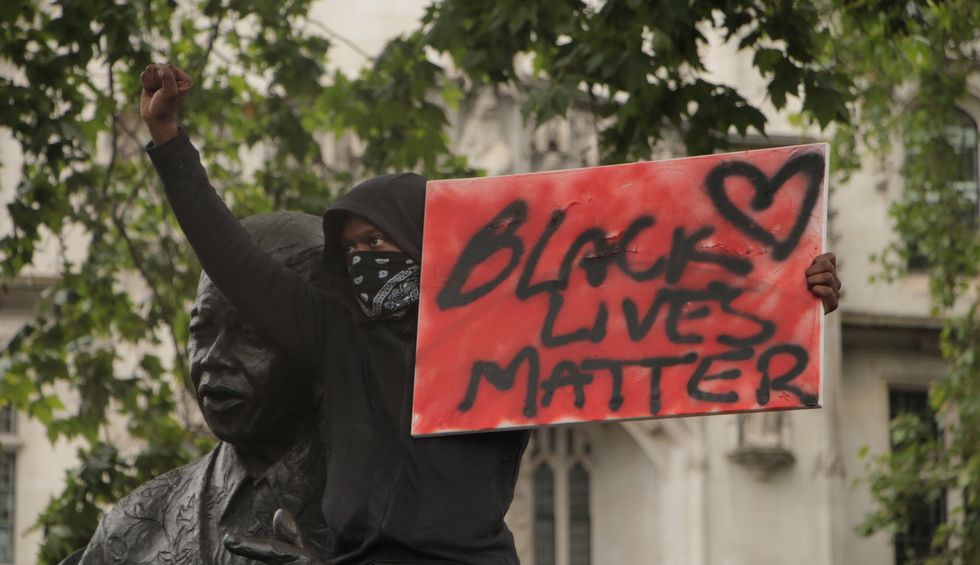 Prominent Republican pollster Frank Luntz has been floored by the apparently massive influence of the Black Lives Mattter movement in recent years and weeks. Following the killing of George Floyd under the knee of a Minneapolis police officer, protests across the country have sprung up demanding justice and an end to racism.

In the wake of these protests, which were accompanied by some rioting, looting, and extensive police violence, some believed President Donald Trump could reap the benefits of chaos. But despite these predictions, the unrest seems to have rallied support for the protesters' cause.

On Tuesday, Luntz pointed to a Politico story that cited polling showing a large shift in public opinion — among both white people and the American public as a whole — toward viewing policing as having disproportionately negative impacts on black people like Floyd:

An NBC/Wall Street Journal poll released Sunday found that “Americans by a 2-to-1 margin are more troubled by the actions of police in the killing of George Floyd than by violence at some protest.” A survey for USA Today last week showed white Americans’ favorable impressions of police declining by double-digits week over the week. Most notably, a Monmouth poll released June 2—conducted in the days after Floyd’s killing—showed, for the first time, that a majority of Americans (57 percent) and a plurality of whites (49 percent) believe police are more likely to use excessive force against African Americans. This represents a tectonic shift in public opinion: After Eric Garner was killed by New York City police in the summer of 2014, Monmouth found that 33 percent of Americans believed the black community was more likely to be abused by police; among whites, that number was just 26 percent.

"In my 35 years of polling, I’ve never seen opinion shift this fast or deeply," Luntz said on Twitter. "We are a different country today than just 30 days ago."

He added: "The consequences politically, economically, and socially are too great to fit into a tweet. This is big. This is ‘Beatles on Ed Sullivan’ big."

And on Wednesday, more data written up by Nate Cohn and Kevin Quealy at the New York Times confirmed this stunning shift.

"Over the last two weeks, support for Black Lives Matter increased by nearly as much as it had over the previous two years, according to data from Civiqs, an online survey research firm," Cohn and Quealy wrote. "By a 28-point margin, Civiqs finds that a majority of American voters support the movement, up from a 17-point margin before the most recent wave of protests began."

"Public opinion didn’t even shift this fast in support of the Civil Rights Movement during the 1960s," noted Luntz.

Will the recent shift in opinion last? News events can sometimes cause a shift in public opinion that quickly dissipates. After mass shootings, for instance, big spikes in support for gun control typically ebb as soon as memories of the bloodshed fade.

But there are reasons to think that the Black Lives Matter movement might be different. For one, the shift continues a long-term trend in public opinion that preceded the death of Mr. Floyd. By the time of the 2016 election, many white liberal Democrats held some views on race that were to the left of African-Americans over all, in what some branded the “Great Awokening.”

The Time also noted that Trump's presidency may have been a boon for the Black Lives Matter movement. Public opinion often moves against the sitting president's views, so his open disdain for protesters like Colin Kaepernick may have generated more sympathy for the movement than opposition.

There are also clear signs Trump isn't handling the moment well. His approval rating has fallen since the protests began. And Joe Biden's lead over the president in head-to-head polls has increased over the same period. Meanwhile, 67 percent of Americans say that Trump has increased racial tensions, according to a poll from NPR, PBS, and Marist.

"Trump has not communicated well for the past 2 weeks, and his poll numbers are showing it," Luntz said on Twitter. However, he warned Democrats that further developments could turn the tide against them.