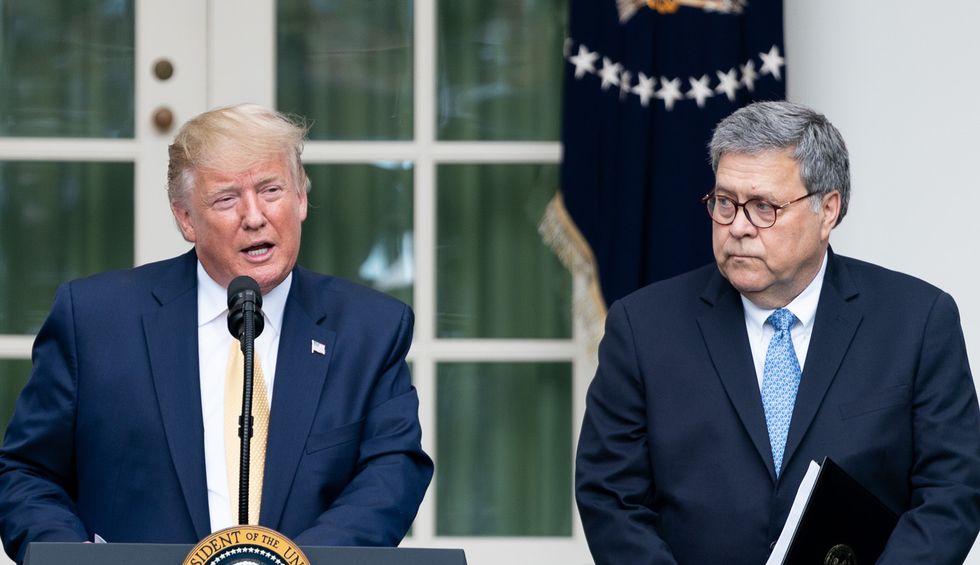 President Donald J. Trump, joined by Secretary of Commerce Wilbur Ross and U.S. Attorney General William Barr, delivers remarks Thursday, July 11, 2019, in the Rose Garden of the White House to announce he will issue an Executive Order ordering every department and agency in the federal government to provide the Department of Commerce with all requested records regarding the number of citizens and non-citizens in our country. (Official White House Photo by Shealah Craighead)
Hunter
and
Daily Kos
June 22, 2020 The Right Wing

After not just one, but two apparent false statements from Trump Attorney General William Barr on the matter, U.S. Attorney for the Southern District of New York Geoffrey Berman resigned Saturday evening—a decision he publicly said was due to "Attorney General's decision to respect the normal operation of law" in having his Deputy U.S. Attorney take over the position on an acting basis.

That doesn't end the story, however. What is still unclear is why William Barr was so motivated to remove Berman that he first issued a false claim that Berman had resigned—prompting a public response from Berman stating that he quite emphatically had not—and a second, later claim to Berman that Donald Trump had fired him—only to have Trump soon afterward declare to reporters that he was "not involved" in the firing. No matter how you parse out that series of events, it's so far impossible to come up with an explanation that is not, on Barr's part, brazenly corrupt.

For starters, Barr needs to be forced to explain why he manufactured an alleged resignation, to begin with. Barr's first claim, that Berman had resigned, was intended to pave a path for Barr and Trump to install Barr personal friend Jay Clayton, a corporate attorney with no prosecution experience whatsoever who currently serves as Trump's chair of the Securities and Exchange Commission. The Southern District of New York is currently either prosecuting or investigating a litany of apparent crimes by individuals close to Trump—and potentially by Trump himself.

That would have installed a reliable Barr ally as head of the top potential source of "trouble" for Trump, continuing what has been a newly brazen Barr-Trump effort to stifle federal prosecutions of Trump allies. (One notable example: SDNY is the office Trump and Barr have been pressuring to end an investigation into Turkish bank fraud and sanctions violations after Trump allegedly sought to quash that probe as a favor to Turkish autocrat Recep Erdogan.)

There is no other way to read the move to install Clayton other than as corrupt, given the proximity of SDNY to at this point an unknowable number of investigations that tie directly into Trump, Clayton's status as Barr ally, Barr's bizarre announcement of a resignation that did not happen, and Barr's now well-reported moves to "reach down" into numerous federal prosecutions that Trump, personally, has objected to.

According to The Washington Post, Barr met on Friday with Berman, "offering him a new position" heading the Justice Department's Civil Position if he would move from his current role; Berman evidently did not agree to the move.

Clayton, however, could only be legally installed if Berman resigned. In his letter disputing the resignation and in his eventual statement agreeing to resign, Berman was unsubtle in suggesting that Barr was not respecting "the normal operation of law" in his attempt to insert Clayton and bypass Berman's deputy, installing a second hand-picked choice as "acting" secretary.

The Post cites a single "familiar" source saying he "did not believe it was intended to head off any particular investigation," but gives no evidence to back that claim; three other Post sources only say they "believed Barr could have been spurred by long-standing tensions" between his office and SDNY—again, seemingly due to Barr's insistence that he be read into the loop on the status of investigations touching on Trump's allies, and SDNY's reluctance to do so due to the obvious stink of corruption in the requests.

That's all fine and well, but the evidence suggests otherwise. Barr did not just want Berman out of his office, and immediately: He also sought to install a personal friend in the role, and bypass laws governing who Berman's acting successor would be, and went so far as to invent a resignation when Berman was not willing to go along with the move. In any circumstance, his behavior would be bizarre.

When targeting the federal prosecutors' office responsible for the bulk of prosecutions and probes into Donald Trump's personal finances, alleged criminal acts, and now-demonstrated criminal acts of associates, and with Barr's now well-documented history of reaching down to halt prosecutions embarrassing to Trump (see: Flynn), suggesting that series of moves to be non-corrupt in nature is by far the harder lift.

As the Post's Aaron Blake points out, in offering Berman a job within the main Justice Department to convince him to vacate his post, Barr has demolished any pretense that Barr's move was based on "job performance issues." Barr did not want Berman to go because Berman was not performing up to the task or even because Barr, personally, did not want to work with him. Barr wanted Berman to go because he wanted a loyalist in the role.

Berman seems to believe the same. He resigned only when Barr acquiesced, allowing Berman's non-political, non-Barr-lapdog deputy to take over the position as the law indicated. That suggests that Berman's public fight beforehand was not a likely-doomed effort to save his own job, but a move to specifically prevent Barr from installing a handpicked ally.

It is evident that Berman, at least, believes Barr's motives to be corrupt. Clayton may yet be nominated and approved for the post, but Berman was willing to make a great number of Trump-allied enemies in order to secure an interim period in which SDNY investigations can still proceed as planned.

House Judiciary Committee chair Jerry Nadler has already indicated that Berman will be summoned to testify on these events, and soon. There still seems no urgency to force Barr's own testimony, however, part of a continued reluctance on the part of the committee and House Democrats to truly pressure Barr on even the most brazenly corrupt moves, whether it be the gassing of a peaceful protest on Trump's apparent orders or the order to drop charges against Trump ally Michael Flynn outright. That is not good enough. The premise by House Democrats appears to be that no matter what criminality Barr and Trump get up to, it can be tolerated until November under an assumption that it can later be undone.

There is no assurance of either. Barr's corrupt acts are focused on paving the way for further corruption by Trump, who has given ample evidence that would certainly again participate in crimes, in order to gain reelection. And Barr's current acts, sabotaging each federal probe into potential Trump criminality one-by-one, will have consequences that an election cannot so easily paper over.