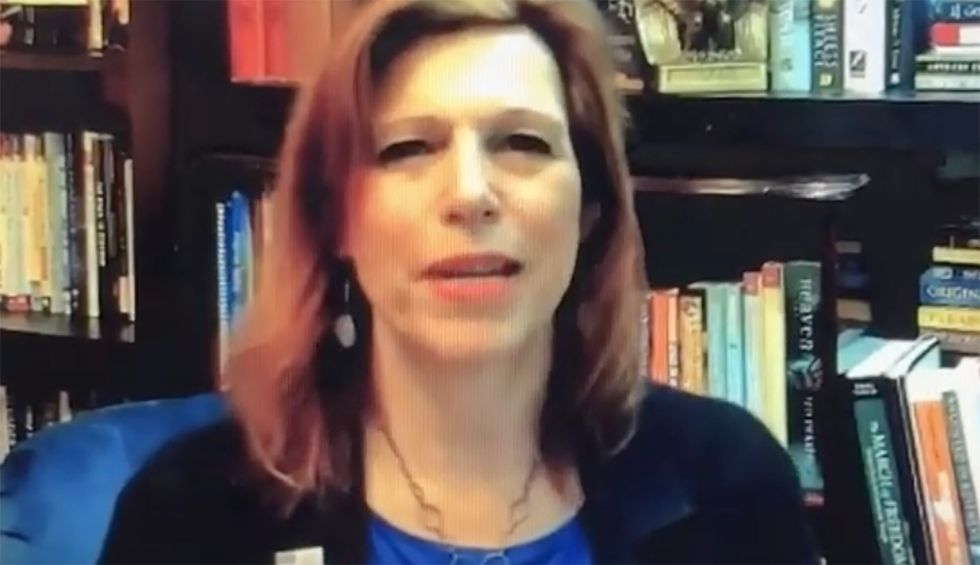 The Oregon GOP nominee for the U.S. Senate, Jo Rae Perkins, decided to let her “Q light” shine on a Facebook livestream earlier this week—and it was a doozy.

Perkins, an unrepentant “QAnon” conspiracy cultist, told her audience that the state needs to be placed under martial law, with the National Guard being sent not just to Portland—where there have been violent protests over police brutality—but to rural places like Klamath Falls and Bend. Her reasoning: Busloads of nefarious antifa activists, financed by the evil George Soros, are fanning out to these towns to wreak destruction.

The only problem with Perkins’ scenario: They’re not. The only places “antifa” activists (as well as many others) have clashed with police—and the only protests in which damage has occurred—have been in Portland.

There have, however, been a string of far-right hoaxes that have found audiences with credulous residents and even law-enforcement officers in these rural areas—utterly spurious reports of buses loaded up with black-clad antifascists, coming to their towns to break windows and harass local businesses. In turn, large crowds of heavily armed men have turned out on the streets of those towns to fend off the invading antifa hordes.

Perkins happily promoted those hoaxes, as well as a panoply of associated conspiracy theories, including the notoriously false and anti-Semitic claim that financier George Soros is secretly funding “antifa.” She also offered a new twist, claiming that the antifa hordes are “the army that Obama put together a few years ago.”

The solution, she said, was to call in troops: “The National Guard needs to come in because there is not enough police officers to squash what is going on. We need the National Guard to do that.”

Perkins said she was “in pure shock” at reading reports that busfuls of antifa protesters were heading to these towns: “This is ridiculous. In Klamath Falls?” she said. “People are out to protect their businesses. Two or three buses full of antifa came down from Portland. Wow! Wow!”

She began praying aloud during the livestream: “But Lord, now we have this evil, this antifa, Father God. And we say no more. Lord God, I ask that you bring out your warring angels to protect the cities, to protect the innocent people, to protect the business owners, Lord God.”

Perkins repeatedly described “antifa” as “evil”: “These cannot be people,” she said. “All I can see, Lord, is just the demonic outcry, oh God, of people that just people that feel they can just … total disregard, total disregard for other people, for their property. All in the name of justice for George Floyd.”

In short order, this became an attack on George Soros:

Lord, these people have no sense of morality, of what is right and what is wrong, Lord God. Not the ones that are causing this mayhem. This antifa. Father God, shut down George Soros, Lord God. End his reign of terror, Lord God. We know that he is funding this. Lord, we say. ‘Strip that money, strip that money strip that money.’ If there is a way, Father God, that President Trump’s administration can block him from being able to spend any more money, Lord God, then allow that happen.

She later reiterated: “Then we have the antifa thugs. Many many people believe that they are being paid for by George Soros. And I have seen anything to dispel that rumor. I have never seen George Soros come out and say he has nothing to do with it.”

Perkins added that “the media are supporting antifa because they are all part of the same cabal,” which she went on to explain was “the Deep State.”

But it wasn’t just Soros to blame, according to Perkins. So was former President Barack Obama:

For the record: No buses bearing hordes of ravening antifascists appeared in Klamath Falls, or any other of the multiple locations where they were rumored to be about to descend—which in Oregon included such towns as Medford, Grants Pass, and Coquille. (In Curry County, the local sheriff shared the false rumor with his constituents on Facebook, then later deleted the post when it became apparent there was no there there.) There still are no reports, yet, of similar mythical buses headed for Bend or Pendleton, but given the ease with which they appear to spread on Facebook and among “QAnon” conspiracists, that likely is just a matter of time.