No, Trump wasn't joking about holding back the government's Covid-19 testing program. It's a crime 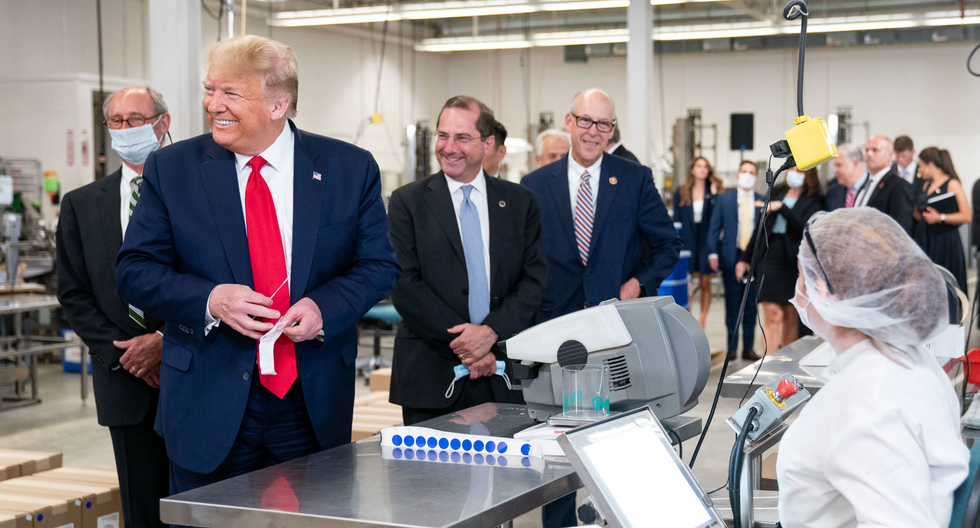 Donald J. Trump participates in a tour of testing swab production facilities Friday, June 5, 2020, at Puritan Medical Products in Guilford, Maine. The company was forced to throw away the swabs produced during his visit because of his refusal to wear a mask. (Official White House Photo by Joyce N. Boghosian)
Joshua Holland
and
Joshua Holland
June 23, 2020

White House spox Kayleigh McEnany, who swore that she would never lie to reporters, claimed that Donald Trump was only kidding around when he told the audience at his disastrous Tulsa rally that he had asked his staff to slow down testing for Covid-19 in order to keep the case numbers low.

That he was mocking efforts to rein in a pandemic that has resulted in over 120,000 mostly avoidable deaths is hardly a sound defense, but it's also not true.

Trump has repeatedly made this claim. He's said it publicly, and back in March, Politico's Dan Diamond told NPR that Health and Human Services Secretary Alex Azar "did not push to do aggressive additional testing... partly because more testing might have led to more cases being discovered of coronavirus outbreak, and the president had made clear - the lower the numbers on coronavirus, the better for the president, the better for his potential reelection this fall." And if that isn't enough evidence of his seriousness, NBC reports that "the Trump administration has been sitting on nearly $14 billion in funding that Congress passed for coronavirus testing and contact tracing."

It's important to understand the scope of the crime Trump committed. We shut down broad swaths of the economy not only to "flatten the infection curve," but also to buy time to build out sufficient disease surveillance capacity to re-open safely. This came with enormous social, psychological and economic costs, and Trump wasted that time because he didn't want big numbers. Because Covid-19 doesn't care about his prospects, his negligence got us a depression, massive social strife and a huge number of cases.

Trump claims that it's "common sense" that more testing results in more cases, which is both ridiculous and a tacit acknowledgement that he does not care about the actual number of people who are infected with Covid-19. A robust testing and contact-tracing program would have given us the necessary tools to contain the spread of the outbreak and led to much less suffering and death.

This is consistent with the lethal incoherence that has marked this regime's response to the pandemic from the beginning. Trump dithered for weeks while claiming that Covid-19 was any more serious than the seasonal flu and the media and Democrats were exaggerating the scope of problem to hurt him politically. Epidemiologists say that if we had begun sheltering in place just two weeks earlier, 90 percent of Covid-19 deaths could have been prevented.

Then, when the scope of the problem made it impossible to blame on Democrats and the media he refused to shut down travel from China and Europe. Later, he urged states to re-open before his own regime's recommendation to lock down had expired and over the objections of public health experts who said it was too soon. And finally, with states opening prematurely, he contributed to a moronic culture war over wearing masks, which has been shown to be the easiest, most effective way of containing the spread of the pandemic. It's criminal negligence, and the consequences will continue to be felt long after this election is over.