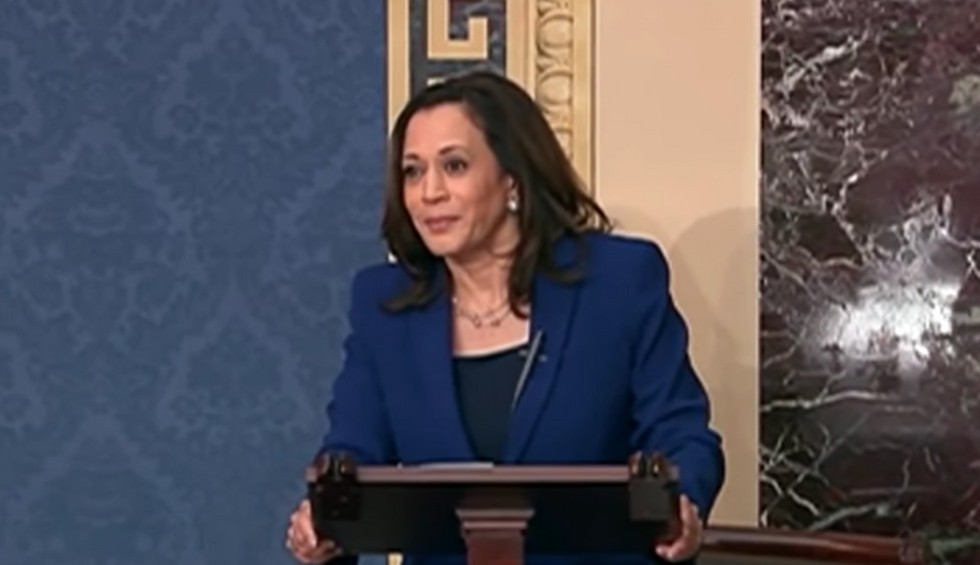 Sen. Kamala Harris (D-CA) faced off against Sen. John Cornyn (R-TX) on Tuesday over a disagreement about how to reform policing in the United States.

While speaking on the Senate floor, Harris suggested that Republicans are trying to force through a bill that does not address the concerns of Black Americans.

“We cannot answer their demands with this Republican attempt to obstruct real progress and real justice in our country,” Harris said.

Cornyn interrupted to accuse Democrats of “blocking their own lynching bill,” which he said is included in the Republican legislation.

“I think it’s important we not get distracted,” Harris replied. “We cannot pull out a specific component of this bill and leave everything else in the garbage bin. And that is the logical and practical and actual conclusion of where you are going with the suggestion that we would sacrifice issues like no-knock warrants, issues like national standard for use of force, issues like the need for independent investigations for police misconduct, issues like pattern and practice investigations with subpoena power for the United States Department of Justice.”

“It’s like asking a mother, save one of your children and leave the others!” she remarked.

Cornyn countered by asking if Harris was familiar “with the rules of the Senate that allows senators to offer amendments to improve legislation.”

According to the Texas senator, Democrats are preventing the Republican bill from being improved by opposing a vote on it.

“Is the senator aware of those options that she has?” Cornyn wondered.

Harris pointed out that she serves with Cornyn on the Judiciary Committee and “we have asked that there would be a meaningful discussion of the Justice and Policing Act in that committee and none has occurred.”

“What I’m trying to fathom,” he said, “is why the senator would rather have these negotiations occur behind closed doors as opposed to here on the floor of the Senate to see broadcast on television. Don’t you think that sort of interaction and debate and negotiation out in front of all 330 million Americans would be beneficial to healing our country?”

“Indeed,” Harris shot back. “That is the beauty of the Judiciary Committee. Our meetings are public meetings.”

The California Democrat then paused for a moment to give Cornyn a chance at rebuttal but he declined to continue the exchange.

Watch the video below from C-SPAN 2.