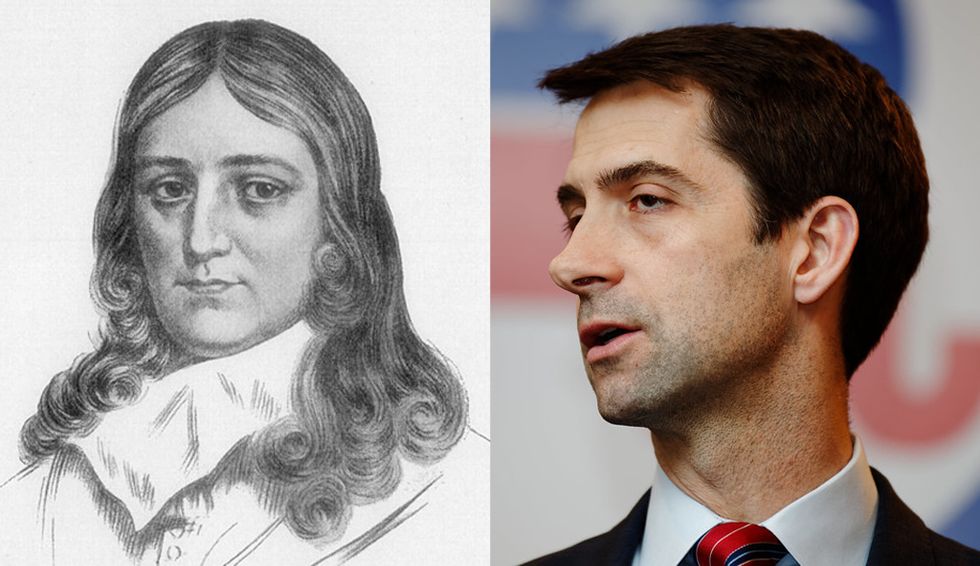 John Milton, the greatest English poet of the 17th century, was also the great champion of press freedom, and "Areopagitica" (1644), his impassioned plea for "unlicensed printing," begins every course of the history of censorship. So Milton's pamphlet provides an excellent guide for thinking about whether The New York Times should have published Sen. Tom Cotton's op-ed, "Send in the Troops."

On the one hand, Milton fills "Areopagitica" with stirring exhortations about the necessity of free thought and speech. "Give me the liberty to know, to utter, and to argue freely according to conscience." Truth "has more shapes than one," and anyway, who wants everyone "to be of one mind"? Censorship is a "manifest hurt" that is an "affront" to learning. Milton's larger point is that repressing views you don't like takes away choice, and the only way to know good is by evil. Milton, it seems, would fully support the publication of Cotton's op-ed, not because he might agree with Cotton's views, but because readers are adults, and should be trusted to make up their own minds.

But in fact, his argument is more complicated than that.

Milton is not against censorship per se, but against pre-publication censorship. The author can publish whatever he or she wants. But the Church and the government must keep a "vigilant eye [on] how books demean themselves," and if they misbehave, then the authorities must "confine, imprison, and do sharpest justice on them."

What does a book have to do to merit suppression? Here's where Milton meets what Greg Lukianoff and Jonathan Haidt call "safetyism," the notion that we must be protected from ideas or speech that might cause not just physical, but emotional damage. Milton's benchmark for when a book becomes a "malefactor" is a little unclear. Books, he says, are like mythical dragon's teeth, that could turn into "armed men." While Milton is speaking in metaphors, it seems clear that he means a book must cause actual, not potential, harm. It must inspire someone to actually commit violence.

It would not be enough to assert, as Roxane Gay tweets, that "Running this [op ed[ puts black @nytimes writers, editors and other staff in danger." You would have to prove that the article really did palpable harm. An abstract threat is no threat at all. So, again, it seems that Milton would agree with the initial decision to publish Cotton's op-ed. Spiking Cotton's opinions, no matter how noxious, as both Ross Douthait and Bret Stephens have said, would mean repressing an argument you don't like because you don't like it. Milton would probably agree that's not a legitimate reason.

Except there's a twist at the end of Milton's argument.

After Milton writes that nobody has a monopoly on truth, he draws a line in the sand: "I mean not tolerated popery and open superstition." In context, Milton means Catholicism, which Milton considered, for good reason, an active military threat to Protestant England, and probably also Judaism and Islam. There are some ideas, some concepts, some opinions, that are beyond the pale. These are justly suppressed.

The question, then, is whether Cotton's views belong to that category. Does his proposal for "an overwhelming show of force to disperse, detain and ultimately deter lawbreakers" so offend our collective values that it "proves a monster" and so should be "sunk into the sea"? A few days before the Times published his op ed, Cotton tweeted that the military should do "whatever it takes" to restore order. Even worse, he called for "no quarter," which in military-speak suggests the "lawbreakers" should all be killed, even if they surrender.

Milton reminds us that no right is absolute, that freedom of speech has its limits, both legal and by social convention. You cannot shout "Fire!" in a crowded theater; you cannot threaten violence against the president; and white people cannot say the n-word. All of these are forbidden. Does Cotton's op-ed cross the line? Arguably, yes. The op ed is factually challenged ("Antifa," did not "infiltrate" the demonstrations, as Cotton claims, mainly because no such organization exists) and the spectacle of a senator proposing to sic the full might of the U.S. military against demonstrators is repellent.

So yes, Milton would agree that The New York Times erred in commissioning and publishing Cotton's screed. In this case, the great defender of press freedom would approve of consigning this op-ed to oblivion.
Report typos and corrections to: feedback@alternet.org.
#story_page_post_article