Jared and Ivanka will be ‘shunned’ by Manhattan social circles after taking part in Trump’s ‘national atrocities’: report 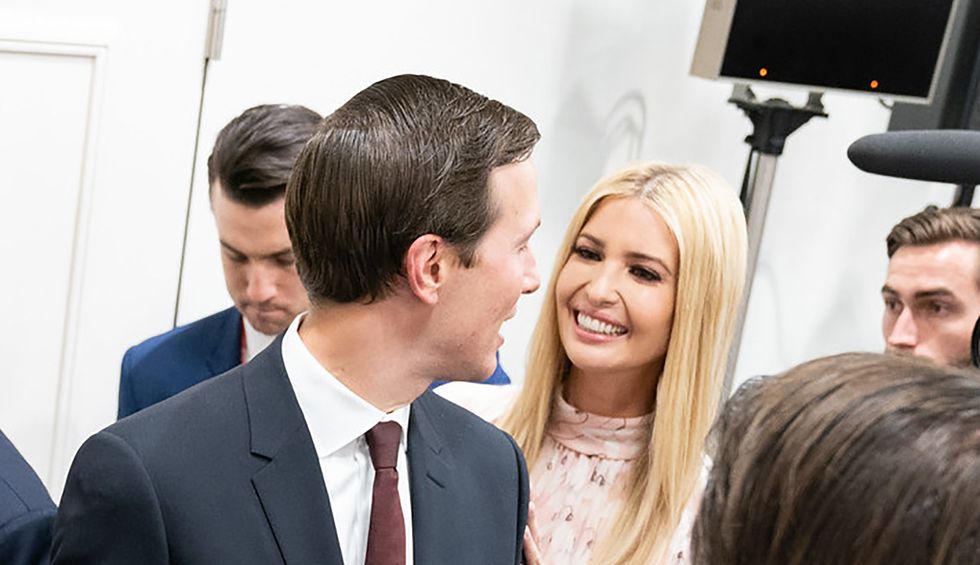 According to a report from the Daily Beast’s Hannah Seligson, Ivanka Trump and her husband Jared Kushner can expect a rocky road when it comes to social acceptance if they decide to return to Manhattan after serving as chief advisers to the highly unpopular Donald Trump.

As the report notes, the two have stood by and supported the president during the past three and half years of what the author calls “national atrocities” — and that hasn’t gone unnoticed by close friends and causal associates in the city where they both grew up.

“There’s been Charlottesville, kids in cages, and the Muslim ban. Then there are the numerous rollbacks of many civil rights impacting people of color, women, and the LGBTQ community,” the author wrote. “The affront of the moment is the disinterest of the president in protecting the First Amendment rights of hundreds of thousands of Americans protesting law enforcement’s brutal treatment of African-Americans, who are two-and-a-half times more likely to be killed by the police than whites. And over the weekend the hashtag #ByeIvanka trended online in response to her tone-deaf video commencement address amid nationwide unrest.”

As she points out, friends in Manhattan have been giving Ivanka, “a pass” for much of her time in D.C. — but that appears to have come to an end as Donald Trump’s eldest daughter is now losing the battle on social media with her Manhattan peers.

“Last week, Tavi Gevinson, the magazine editor and actress, took to the social medium to dress down a member of Ivanka’s inner circle, sister-in-law Karlie Kloss, for hypocrisy,” The report states. “Gevinson responded to Kloss’s Instagram post about ending racism by calling out the supermodel’s chutzpah of making ‘a show of championing girls’ coding and other causes while only politely disowning your family in public.’ Tevinson went where no public cultural figure has dared to go—calling out someone in Ivanka’s inner circle who has done the right virtue signaling about social issues but hasn’t uttered a critical word about the first daughter.”

“An exasperated Gevinson further vented that Kloss ‘only publicly disown[s] their politics in polite ways.’ The future Gossip Girl reboot actress then took on writer-influencer Derek Blasberg, the reigning prince of well-mannered New York society and professional best friend to a who’s-who of high-profile socialites, including Lauren Santo Domingo, Kloss, and Gwyneth Paltrow,” Seligson reports before adding, “Gevinson told Blasberg to go ‘talk to your neo fascist friends.’ Blasberg, who until this incident followed the first daughter on Instagram, has been photographed with her numerous times. (He also attended Donald Trump’s inauguration in 2017 to comment on the fashion.) New Yorker writer Naomi Fry chimed in saying: ‘ivanka literally a dm away.’ Blasberg responded to Gevinson and Fry: ‘If I thought DM’ing with Ivanka would have any impact, don’t you think I would have done it?'”

According to the report, some believe that the couple will employ a public relations team to rehabilitate their images by attempting to make the point that they tried to rein in the volatile Donald Trump to no avail.

One high society observer said the road back is not going to be easy and where they can appear will be limited.

“This is a city of many, many circles, and Jared and Ivanka will be welcome in some places and unwelcome in many,” explained Michael Gross, the author of non-fiction books on wealthy New Yorkers,” the report states. “Mr. Gross, who has met both Jared and Ivanka and described them each as ‘intelligent,’ says it is unlikely the couple will be able to walk into an ACLU fundraiser or even the PEN American Literary Gala. ”

“It is likely they’d encounter hisses and boos. I can imagine some people will throw pies in their face,” he elaborated. “I don’t know.

While one friend of the couple doubted they would return, another said Ivanka will have a lot to live down.

“I’m talking about the sensible Republicans, not the Lincoln Project Republicans. Those bridge people will be important,” a friend of the first daughter stated before referring to the latest White House controversy. “The further down [President Trump] goes, there is a drag on her, regardless of her role. I’m not sure if the Bible thing was her or Hope’s idea but it was fucking horrible.”