Former Marine officer: Military leaders must have the courage to speak out if asked to do something unconstitutional 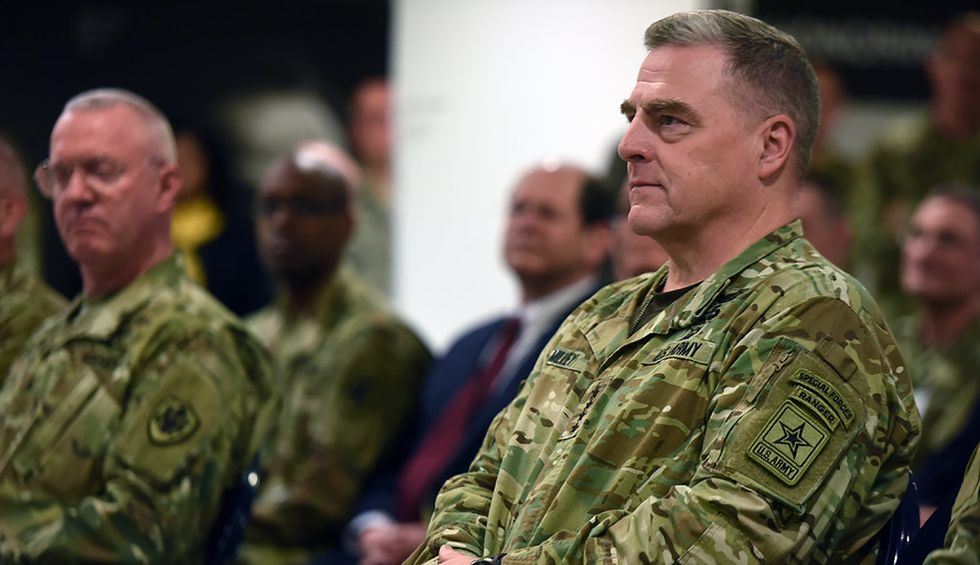 Army Gen. Mark Milley, chief of staff of the Army, at a cake-cutting honoring the 381st birthday of the National Guard and unveiling the new National Guard Bureau Organizational Badge, the Pentagon, Washington, D.C., Dec. 13, 2017. The badge is authorized for wear while assigned to the NGB and is not permanently awarded. (U.S. Army National Guard photo by Sgt. 1st Class Jim Greenhill)
Alex Henderson
June 15, 2020

June 1, 2020 will go down in history as the day in which nonviolent George Floyd protestors were violently cleared from Lafayette Square in order for President Donald Trump to walk from the White House to St. John’s Episcopal Church for his now-infamous Bible photo-op. Two of the officials who accompanied Trump that day were Defense Secretary Mark Esper and Gen. Mark Milley, chairman of the Joint Chiefs of Staff — and Vietnam veteran Sandy Alderson, in an op-ed published by the Tampa Bay Times on June 15, stresses that it was absolutely wrong for Esper and Milley to be there.

“I was appalled by the images of Esper and Milley as they accompanied their commander in chief for a photo-op at St. John’s Church a short distance from the White House,” asserts Alderson, who served as a U.S. Marine officer from 1969-1973 and is a former manager of baseball teams the Oakland A’s and the New York Mets.

Alderson notes that Milley has publicly stated that it was a “mistake” to walk across Lafayette Square with Trump on June 1. And military veterans, Alderson stresses, must stand up when they are told to do something unethical.

“Our military is subject to civilian authority, as it must be in a democracy,” Alderson writes. “The president is the commander in chief. But our military leaders must have the courage and integrity to say ‘no’ when an order, or even a request, from that civilian authority violates the Constitution or undermines one’s oath to uphold it. Even the perception of such a violation, as the images of Esper and Milley at St. John’s Church conveyed, can have dangerous consequences.

Alderson notes that two retired U.S. Marine generals who were part of the Trump Administration — former Defense Secretary James Mattis and former White House Chief of Staff John F. Kelly — have been calling Trump out lately. And he is hoping that other veterans will have the courage to do the same.

“I was heartened by comments from retired Marine Gens. Jim Mattis and John Kelly condemning the events in Lafayette Square,” Alderson writes. “But former military leaders can only scold a rogue president, not thwart one. We should all keep this in mind when we vote in November.”