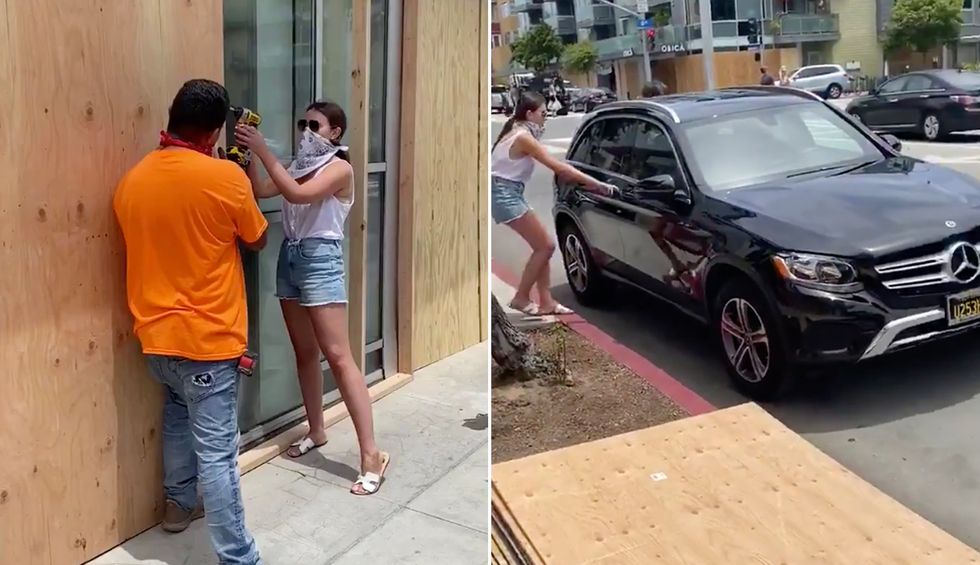 As protests continue nationwide, some volunteers are coming together to clean up and rebuild areas affected by looting, arson, and vandalism. Worldwide, social media is being used to share images, resources, and views on the issues of racial injustice and the Black Lives Matter movement. Unfortunately, some people are using this time to gain social media popularity and pose as contributing to efforts to rebuild and care for the community.

A video of a woman in California pretending to help board up a store window went viral Monday after it was shared on Twitter. "This lady stopped someone boarding up a store in Santa Monica so she could hold the drill for a picture, then drove away. Please don't do this," the post read. Commenters including a staff member from The New York Times identified the woman as Fiona Moriarty-McLaughlin, a writer for the conservative Washington Examiner.

In the video, Moriarty-Mclaughlin can be seen taking a drill from a volunteer, posing with it to have her photo taken, then proceeding to run into her Mercedes-Benz. The video prompted extreme backlash, resulting in her deleting her social media account. Viewers are calling it an example of “performative activism,” a form of activism in which individuals post or pretend to support a cause in order to gain a following or make themselves look better to others. It's a form of hypocrisy, because these people don’t actually care about the cause.

"The problem here is that she's 1) using this terrible situation to promote herself instead of the man who's actually helping and 2) completely insensitive to racial / class tensions," a Twitter user wrote in a follow-up thread. "Influencers: use your platform for ACTUAL good, not the PERCEPTION of good."

Celebrities and social media influencers worldwide are being called out for posting images saying “Black Lives Matter” or blank black squares on their platforms while perpetuating racism or not actually being down for the cause. Those who actually support the issues in question are being asked to do more with their platforms. People are calling for them to share resources and vital information because of their level of reach.

Various celebrities have hopped on the performative activism bandwagon in an attempt to not be ostracized by posting a single image saying “Black Lives Matter” or, more recently, a black square to avoid being questioned about where they stand. But a black square is not enough. While the gesture is great for solidarity and spreads awareness to a point, more can be done. Instead of sharing a black square just to please followers, celebrities could share information like resources for those protesters, or actions for those who cannot physically attend a protest. In no way am I dismissing the posting of a black square during #BlackOutTuesday for those who wish to use it show sincere solidarity—but if you can do more, you should. This is the time to do more than flood social feeds with a black image.

While not the same as posting a black square on social media, Moriarty-McLaughlin’s action is a form of performative activism that’s far too common in this digital world. In order to gain likes, people have been attending protests solely to take photos, or posting quotes relevant to trending topics without knowledge of their history. In addition, many influencers have been accused of volunteering or donating online only to promote the image of being charitable. The viral video sheds light on the reality of how many people would rather post about a good cause on social media to create the illusion of involvement than actually participate.

Since its posting, the original video has received over 70,000 likes and has been reposted thousands of times by the public, celebrities, and activist organizations alike, with many questioning the intent behind the photo. "And notice that she's pretending to be part of the clean up crew. Not the protest," a user wrote on Twitter. “I wonder what her caption will be."