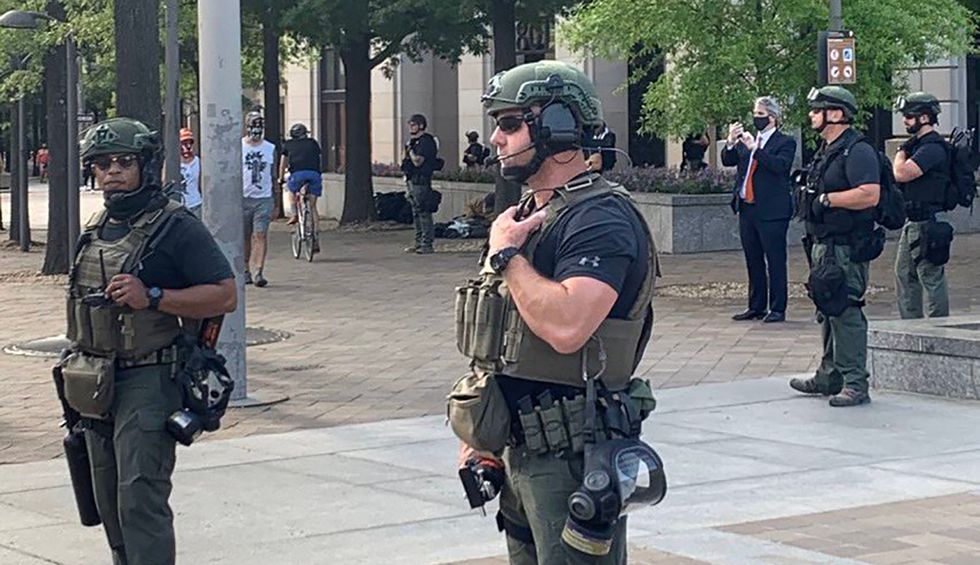 Civil liberties groups and Democratic members of Congress are increasingly raising alarm at the Trump administration's rapid deployment of unidentified law enforcement officials across Washington, D.C. as mass protests over the police killing of George Floyd continue to grow in the nation's capital and across the United States.

Journalists covering the demonstrations on the ground in D.C. have in recent days documented numerous instances of armed law enforcement officers without any identifiable markings or badges refusing to say who they are or what agency they're from.

"We cannot tolerate an American secret police," tweeted Sen. Chris Murphy (D-Conn.), who along with Senate Minority Leader Chuck Schumer (D-N.Y.) introduced legislation Thursday that would require law enforcement officers and members of the armed forces to identify themselves and the agency they work for.

"The United States would normally condemn this tactic if used by dictators of other countries, and its use here directly threatens our democracy," Murphy said in a statement. "Americans have a right to know who is patrolling their streets, and to have recourse if their massive power is misused."

Refusal by law enforcement officials to identify themselves to the public is "ordinarily associated with the security forces of rights-abusing regimes," the Knight First Amendment Institute at Columbia University wrote in a letter (pdf) to Attorney General William Barr on Friday.

The group said the spread of unidentifiable law enforcement officials around Washington, D.C. raises "grave constitutional concerns" because it has a chilling affect on free expression.

"They intimidate and instill fear in members of the public, and discourage the exercise  of expressive and associational rights," the letter continued. "They undermine the legitimacy of whatever demands these armed personnel make of the citizens with whom they interact. They frustrate accountability, because protesters and members of the public cannot know whom to hold responsible when these personnel engage in conduct that is abusive or unlawful. And by guaranteeing impunity, these practices enable discrimination, gratuitous violence, and other lawless behavior."

Back outside the White House. Today the perimeter has been pushed back another half block. Federal law enforcement… https://t.co/2mfMCos5ol
— Garrett Haake (@Garrett Haake) 1591205466

As the New York Times reported Thursday, "the question over the federal law enforcement practices comes as Attorney General William P. Barr has flooded Washington with agents from the FBI, the Bureau of Alcohol, Tobacco, Firearms and Explosives, the Department of Homeland Security, and the Bureau of Prisons."

"Barr on Wednesday night further empowered those teams from the Bureau of Prisons with the authority to make arrests at the demonstrations," the Times noted.

In addition to Barr's "vast, nameless army," busloads of U.S. soldiers have also arrived in Washington, D.C. in recent days on the orders of President Donald Trump, whose military-heavy and violent response to peaceful demonstrations has been condemned as fascistic by lawmakers and rights groups.

In a letter (pdf) to Barr on Saturday, senior members of the House Oversight Committee demanded a full list of the departments and agencies that have been activated in response to mass protests over Floyd's killing and immediate answers as to why officials are concealing their identities.