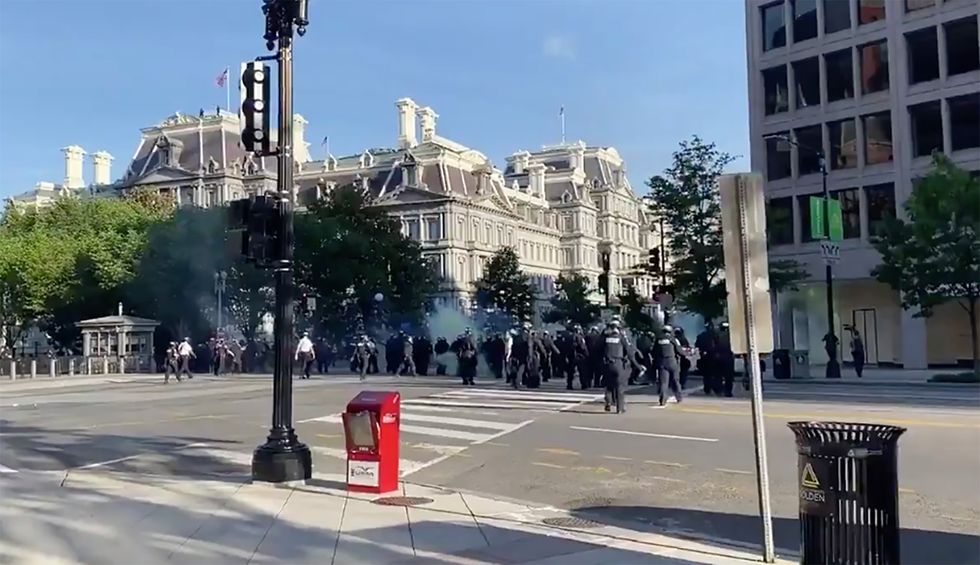 The American Civil Liberties Union is demanding a congressional probe into the deployment of tear gas, rubber bullets, and other "indiscriminate weapons" against nonviolent demonstrators in Lafayette Square outside the White House on Monday evening—a use of force apparently greenlit by President Donald Trump so that he could enjoy a photo opportunity of himself marching through the cleared area on his way to nearby St. John's Episcopal Church.

Hundreds of protesters were pushed away from Lafayette Square, where they were protesting the police killing of George Floyd, by the National Guard, U.S. Park Police and Secret Service. The ambush began half an hour before the city's newly imposed curfew of 7 p.m. went into effect. When the crowds were cleared, the president walked through the park to visit the historic St. John’s Episcopal Church, which had been set on fire Sunday.

The sudden use of force left early protesters bruised, bleeding and in shock. Although the night would ultimately end with a spattering of smashed windows and vandalized businesses, the scene in front of the White House when federal law enforcement descended was far from the "violent mobs" Trump described in his speech. The gathering was smaller and calmer than previous evenings, with people dancing and singing to a woman playing a guitar instead of knocking over barricades.

Jamil Dakwar, director of the ACLU's Human Rights Project, denounced both the nature and the timing of the assault on the unsuspecting demonstrators, given that it happened just as Trump delivered a speech from the Rose Garden in which he threatened tougher police tactics—including use of U.S. military forces—to quell protests in cities nationwide.

"This appears to be grossly unjustified use of a dangerous chemical weapon on protesters and raises serious human rights concerns under international law," Dakwar said of what transpired in Lafayette Square. "Health experts warned that the use of tear gas can have long-term effects on respiratory function. Elected officials, including Congress, must investigate this politically-motivated and life-threatening use of indiscriminate weapons."

This appears to be grossly unjustified use of a chemical weapon on protesters and raises serious human rights conce… https://t.co/cGmsLmg5WN
— ACLU (@ACLU)1591066920.0

"President Trump has always shown us exactly who he wants to be—a dictator," Nadler said in a statement late Monday night. "Today, Trump demonstrated once again that he is incapable of leadership and knows only how to sow division.  In the midst of the coronavirus pandemic, which has disproportionately impacted African Americans, the killing of George Floyd tore open a deep wound in an already grieving nation.  Understandably frustrated, thousands of Americans – the vast majority of whom are peacefully exercising their constitutional rights – have taken to the streets to make clear their anguish and frustration with a society that has not addressed the fundamental problems of racial and economic inequality."

Instead of recognizing the rightful "frustration" of Americans nationwide and trying to "soothe tensions," added Nadler, "Trump—from the Rose Garden no less—threatened to deploy armed soldiers to ‘dominate’ the streets, and allowed tear gas to be fired on peaceful protesters so he could walk across the street for a photo op. This is disgusting, and as far from the 'rule of law' and the Constitution as it gets."

Rep. Sheila Jackson Lee (D-Texas), also a member of the Judiciary Committee, rejected Trump's call for state governors—who he called "weak" in a White House phone call earlier on Monday—to get tougher with demonstrators in their respective states.

"They are not weak, they are confronting the humanity of their people," the congresswoman said in a thread on Twitter. "Violence to suppress protests that are guaranteed by the constitution is unacceptable."

"When you refuse to use violence to suppress the constitutional right of innocent protesters, who are in pain over the tragic murder of a fellow citizen," she added. "That is not weakness, that is strength!"