Why 'religious freedom' stokes coronavirus protests in the US 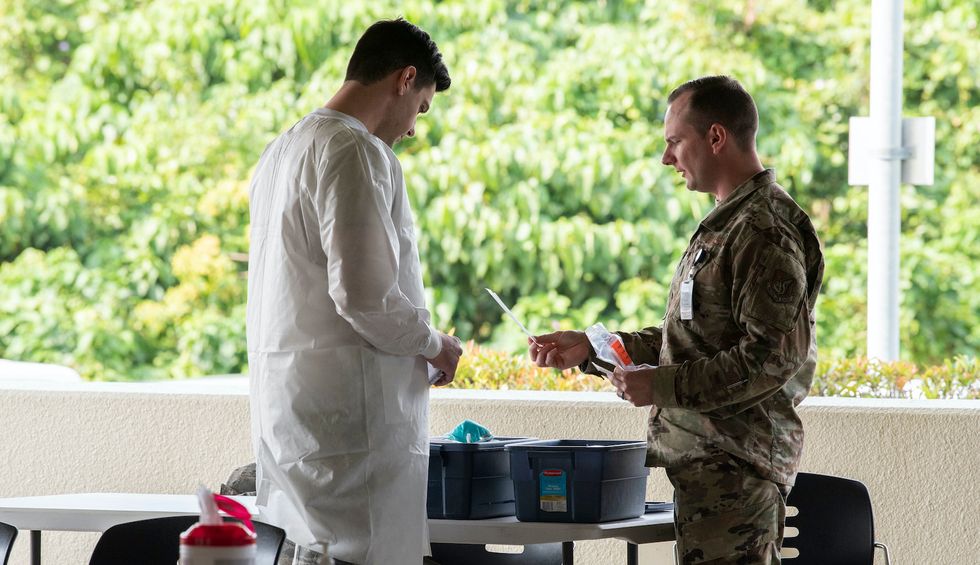 Airmen from the 18th Medical Group prepare for COVID-19 testing at Kadena Air Base, Japan, March 20. Under the most current guidance from the Centers for Disease Control, the 18 MDG has increased its testing for the disease. Those who are tested become Persons Under Investigation (PUI), are contacted by Public Health, placed into isolation and instructed on how to avoid spread of their illness to family members in the home. Public Health interviews the PUI and develops a list of “close contacts” who are then called and given instructions to quarantine for 14 days. A close contact is someone who lived with or cared for a PUI, had direct physical contact with a PUI, or shared eating utensils or had prolonged close conversation with a PUI. On average, lab results take 2-5 days to return. If results are negative, isolated and quarantined individuals will be notified and released. If results come back positive, quarantine for the close contact will continue for 14 days and isolation for the PUI will continue until the PUI is medically cleared. Someone who has had contact with someone deemed a close contact does not need to be placed in quarantine but should continue to practice social distancing. (U.S. Air Force photo by Airman 1st Class Mandy Foster)
Pamela E. Klassen
,
The Conversation
and
Pamela E. Klassen
May 05, 2020Belief

Religious freedom, cherished as an American ideal, has been frequently invoked in the United States during protests against COVID-19 public health measures.

In Canada, forms of protests — including by churches — are more likely to focus on the systemic underfunding of long-term care and homeless shelters or the lack of sufficient medical and water infrastructure in Indigenous communities.

Across the U.S., conservative Christians flouted state and municipal social distancing orders as late as March 31, sometimes by overtly breaking the law, claiming that God, not the state, will protect the people.

During the Christian Holy Week, evangelical and Pentecostal church leaders, often backed by Republican politicians, brought lawsuits against state and municipal governments, arguing that curtailing religious gatherings for the sake of limiting the spread of COVID-19 was a breach of religious freedom.

With lightning speed, federal and state lawyers weighed in on the balance between public health measures and religious liberty.

By contrast, the story in Canada is largely one of religious organizations of all varieties co-operating with public health measures. To date, there is no equivalent in Canada of these high-profile COVID-19 legal battles in which churches reject both public health directives and state legislation.

Religiously based suspicion of scientific and government authority is not unique to conservative Christians; Hasidic Jewish communities share these suspicions and constitute a significant number of those infected with COVID-19 in New York state.

Even in the case of Hasidic Jews, however, the border might make a difference: Hasidic communities in Québec have been praised for their diligence in adhering to social distancing, in contrast to those in New York, where some rabbis have mocked public health recommendations.

The contrasting responses to COVID-19 in Canada and the United States are rooted in very different national attitudes about individual and collective responsibility for public health.

In the United States, Democratic front-runner Joe Biden may come to embrace Bernie Sander’s plan for “Medicare for All,” but even the devastating reality of being the country hardest hit so far by COVID-19 has not seemed to turn the tide of public opinion on the need for universal medicare.

In Canada, by contrast, leaders across the political spectrum are throwing their support behind public health care, with even some conservative politicians calling for more funding, especially for long-term care. While Donald Trump tweeted a call to anti-public health protesters to “liberate” their states, in Ontario, Conservative Premier Doug Ford dismissed a scattering of such protesters in Toronto as selfish “yahoos.”

Invoking religious freedom in an attempt to opt out of health-care legislation is much more common in the U.S. than Canada. Both countries protect religious freedom, dating back to 1791 in the United States with the First Amendment of the constitution guaranteeing the “free exercise” of religion, while in Canada, the Canadian Charter of Rights and Freedoms has protected the “freedom of conscience and religion” since 1982.

Religious freedom as a rallying cry

These parallel guarantees, however, stem from very different histories of using religious freedom as a rallying cry, including to resist public health care. I’ve discussed this in my research, especially in relation to women’s reproductive health.

In the wake of former U.S. president Barack Obama’s Affordable Care Act, for example, Catholics and evangelical groups used a religious freedom argument to contest the new mandate that their health insurance plans provide access to contraception for women employees.

In Canada, the less frequent citing of religious freedom rights in the courts to curtail health-care access may be related to a wider acceptance of health care as a public good and a basic human right.

In both Canada and the U.S., the struggle for publicly funded health care in the mid-20th century depended on coalitions of politicians, medical professionals and religious leaders. In Canada, a Baptist minister-turned-politician, Tommy Douglas, galvanized the country with a vision that public health care for all was a human right and, for some, also a religious obligation.

Similarly, in the U.S., when Dr. Montague Cobb, leader of the National Medical Association, successfully argued for Medicare before Congress in 1965, he concluded his testimony with a Christian hymn.

The Canadian version of public health care, however, now serves a much wider range of the population than Medicare does in the U.S., and has become a cornerstone of Canada’s national identity, with minimal overt connections to religion.

But in the United States, public health care remains a source of profound national and religious division. The current Republican administration regularly uses religious freedom legislation, including conscientious objection rules for health-care providers, to chip away at Medicare, limiting access to health care for women, LGBTQ, poor and rural people.

A time of reckoning is coming when public health measures and public and private health-care delivery will be assessed for their effectiveness during the COVID-19 pandemic. The role of religious communities and the ideals of religious freedom in supporting or impeding public health must be included in this reckoning, especially in the United States.

Pamela E. Klassen, Professor of the Study of Religion, University of Toronto