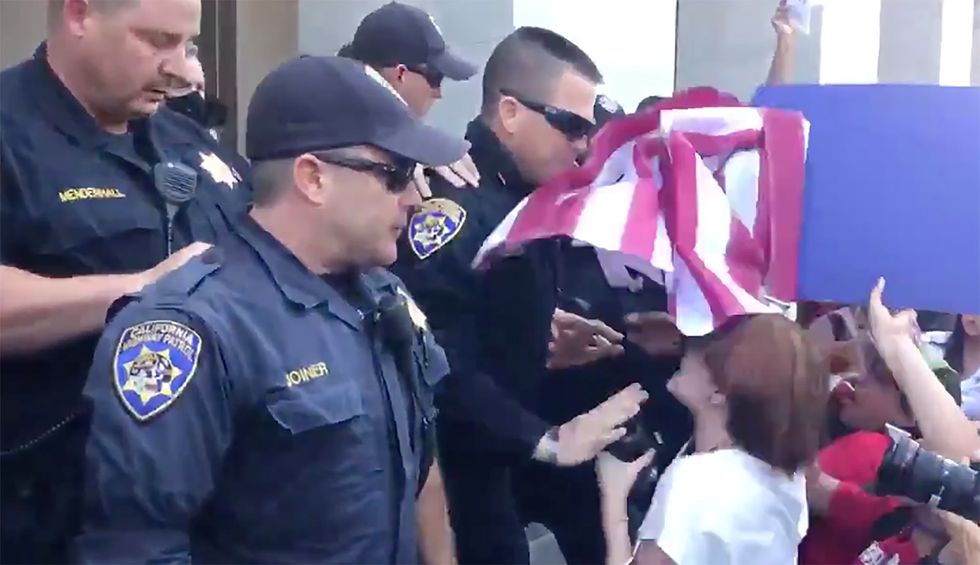 Image via Screengrab.
Lauren Floyd
and
Daily Kos
May 04, 2020

With #BlueLivesMatter trending Sunday, Twitter users pointed out just how much protesters fighting coronavirus stay-at-home orders sound like activists advocating for the basic human rights of Black people, minus the part about Black people of course. “MY RIGHTS DON'T END WHERE YOUR FEAR BEGINS,” one sign read at an anti-quarantine protest in California.  “STOP TYRANNY,” another demanded.

Those are almost exactly the same asks the Black Lives Matter movement has been making. Only, they aren’t advocating to open coffee shops or spas in the face of a deadly pandemic. They are fighting to save the lives of Black men, women, and children who too often become victims of police brutality. It’s that very movement that some police officers and supporters protested with the counter-movement dubbed Blue Lives Matter in 2014. Apparently, take away the part about Black lives mattering, and protecting constitutional rights—even when it means opposing police—becomes important enough to send white demonstrators to the streets in masses.

”How curious... looks like some of the Blue Lives Matter crowd weren’t as pro-blue as they were anti-black. Funny how that works,” Theodore Johnson, a senior fellow at the Brennan Center for Justice tweeted. A Twitter user who goes by Emily @randomfandom88 said: “Blue lives matter until Karen and Chad want to get a haircut and eat at a Mexican restaurant.” The tweet, in response to protest video, was liked more than 100 times.

Jaime Ponce, a supporter of entrepreneur and political commentator Andrew Yang, shared the same video in a tweet. "#whiteprivilege is telling #POC’s to respect the police but when it’s your turn to do that you do this instead,” Ponce wrote in the tweet. “The only time #BlueLivesMatter to them is when they’re beating or killing us."

Russell Drew, another Twitter user, tweeted a meme of a fully-engaged hypocrisy meter. "To right wing activists, the term #bluelivesmatter just means that police officers should be able to mistreat black and brown people,” he said in the tweet. “It was never about actually respecting police officers. These clowns always expose their true selves."

Other Twitter users pointed out the “white privilege” at play when anti-quarantine protesters showed up to rallies carrying guns but still weren’t deemed a threat. Demonstrators dressed in military fatigues, carried guns, and gathered outside the Governor's Mansion in Nevada Saturday, according to The Nevada Independent. They carried signs reading “Open our Churches,” “Open All Business Now,” and “Set NV Free!!!” “If you are an elected representative or a governor and you don’t like the Constitution, you want to govern or rule (like a) dictatorship, go to another country,” one protester reportedly yelled through a bullhorn.

At the California protest, demonstrators shouted in officers’ faces and waved American flags at them. "If you believe #BlueLivesMatter, I assume you’re livid about armed militias yelling at cops protecting state houses, right? Asking for some friends," social media user Oren Jacobson tweeted.