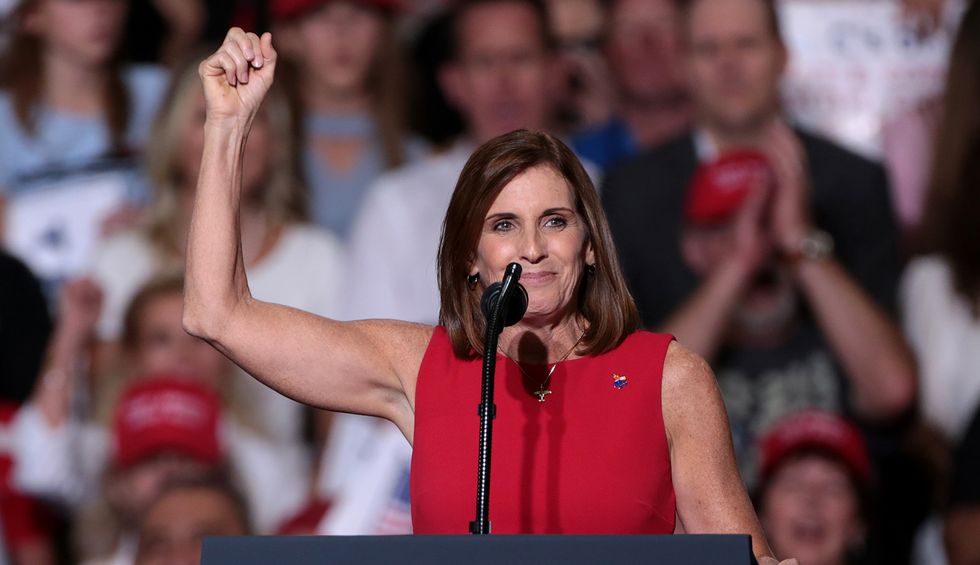 Image via Wikipedia.
Kerry Eleveld
and
Daily Kos
May 08, 2020 The Right Wing

Senate Republicans are such a pathetic lot of craven misfits. First they voted to ensure a raving lunatic would be at the helm of our country right as a global pandemic was infiltrating America. Then they tried to cut Donald Trump loose when they realized he wasn't doing so hot as national testing lagged, body bags piled up, and he paraded his sociopathic incompetence on the airwaves every day.

After the Senate GOP campaign arm circulated a memo dissuading the caucus from defending the indefensible (i.e., Trump), the orange menace predictably threatened to kneecap every GOP senator who left him for dead. Now many of the GOP's most vulnerable caucus members are either publicly lavishing praise on Trump for his wildly incompetent coronavirus response or tiptoeing around him for fear of retribution. But God forbid any Senate Republican might call on him to do better when actual lives are at stake, with thousands of Americans already gone due to Trump’s sheer incoherence and thousands more, who are alive right this minute, set to die over the coming months as he continues his deadly leadership charade.

North Carolina Sen. Thom Tillis isn’t particularly concerned with those casualties except as they relate to his reelection. According to Politico, Tillis is predicting the 2,000-deaths-a-day headlines will die down by November, replaced by nothing but good news.

“We’ll be doing millions and millions of tests, we’ll do the antibody tests, we’ll have good reports, I think, on the beginnings of economic progress,” Tillis told Politico. “And I think all those things will benefit the president and they’ll benefit me.”

Not to worry, folks, Tillis' focus is right where it should be—on himself. Never mind all the loved ones lost, the families that can't feed their children, the unyielding incompetence that is costing an untold amount of American blood and treasure. Tillis (whose reelection prospects are worsening) is projecting optimism about the election and likes his chances. Essentially: Everyone else can just suck it.

Iowa's Sen. Joni Ernst was all sunshine and rainbows too.

“Generally, I feel [Trump’s] done a very good job,” Ernst said. “He was right on it from day one prohibiting travel from certain countries and so forth. I think it was the right thing to do.” Except that the virus was already here and spreading as Trump spent the nearly two months dismissing the lethal invader as a "hoax." Meanwhile, back in reality, American deaths sped past 75,000 Thursday and will easily surpass 100,000 in the next several months. But sure, Trump was "on it," whatever that means.

Georgia Sen. David Perdue, who just recently shocked a group of private donors with the news that his seat was competitive, hailed Trump's leadership as "tremendous." Absolutely, if you're judging by maximal carnage.

Those three senators are still hoping against hope that Trump doesn't morph into Trumptanic, because if he does, they've sealed their fates.

Some of the more endangered GOP senators are splitting some pretty fine hairs. Maine Sen. Susan Collins, for instance, called Trump's China travel ban "appropriate" but admitted that his response to the pandemic has been "uneven." She also said he should steer clear of pushing medical advice and treatments. Whoa, don't get too tough on him, senator—Bleachgate was just a cheery bit of Trump sarcasm. Trump told us so.

Arizona Sen. Martha McSally wants to bearhug Trump with every bone in her body but just may have concluded it's not the smartest political move after several polls have showed her trailing Democrat Mark Kelly by nearly double digits. McSally doesn't possess the integrity to actually criticize Trump, but the best positive spin she could offer on Fox News was to say he's "cheerleading for Americans and Arizonans.” Cheering on the death march, actually. Trump is cheerleading the "warriors" putting their lives on the line to reboot his precious economy.

And Colorado Sen. Cory Gardner—well, he's advising people to just look away from this entire train wreck. “It’s important to not look and try to provide some kind of a grade,” Gardner said at a virtual event in late April. “I think what’s important is trying to do better and better every day.”

Way to take a stand, senator. Any chance you know people are dying out there? Lots of them.

And so Trump's campaign of coronavirus butchery continues, underwritten by Senate Republicans.