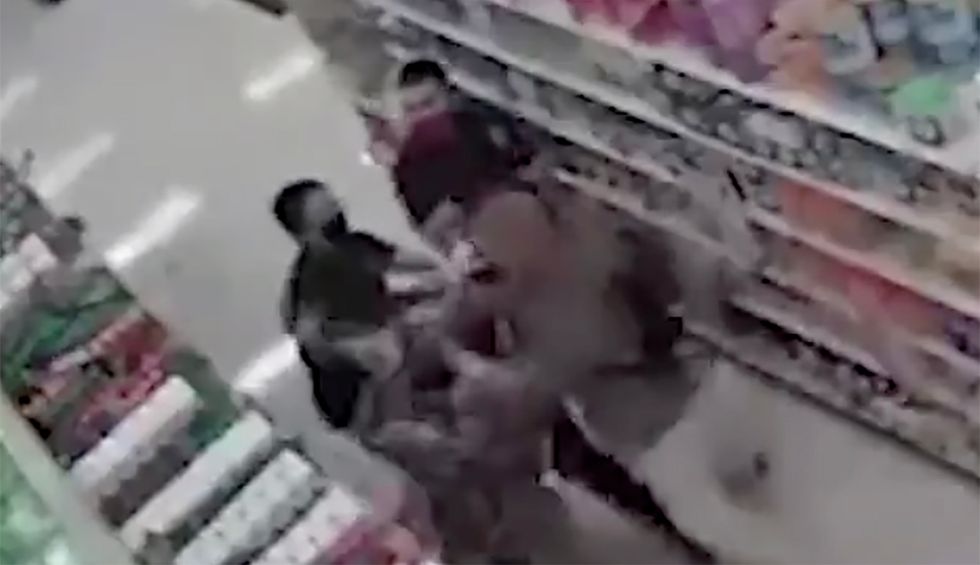 Image via Screengrab.
Aysha Qamar
and
Daily Kos
May 13, 2020

As stores reopen nationwide, safety precautions are being put in place to protect workers and shoppers from the novel coronavirus. But while some shoppers have been quick to follow protocols and wear masks, others have resorted to violence to express their lack of concern. Two brothers in Los Angeles, California, broke a security guard’s arm for confronting them about their refusal to wear a mask inside a Target, police said. The men entered the store without face coverings. This prompted employees to ask them to put on masks. When they refused, they were escorted out.

Video footage shared on social media depicts the two men injuring a security guard. According to the Los Angeles Police Department, the incident took place on May 1. A group of four security guards was escorting the two men out of the store when one of the two men began hitting the guards, ABC News reported. As a result, one of the guards suffered a broken arm. Other injuries have not been reported.

“As they approached the exit, one of the suspects suddenly and without provocation turned and punched the store employee, causing him and the suspect to fall to the floor,” Drake Madison, a spokesperson for the Los Angeles Police Department told the Los Angeles Times. While on the ground, one man broke the employee’s left arm. The second suspect then joined in, surveillance footage confirmed; two other Target employees are then seen trying to restrain him.

The brothers, identified as Philip Hamilton and Paul Hamilton, were later arrested on suspicion of felony battery, police said. According to the Los Angeles Police Department, both of the men are homeless. Records indicate that while they were initially held in custody with bail set at $50,000, they were released on May 5.

In a statement to CBS News, a spokesperson for Target called the incident “unfortunate” and emphasized that the safety of customers and employees is the company’s top priority.  “We’re grateful for the support of local police and we’ll provide any information that can be helpful to their investigation,” the statement said.

These incidents are not isolated. In Michigan, a security guard at a Dollar General store was brutally murdered when a woman refused to wear a mask, Daily Kos reported. Essential workers across the country are risking infection and now face potential physical harm as individuals rebel and retaliate against regulations.