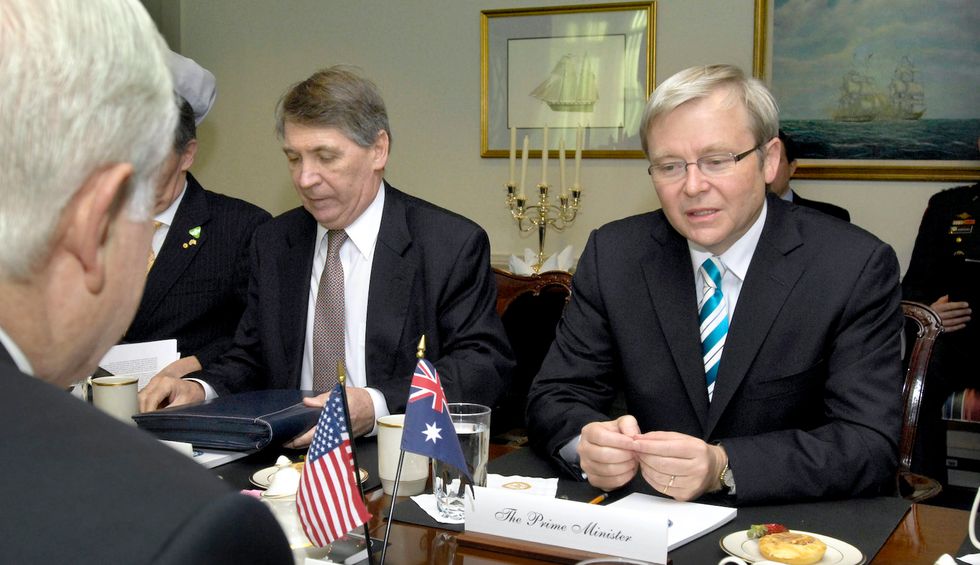 Australian Prime Minister Kevin Rudd (right) meets with Secretary of Defense Robert M. Gates (left) in the Pentagon on March 25, 2009. Under discussion is a range of security issues of mutual interest to both nations. Among those participating in the talks is Australian Ambassador to the United States Dennis Richardson (2nd from right). DoD photo by R. D. Ward.
Cody Fenwick
May 07, 2020World

Former Australian Prime Minister Kevin Rudd published an incisive piece in Foreign Affairs on Wednesday dissecting the international consequences of COVID-19 and the effects it will have on the globe's great power struggle between the United States and China.

He argued that, despite some expectations that China is weathering the crisis's domestic risks well, the Communist Party will certainly be damaged by the fallout at home. But he saved him most devastating and whithering critiques for the United States, the Trump administration, and Trump himself in particular. His remarks offer a useful glimpse into how the world perceives the American handling of the crisis.

Rudd deemed the Trump adminsitration's management of the crisis as "chaotic," saying that it "has left an indelible impression around the world of a country incapable of handling its own crises, let alone anybody else's." And it is cementing the internal divisions in the country, which he believes add "a further constraint on U.S. global leadership."

His remarks about Trump, in particular, are blistering:

The world has watched in horror as an American president acts not as the leader of the free world but as a quack apothecary recommending unproven “treatments.” It has seen what “America First” means in practice: don’t look to the United States for help in a genuine global crisis, because it can’t even look after itself. Once there was the United States of the Berlin airlift. Now there is the image of the USS Theodore Roosevelt crippled by the virus, reports of the administration trying to take exclusive control of a vaccine being developed in Germany, and federal intervention to stop the commercial sale of personal protective equipment to Canada. The world has been turned on its head.

If Trump is re-elected, he wrote, it "will mean greater decoupling and possibly attempted containment, driven by Trump’s base and widespread national anger over the origins of the virus, although this strategy will be rendered incoherent at times by the president’s personal interventions." China's leadership, he argued, would prefer this outcome because "it sees value in his tendency to fracture traditional alliances, to withdraw from multilateral leadership, and episodically to derail the United States’ China strategy."

And it's not just the coronavirus that has revealed these failings. Russ argued that the weakening of the United States' global position was happening before the pandemic:

Prior to the current crisis, the postwar liberal international order was already beginning to fragment. The United States’ military and economic power, the geopolitical fulcrum on which the order rested, was being challenged by China, first regionally and more recently, globally. The Trump administration was adding to the order’s problems by weakening the U.S. alliance structure (which in conventional strategic logic would have been central to maintaining a balance of power against Beijing) and systematically delegitimizing multilateral institutions (effectively creating a political and diplomatic vacuum for China to fill). The result has been an increasingly dysfunctional and chaotic world.

He warns that we're at serious of a new cold war. But to avoid it, the United States and China both need to change track and adopt a conciliatory posture to avoid an impending confrontation.