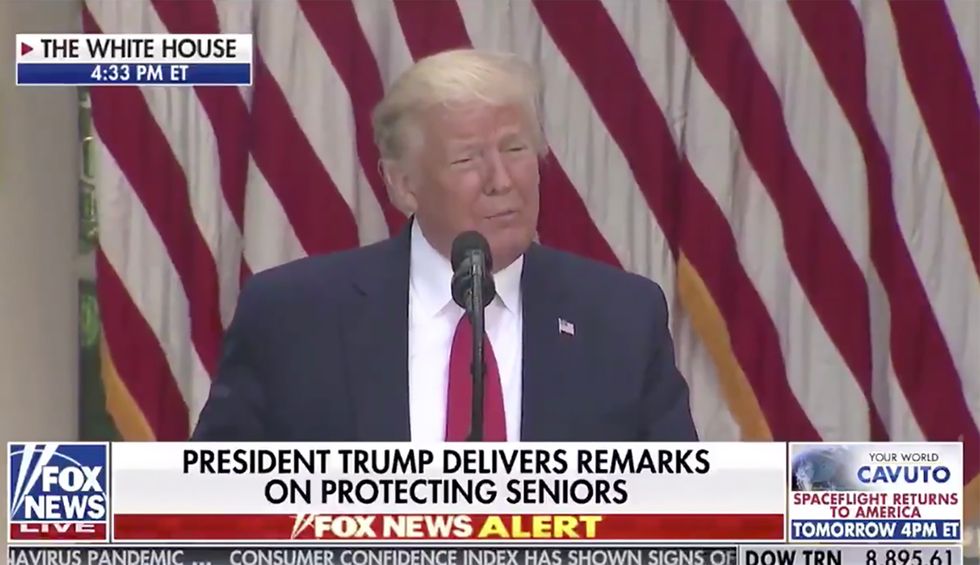 President Donald Trump mused about taking insulin during a White House event for seniors with diabetes, even though he does not have the disease.

"I don't use insulin," Trump said. "Should I be? Huh? I never thought about it, but I know a lot of people are very badly affected, right? Unbelievable."

As the National Institute of Diabetes and Digestive and Kidney Diseases explains, insulin is a hormone produced by the pancreas. People with Type 1 diabetes cannot produce insulin and people with Type 2 diabetes have problems with insulin production, so they often require several doses each day.

Reporters in the room were skeptical of the president's claim.

"Is there any reason why someone who does not have diabetes would take insulin?" a reporter asked. "Is there any sort of medical reason for that?"

Trump asked Surgeon General Jerome Adams to respond. Adams explained to the president that people without diabetes do not need to take insulin.

"Your body, Mr. President, actually makes insulin endogenously, and people such as you and I — we make our own insulin," he said. "So, yes, we do utilize insulin, but we make it ourselves."

Trump still did not seem to understand why there was anything off about someone without diabetes taking insulin.

"The question I found to be a very interesting one, but is that an unusual question or an unusual circumstance?" Trump asked. "I thought it was a very good question, actually."

The exchange came after Trump has floated a number of medically bizarre suggestions during his remarks on the new coronavirus.

Trump claimed that he took a two-week course of the anti-malarial drug hydroxychloroquine as a prophylactic despite no evidence that it works that way. A large study published last week found no benefits from the drug for coronavirus patients and was the second recent analysis to record a higher death rate among those who took the drug compared to those who did not.

The World Health Organization halted a trial of the drug, and France banned the drug as a coronavirus treatment after the study was published. Dr. Anthony Fauci, the top infectious disease expert in the country, said Wednesday that "clearly the scientific data is really quite evident now about the lack of efficacy for it."

Trump, however, lashed out at researchers who published findings disputing the drug's efficacy, labeling one such study a "Trump-enemy statement."

Trump has floated the idea of injecting disinfectant into people's bodies to "clean" the lungs, which every medical expert warned would be deadly. Trump has also suggested bringing an ultraviolet light "inside the body" after an official noted that the virus does not survive well in sunlight.

Despite pushing potentially dangerous medications and incredibly dangerous disinfectant injections, Trump has rejected experts' advice on ramping up widespread coronavirus testing, calling it "overrated." He has also mocked former Vice President Joe Biden and reporters for wearing masks in public, as recommended by every leading expert.

After appearing to criticize Biden for wearing a mask on Twitter, Trump complained that a reporter wearing a mask at Tuesday's event was trying to be "politically correct."

Trump's comments are particularly concerning after his past remarks have led to worries about hydroxychloroquine shortages for people who actually need it and increased calls to poison control centers about exposure to household cleaners and bleach.

Trump has argued that he knows quite a bit about medicine, even though doctors have had to repeatedly warn that his advice could be deadly.

"I like this stuff," Trump said while visiting the Centers for Disease and Control headquarters in Atlanta in March. "I really get it. People are surprised that I understand it. Every one of these doctors said, 'How do you know so much about this?' Maybe I have a natural ability."