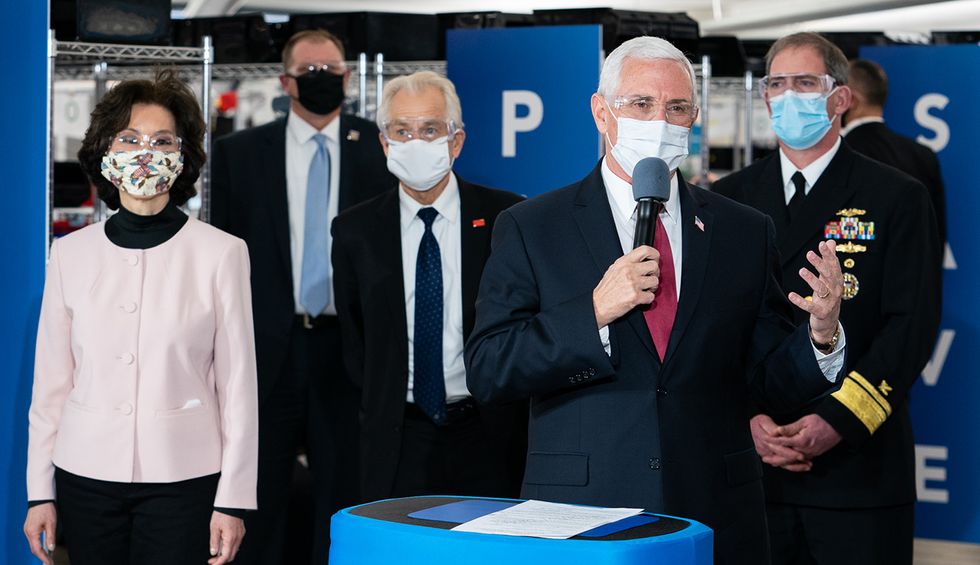 In early 2018, an incoming Trump political appointee and ally of Vice President Mike Pence made an unusual suggestion to a United Nations agency whose funding hinged on support from a skeptical Trump administration: He pitched them to do business with one of his private-sector clients.

“Might merit your team’s consideration,” Max Primorac wrote in January, weeks before he formally started at the U.S. Agency for International Development, where he would eventually become an adviser to Pence.

The client pitch by an incoming official sparked a complaint a month later from an anonymous State Department official, according to documents obtained by ProPublica. The U.N. agency, the United Nations Development Program in Iraq, had by then received over $190 million in funding from USAID, the complaint said.

Virginia Canter, chief ethics counsel at Citizens for Responsibility and Ethics in Washington, said Primorac’s email demonstrated “poor judgment,” given the significant financial contribution that USAID makes to the UNDP.

“He wasn’t yet subject to the government standards of conduct, but he was right on the threshold of that,” Canter said. “He gave the appearance that he was using the office he was about to take for the private interests of his client.”

Primorac’s pitch did not result in UNDP business for his former client. But it is the latest instance to come to light of Primorac’s behavior raising eyebrows among some of his colleagues in the U.S. government. Last year, Primorac expressed confidence during a State Department forum that President Donald Trump would win reelection, a comment that drew a complaint to an independent agency, which determined that Primorac did not violate a law forbidding government officials from engaging in political activities on the job.

And ProPublica reported last year that in the midst of a drive by the White House, particularly by Pence’s office, to steer more USAID funding to Christians in Iraq, Primorac publicly praised a charity primarily serving Iraqi Christians that had applied for funding, months before the final grants were announced.

An acting USAID spokesperson, Pooja Jhunjhunwala, did not respond to specific questions about Primorac’s email but said the agency “has an extensive system of ethics training, mandatory reporting, legal review, recusal and counseling procedures.” Primorac did not respond to questions.

In the Jan. 10 email, Primorac touted Qi Card, an Iraqi debit card, and suggested that the UNDP use it for transactions. Primorac identified his client as Markez, a U.S. firm hired at the time by Qi Card’s parent company to help build the card’s customer base, according to Mark Crego, a former Markez adviser.

The ethics complaint by the State Department official noted that the UNDP was a major USAID funding recipient as it tried to rebuild parts of Iraq destroyed by a protracted war with the Islamic State militant group. Pence had made clear that U.S. support to the UNDP was in jeopardy when he said in October 2017 that the Trump administration would stop funding “ineffective” U.N. programs in Iraq and criticized the organization for not doing enough to help Iraqi Christians.

ProPublica reported last year that career USAID and State Department officials came under sustained White House pressure, particularly from Pence’s office, to give more money to Christians in Iraq, which along with other religious minorities make up about 2% to 3% of the country’s population. In addition to the public criticism of the U.N. by Pence in October 2017, Trump appointees pushed in internal meetings for USAID to pay more attention to Christians.

The inspector general’s office declined to comment on whether it opened an investigation into the complaint, and there is no evidence that Primorac’s email resulted in new business for Markez, which originally launched as a construction company before taking on the biometric card project. “UNDP Iraq has not had any business with Qi Card,” Dylan Lowthian, a UNDP spokesman, said.

Primorac’s email to the UNDP surfaced as part of a broader records request from ProPublica, seeking complaints made to the USAID watchdog about the agency’s work in Iraq between 2017 and 2019. The agency responded by releasing 133 pages of documents, the majority of which consisted of USAID-funded organizations self-reporting potential misconduct by employees. Two complaints focused on Primorac, the only USAID official whose conduct was questioned in the emails released to ProPublica.

The second complaint about Primorac in the documents accused him of favoring one Iraqi Christian sect over another as he disbursed U.S. funding to groups in the country’s north. Insiders who are familiar with the dynamics of the Iraqi Christian community said they were skeptical of that complaint’s merit.

Primorac has moved back and forth between the government and private sector in the past two decades.

After the U.S. invaded Iraq in 2003, he served in the Coalition Provisional Authority, the U.S. occupation government that controlled Iraq until 2004, and he held State Department positions focused on Iraq during the rest of the Bush administration.

He then launched the Washington, D.C.-based consulting company Between Two Rivers LLC, and his clients included the governments of Japan, Canada and Iraq, according to archived versions of the firm’s website.

In his January 2018 email to UNDP officials, Primorac suggested the agency could use the Qi Card for transactions.

“Full disclosure: the (redacted) for Qi Card, US-based Markez, is my client, though I am shutting down my practice end of this month,” Primorac wrote.

Markez, founded more than a decade ago in Maryland by Iraqi American businessman Samer Skooti, initially focused on construction. The firm expanded into project management, and International Smart Card hired Markez to provide “subject matter expertise” and help it comply with international standards, Skooti said in an interview.

International Smart Card paid for lobbying that Markez conducted in 2016 and 2017 on “promotion of biometric payments,” according to lobbying records.

The business relationship between Markez and Primorac lasted no more than three months, Skooti said. “It was a project-based engagement.”

Primorac joined USAID in February 2018 in its Middle East bureau. Tensions at USAID peaked in June 2018, when Pence was displeased by new grants in Iraq, which had gone to large, established aid groups and not local Christian organizations. USAID officials scrambled to create new programs and convince Pence and his staff that the agency was paying enough attention to Christians and Yazidis, another religious minority in Iraq.

Amid the upheaval, Primorac was elevated in late 2018 to a new role based in northern Iraq: USAID’s special representative for minority assistance programs. He has described himself as the vice president’s “special envoy,” briefed Pence’s office on his work and is known among U.S. officials for his close working relationship with Pence’s staff. Since returning from Iraq several months ago, he has taken on an expanded role, as chief adviser for international religious freedom to USAID’s administrator, according to his LinkedIn profile.

Pence’s spokesperson did not respond to a request for comment.