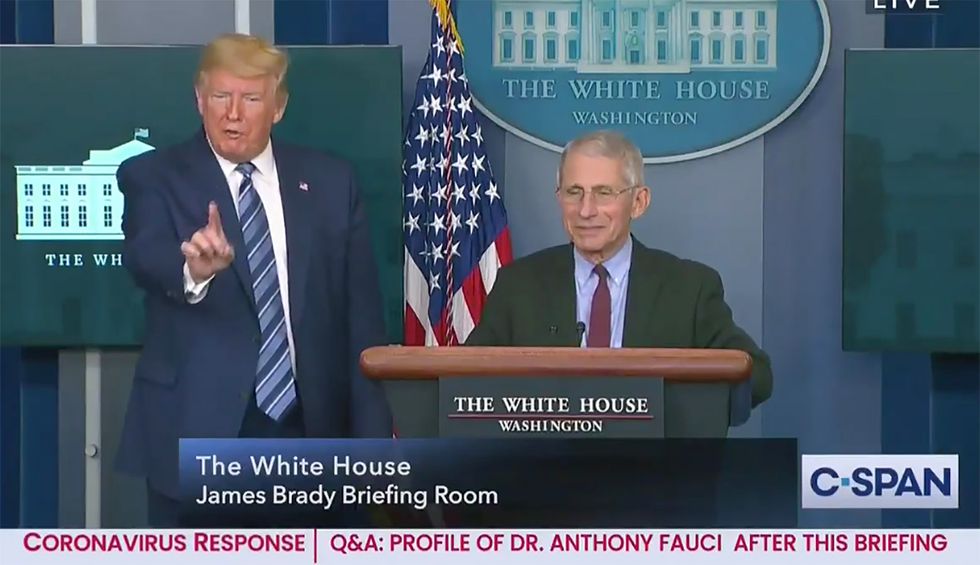 Image via Screengrab.
Jake Johnson
and
Common Dreams
May 25, 2020

A study published Friday in a prestigious medical journal found that the anti-malarial drug President Donald Trump claims he is currently taking—and has repeatedly urged others to take—is not effective for treating Covid-19 and could increase risk of heart problems and death in coronavirus patients.

The study, published in The Lancet, examined the medical records of 96,000 hospitalized coronavirus patients on six continents and found that "drug regimens of chloroquine or hydroxychloroquine alone or in combination with a macrolide was associated with an increased hazard for clinically significant occurrence of ventricular arrhythmias and increased risk of in-hospital death with Covid-19."

The authors found "no evidence" of benefits from hydroxychloroquine in Covid-19 patients—a result that is consistent with the findings of previous studies on the drug, which is most commonly used as a treatment for malaria, lupus, and rheumatoid arthritis.

NEW Research—No evidence of benefit for #chloroquine and #hydroxychloroquine in #COVID19 patients, urgent randomise… https://t.co/n5Kc8g6CrY
— The Lancet (@The Lancet)1590150545.0

Eric Topol, a cardiologist and director of the Scripps Research Translational Institute, told the Washington Post that "it's one thing not to have benefit, but this shows distinct harm."

"If there was ever hope for this drug, this is the death of it," said Topol.

Sen. Ed Markey (D-Mass.) tweeted that "the science is clear and the president, as usual, is dangerously wrong."

The new study comes just days after Trump told reporters that he has been taking hydroxychloroquine daily for over a week in an effort to prevent Covid-19 infection.

"I get a lot of tremendously positive news on the hydroxy," Trump said Tuesday, "and, you know, I say, hey... what do you have to lose?"

Trump has repeatedly promoted the drug as a possible treatment for coronavirus despite warnings from medical professionals that there is no evidence it is effective for Covid-19 patients. Retail sales of hydroxychloroquine reportedly soared in March, the month Trump called the drug a "game changer" for treating coronavirus.

"There is no evidence of benefit and there is evidence of harm," Dr. Rob Davidson, an emergency care physician and executive director of the Committee to Protect Medicare, said after the president claimed he's taking the drug. "Trump is responsible for the deaths of tens of thousands. Let’s not add to that number."

On April 24, the Food and Drug Administration cautioned against the use of hydroxychloroquine "outside of the hospital setting or a clinical trial due to risk of heart rhythm problems."

In a segment on NPR earlier this week, medical researchers and others explored the politicization of drug treatments as a sad development to emerge during the Covid-19 pandemic, with many placing the blame squarely at the feet of a president who has sidelined experts while injecting his own uninformed and often ridiculous claims into the national conversation.

Dr. Davey Smith, head of Infectious Diseases and Global Public Health at the University of California San Diego School of Medicine, interviewed on the segment, said, "In reality, the virus doesn't care about politics and science should also not care about politics. I just want an answer one way or the other."