Mitch McConnell accelerating plan to place at least one more justice on Supreme Court before the election: report 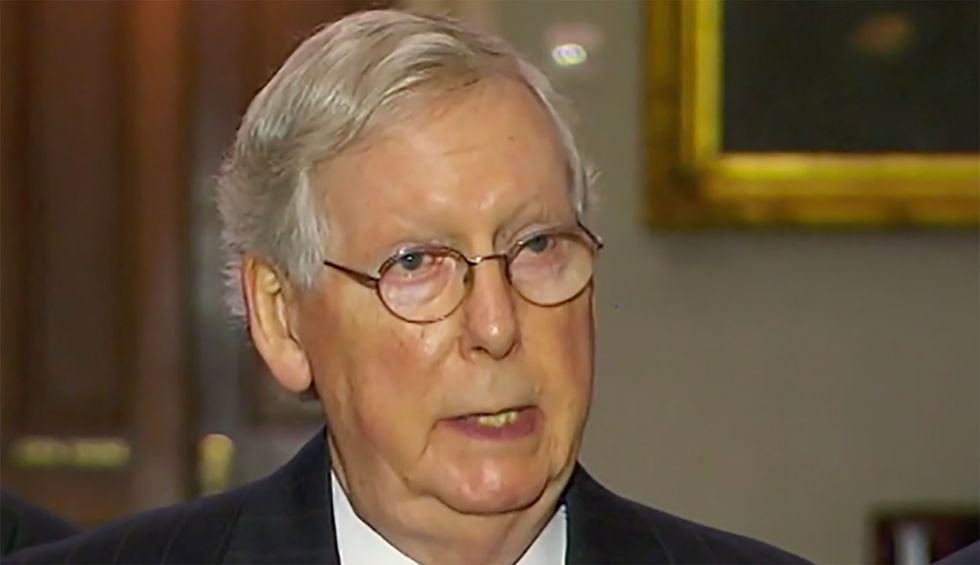 Image via Screengrab.
Tom Boggioni
and
Raw Story
May 08, 2020Documentaries

According to a report from Politico, Senate Majority Leader Mitch McConnell (R-KY) and his fellow Republicans in the Senate are setting the stage to rush through a nomination to the Supreme Court as quickly as possible should a seat become open before the November election.

According to one senior Republican, Sen. John Barrasso (WY): "We’re going to fill it”

With an eye on the health of Justice Ruth Bader Ginsburg, who was briefly hospitalized this week again, GOP senators are dead set on placing another conservative on the court out of fear that may lose control of the chamber in November.

"Justice Ruth Bader Ginsburg’s hospitalization this week and the looming end of the Supreme Court’s term raise the prospect of yet another prized vacancy for President Donald Trump. And if there is a surprise opening or retirement in the months before the presidential election, GOP senators plan to act on it, despite denying President Barack Obama a Supreme Court seat in an election year," the report states. "Republicans say they wish Ginsburg a swift recovery and have no inside knowledge of a retirement but are prepared to move if a vacancy presents itself."

Noting the battle to place Brett Kavanaugh on the court despite serious allegations of sexual misconduct, Republicans expect an even larger fight in light of McConnell's refusal to take up President Barack Obama's nomination of Merrick Garland to replace the late Antonin Scalia.

“If you thought the Kavanaugh hearing was contentious this would probably be that on steroids,” explained Sen. John Cornyn (R-TX). “Nevertheless, if the president makes a nomination then it’s our responsibility to take it up.”

"While no one says they expect a Supreme Court vacancy, GOP senators also acknowledge it’s plausible that Trump could find himself with a third nominee. And one thing is clear: Most Republicans have no qualms about approving a Supreme Court pick from a president in their own party, even if it is an election year," the report continues. "In 2016, Senate Majority Leader Mitch McConnell (R-Ky.) said voters should decide in the election which president should choose the next Supreme Court justice. But in the Trump era, he’s repeatedly asserted that he would fill a vacancy in 2020. McConnell and his allies argue the situation is different because. Republicans control both the White House and the Senate. They say that makes the situation far different than when Obama was president and McConnell refused to even hold a hearing for Merrick Garland."

"Democrats acknowledge they could get run over in the next eight months. Supreme Court nominees can now be confirmed by a bare majority after McConnell changed the rules in 2017 to overcome a Democratic filibuster of Neil Gorsuch, Antonin Scalia’s successor," Politico's Burgess Everett wrote.

While Senate Judiciary Chairman Lindsey Graham (R-SC) has declined to say there if will be a cut-off should a new vacancy open up, another Republican senator stated he is ready to move if the opportunity comes up.

"In addition to Ginsburg’s health, senators are also keeping tabs on whether any other justices will retire. Four justices are 70 or older: Ginsburg, Stephen Breyer, Clarence Thomas and Samuel Alito," the report notes.