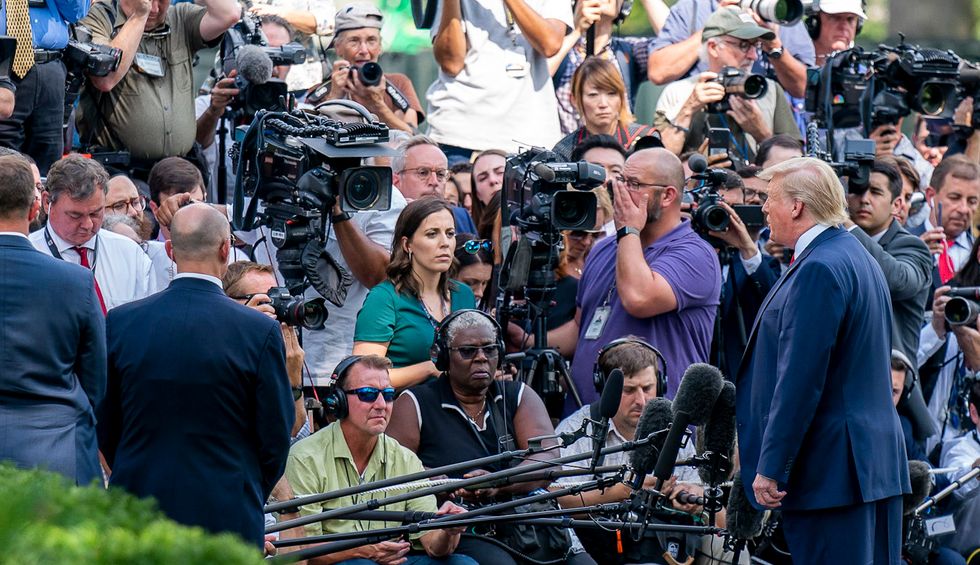 President Donald J. Trump speaks with reporters on the South Lawn driveway of the White House Thursday, Aug. 1, 2019, prior to boarding Marine One to begin his trip to Cincinnati. (Official White House Photo by Tia Dufour)
Walter Einenkel
and
Daily Kos
May 19, 2020

The Trump campaign is going into overdrive. Along with the rest of the Republican Party, the push to blitz the media landscape with misinformation has ramped up as the coronavirus pandemic has laid bare the complete ineptitude of the current administration. Donald Trump’s strategy, as always, is to lie about how good a job he is doing, while alternately saying his failings (even though he’s telling you he has none) are to be blamed on shadowy conspiracies by other leaders. The Republican handbook for this stipulates that you pepper your political opponent with semi-circumstantial accusations of corruption and dirty dealings. They do this because no matter what defense one puts up, the goal posts of such attacks are always moving, as they can neither be proven or disproven to 100% satisfaction.

On Monday, armed with a website and a video saying that Joe Biden’s political party was the Chinese Communist Party (not a joke), the Trump campaign announced the launch of the “’TRUTH OVER FACTS’ INVESTIGATIVE WEBSITE.”

George Orwell wrote in 1984 that his concept of Doublethink was “The power of holding two contradictory beliefs in one’s mind simultaneously, and accepting both of them… To tell deliberate lies while genuinely believing in them, to forget any fact that has become inconvenient, and then, when it becomes necessary again, to draw it back from oblivion for just so long as it is needed, to deny the existence of objective reality and all the while to take account of the reality which one denies – all this is indispensably necessary. Even in using the word doublethink it is necessary to exercise doublethink. For by using the word one admits that one is tampering with reality; by a fresh act of doublethink one erases this knowledge; and so on indefinitely, with the lie always one leap ahead of the truth.”

“Doublethink” and “Newspeak” have been paraphrased as “Doublespeak” in the American lexicon over the years. This was an important tool of the fascistic superpower that Orwell’s fictional Oceania employed on the population, in order to control it. Just like the Republican Party of today, Orwell’s projections of the fascistic tendencies of 20th century communist and national socialist movements end up being more applicable to oligarchical democratic powers that be.

Looking at the Trump administration’s use of “Doublethink” is only a part of the story. Current U.S. Attorney General William Barr is using his power of office to do the bidding of our current fascist in power, Donald Trump. When asked about how this might look at the end of the day, Barr gave another 1984 explanation: “Well, history is written by the winner.”

Trump’s campaign is going after Joe Biden, and will throw Hunter Biden in the mix. He will throw China into the mix, and he will throw whoever he tells his base is the “enemy” into the mix. Then, if successful, he will turn around and sell the children of that very same support base back to the “enemy” he has created, and tell them that “War is Peace,” and that “Freedom is slavery,” and “Ignorance is strength.”