Here's the truth about the media's so-called 'liberal bias' 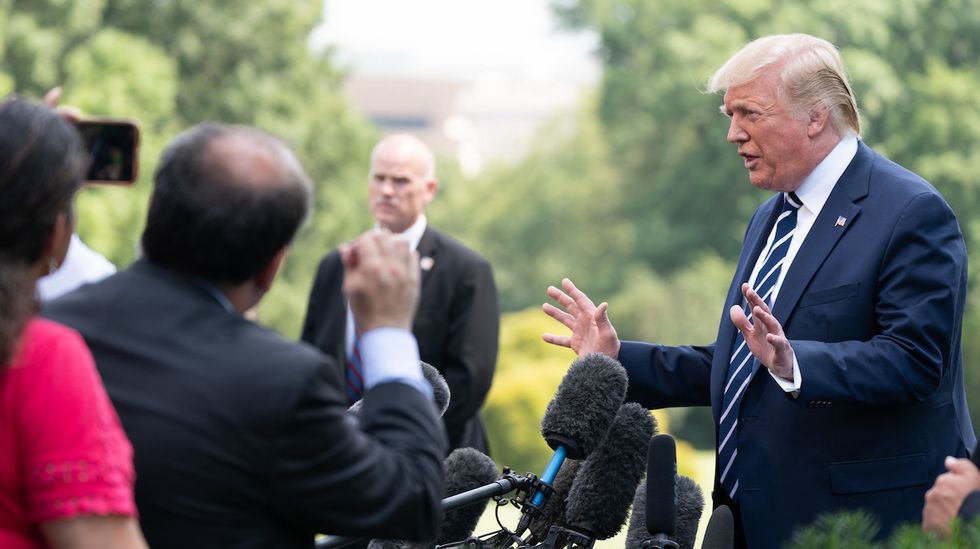 President Donald J. Trump talks with reporters along the South Lawn of the White House Friday, July 19, 2019, prior to boarding Marine One to begin his weekend trip to Bedminster, N.J. (Official White House Photo by Shealah Craighead)
The Conversation
May 19, 2020Media

During a recent trip to the Lincoln Memorial, President Donald Trump claimed that the media has treated him worse than any previous president.

Such claims are not new or limited to Trump. Political elites across the spectrum constantlycomplain about what the media covers and how they cover it. The public shares that distrust. Less than half of Americans say they can identify a source that they believe reports the news objectively, despite strong journalism norms aimed at minimizing bias.

But are voters and politicians right? Is the media really biased?

Wearepoliticalscientists who study journalists covering political news and the factors that affect political news coverage. In our research, conducted in 2017 and 2018, we examined media bias two different ways.

First, we studied whether the media displays bias by the stories they choose to cover. For example, a media outlet might cover a politician’s initial failure to respond to COVID-19 while another outlet chooses to bypass that story. This is what we call gatekeeping bias. What journalists cover, or their agenda setting, has a powerful effect on the issues people care about. Media bias, in other words, can occur if journalists ignore stories not aligned with their ideological preferences.

Second, we studied whether the media discussed stories differently – if they used a different tone or perspective to cover the same story. Two news outlets, for example, might cover a politician’s press conference very differently. News framing, studies show, has an effect on public opinion, though it’s often short-lived.

We found no evidence of the first form of bias – gatekeeping.

Although there is bias in how newspapers cover politics – the second kind of bias – the effects were largely limited to small shifts in tone. Moreover, our research shows that most newspapers are politically moderate, further reducing the impact of bias.

To test for gatekeeping and framing bias, we needed information about journalists’ ideological preferences and the ideology of the newspapers that employ them. In the survey, we asked journalists to “describe (their) own personal (political) ideology” on a five-point scale ranging from very liberal to very conservative.

To overcome this hurdle, we used a method that identifies an individual’s ideology using who they follow on Twitter. For people who also answered the survey, the results closely matched. This allowed us to estimate of the ideology of every political journalist in our sample on Twitter.

We found that most journalists are very liberal. The average journalist is to the left of prominent liberal politicians like former President Barack Obama.

However, simply being liberal does not make journalists biased.

To test for gatekeeping bias, we ran a correspondence experiment where journalists had a real coverage choice concerning a potential news story. We sent an email to every journalist requesting an interview for a purported candidate for a state legislature. Journalists randomly received an email from either a liberal or conservative candidate.

We found that journalists were just as likely to respond to very conservative candidates as very progressive candidates. Journalists also weren’t more interested in covering a candidate of their own ideology.

Yes, but what about how newspapers cover the story? Though the liberal media might cover all candidates, some may wonder if they simply write “hit pieces” about conservatives.

Using our survey, we identified the ideology of almost 700 local and national newspapers. We asked journalists to tell us the ideology of the newspaper where they worked, along with seven other well known media outlets such as The New York Times and Fox News.

Compared to national newspapers and other salient media outlets, our research shows that most local newspapers are moderate and very close to the ideological center.

To see whether newspaper ideology affected the tone of coverage, we downloaded every story available about President Trump during his first 100 days in office. To measure tone, we used Linguistic Inquiry and Word Count. This software estimates the emotional tone in written language on a scale from 0 to 100. If a story has a neutral tone, the software will score it a 50.

While there is a relationship between a newspaper’s ideology and the tone of coverage, the effect is small. We considered the average tone of three papers, one on the far right of our scale, one in the center, and one on the far left. For all three the tone is close to 50. Conservative newspapers are not overt Trump cheerleaders, and liberal outlets are not overly negative.

Our research also shows that there is no bias regarding which candidates newspapers cover. Additionally, there are only small shifts in the tone of coverage of one of the most polarizing news topics – Trump. Most newspaper coverage is moderate and exhibits few easily identifiable biases.

Contrary to President Trump’s claims, we find little blatant news bias in what the media covers and how it covers it. While the nature of politics encourages politicians to undermine negative coverage through claims of bias, our research suggests that ideological bias in U.S. newspapers is largely nonexistent.

[You’re smart and curious about the world. So are The Conversation’s authors and editors.You can read us daily by subscribing to our newsletter.]