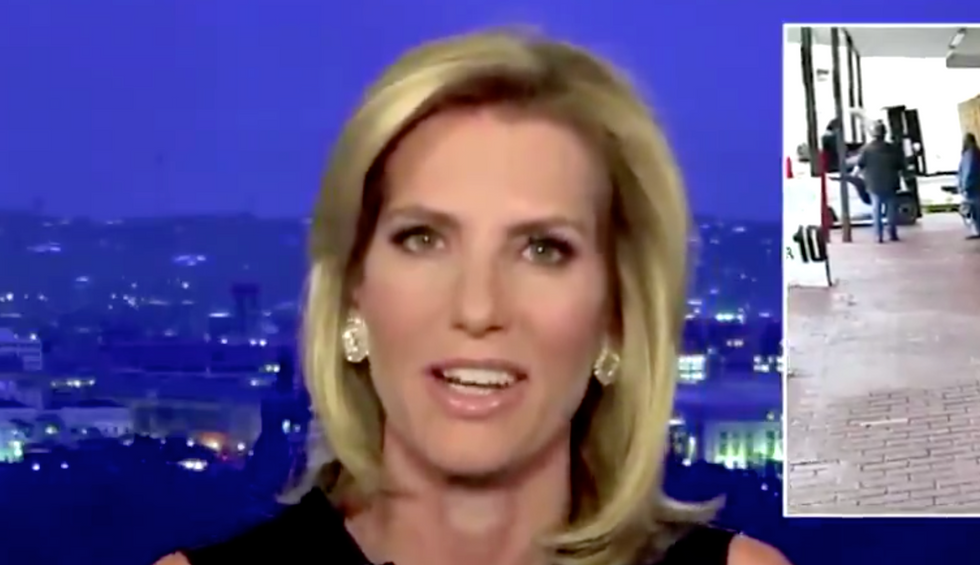 Fox News host Laura Ingraham, a political commentator who does not have a background in science, has used her platform to peddle the false claim that "there was no real scientific basis" to support federal social distancing guidance.

"Although, intuitively, I think it probably seemed like social distancing would be necessary, there was no real scientific basis for believing that since it had never been studied," Ingraham claimed during Monday's broadcast.

Those false comments were immediately rebuked by former Rep. Joe Walsh, a Republican who ran against Trump for the party's presidential nomination.

"Have I mentioned before that watching Fox News can get you killed?" he asked on Twitter.

Ingraham on Monday also cited an anonymous infectious disease doctor who allegedly told her that "trying to stop this virus with social distancing is like trying to drive a nail through Jell-O."

"Viruses spread — that's what they do. They often weaken as they go. And if it's like SARS — we hope it is — it'll eventually burn out as SARS did," Ingraham said, without clarifying whether she was still quoting the unnamed doctor.

The University of Washington's Institute for Health Metrics and Evaluation — creators of the IHME model ballyhooed by the Trump administration — has revised its estimation upward to nearly 135,000 COVID-19 deaths by August, or more than double its first projection of 60,000 deaths. (The U.S. has thus far recorded more than 70,000 deaths.)

The institute said it made the revisions based on relaxed social distancing guidelines, noting the "rising mobility in most U.S. states as well as the easing of social distancing measures expected in 31 states by May 11, [indicates] that growing contacts among people will promote transmission of the coronavirus." All models take into account varying degrees and durations of social distancing.

Ingraham, who has reportedly advised President Donald Trump on the pandemic even though she is not a doctor, once leaned on that same IHME model to support the same baseless claims about social distancing.

The initial, relatively low IHME projections, she contended in her commentary, meant the experts were wrong: The country did not have to establish a robust testing and tracing program before governments relaxed social distancing and opened the economy.

"And we're going to then like, keep America closed till we have 7 million tests a day or a week or whatever the heck the new number is?" she asked in mid-April. "I mean, that's — people have to think about that. I mean, think about whether it's even achievable before Election Day."

But the IHME model has always taken strict social distancing into account.

"Our model assumes social distancing stays in place until the pandemic, in its current phase, reaches the point when deaths are less than 0.3 per million people. Based on our latest projections, we expect social distancing measures to be in place through the end of May," the institute previously told CNN.

Ingraham and her Fox News primetime colleagues have repeatedly downplayed the global pandemic and pushed conspiracy theories and junk science on their primetime programs as they seemingly prioritize politics over science. Ingraham last week cast a dangerously paranoid conspiracy theory that the federal government's recommendation that people wear masks was a plot to sow "fear and intimidation" and preclude dissent.

The new coronavirus is in fact a version of SARS (Severe Acute Respiratory Syndrome) called SARS-CoV-2, and the first version of SARS, which Ingraham is referring to, was also a coronavirus. But her analogy seems to be junk.

The reason SARS disappeared quickly had less to do with genetic mutations than with virus behavior. It rooted deep in the lungs, making it more lethal but less communicable. That high lethality meant infected individuals would not spread it as widely. Carriers with no symptoms spread COVID-19.

Though SARS did "weaken," it did not naturally weaken because it was around a long time, as Ingraham implied. In fact, it seems likely to have been the opposite — a genetic mutation occurred early in the outbreak.

A 2018 study published in the scientific journal Nature — authored by Christian Drosten, director of the Institute of Virology at the Charité Hospital in Berlin and titled "Attenuation of replication by a 29 nucleotide deletion in SARS-coronavirus acquired during the early stages of human-to-human transmission" — found that the world caught a lucky break during the first SARS outbreak (2002–03) when the virus lost a specific part of its genome in an early mutation that slowed its rate of replication.

Such a mutation is only effective early in an outbreak, when a virus does not have to compete with other strains, Drosten told Science Magazine in a recent interview.

"Sadly, this new virus doesn't have that deletion," he added.