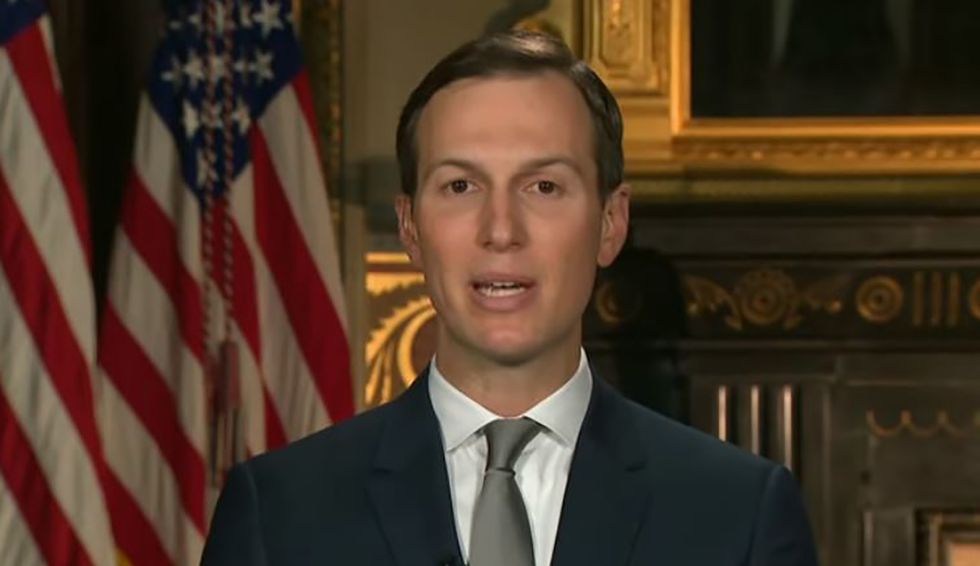 Elizabeth Spiers, who now serves as chief executive of the Insurrection, a progressive digital messaging firm, once worked for Jared Kushner as editor-in-chief of the New York Observer, a newspaper Boy Kush purchased when he was a callow 25-year-old — much younger, though equally as naive and gormless, as the callow 39-year-old he is today.

Well, she just wrote a savage op-ed about Little Lord Fauntleroy’s response to the coronavirus crisis, and it’s well worth reading in full.

The upshot? Kushner’s actions with respect to his new, completely unearned role at the vanguard of the government’s response could make Dunning, Kruger, et al., vomit their insides with the pertinacity and fervor of a downed fire hydrant.

There are oh-so-many choice bits, and you simply have to read the whole thing, but here are a few excerpts to whet your appetite (for reading, of course; you may be off actual food for quite some time after digesting this):

In any normal administration, an adviser with Kushner’s string of failures would be fired, but Kushner, like his father-in-law, keeps crediting himself with imaginary successes. Most recently, he declared the administration’s coronavirus response “a great success story,” a mind-boggling assertion that raises the question of what, if anything, Kushner thinks failure looks like. He has also continued to bash the actual experts, disputing their assessments and implying that they, not he, are the amateurs, and he is here to clean up their mess.

This is basically Kushner’s modus operandi, and it’s painfully familiar to me because he was my boss when I was the editor in chief of the New York Observer, which he had bought when he was 25. (I’ve written before about what he was like as a businessman.) One of the more memorable instances of this I witnessed was at a memorial service for a beloved longtime Observer staffer, Tyler Rush, who’d joined the paper well before Kushner bought it. When it came time for Kushner to say a few words, he launched into a supercilious monologue crediting himself with finally getting the paper published on time after what he described as chaos when he arrived. He also told an anecdote about Rush approaching him when he bought the paper to note that his staff was underpaid, which was true at the time, and true when I took the editor job years later. Kushner congratulated himself during the memorial for giving Rush and his production team the only raise that year because “unlike everyone else,” Rush hadn’t been lying to Kushner.

Instead of doing what’s necessary to respond to the pandemic, the White House has chosen to punt and made noise about winding down its covid-19 task force, which under the circumstances is akin to dropping out of a marathon at mile 2.4 and expecting a medal for having made any effort at all. Now that he’s failed to get PPE and ventilators out quickly, Kushner has been tasked with accelerating vaccine development, another job for which he has no qualifications or expertise. The project has been named “Operation Warp Speed,” ostensibly a descriptor of its ambitions for getting a vaccine to market quickly. But if it proceeds the way Kushner’s shadow task force has so far, it may simply describe the velocity with which the task force’s efforts slam into logistical walls because the driver is an amateur who shouldn’t have the keys to begin with.

But, oh, there’s so much more. Hit this here click-nozzle to witness Boy Blunder’s viscera spilling out onto the abattoir floor.

Enjoy. That is, if Trump and Kushner haven’t already murdered or maimed you with their arrogant incompetence.